Chargers want more than just to play spoilers for Vikings 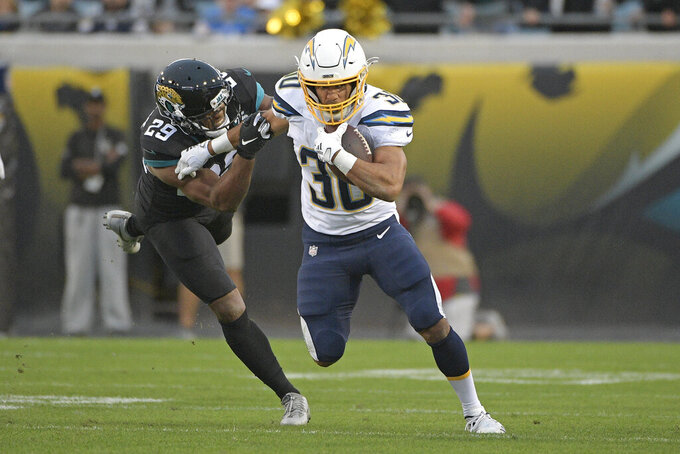 COSTA MESA, Calif. (AP) — The Los Angeles Chargers will have an effect on the playoff picture.

Just not the one they hoped for coming into this season, or the position the underlying statistics suggest they should be in.

The Chargers can play spoiler when they host the Minnesota Vikings on Sunday, which would help the Los Angeles Rams in their efforts to earn a wild card berth in the NFC. However, Chargers players said that helping out the team they will share a stadium with starting next season is not their main focus.

“We want to win for us,” quarterback Philip Rivers said. “It’s obviously been tough, every loss by one score, and obviously a tough stretch there right in the middle. So we’re playing for us. But certainly there’s a lot on the line for them. You know, the Rams are pulling for us as well, but it will be a heck of a game.”

The Chargers (5-8) were eliminated from playoff contention despite their 45-10 win at Jacksonville on Sunday, an emphatic rout that Rivers said reinforced how disappointing their inability to execute in critical moments has been.

Take away the knack for close losses, as the Chargers are 2-8 in games decided by one score, and most other metrics would indicate a team that should still be in the postseason chase. They are tied for third in yards per play (6.1), rank 11th in yards per play allowed (5.3) and eighth in points per game allowed (19.3). They have a plus-38 scoring differential, three touchdowns better than Pittsburgh, which currently holds the second wild card in the AFC.

But inopportune turnovers, penalties and gaffes have consigned the Chargers to being spectators for the eighth time in the past 10 seasons when the playoffs do arrive.

“It’s tough not to play the ‘what if’ game and the ‘woulda, coulda, shoulda’ game, especially being that the games were all so close, you know, every loss,” Rivers said. “It makes it tougher. Had we been blown out eight times, it’s hard to say we could have done this, could have done that, been sitting here differently. So it does make it tough to not do that, but we can only control what we have left.”

The Chargers already showed what they are capable of against an elite team from the NFC North in a 26-11 home win over Green Bay in Week 9. Now they can do so against the Vikings (9-4), who are one game ahead of the Rams for the second wild card in the NFC.

Rivers and running backs Melvin Gordon and Austin Ekeler helped the Chargers rack up 442 yards against the Packers, but they struggled in the red zone and on the edge of it to keep the game in doubt for longer than it should have been. Against a fundamentally sound Vikings defense, the Chargers know they will have to execute consistently like they did against the Jaguars.

Ekeler said the way they performed against Jacksonville was important in that it showed the Chargers could play well over the course of a game, not just in stretches. If they can do it again versus the Vikings, he thinks it could be a turning point for their future.

“It’s important for us just to, you know, try to put another consistent win together for us,” Ekeler said Wednesday. “Not necessarily motivated by spoiling them, but just for us, ourselves as individuals and our team.”

And if the Rams happen to benefit from it, “that’s great,” Ekeler said, “but we’re playing for people in this room.”

NOTES: LB Denzel Perryman will return to the starting lineup after he was sent home prior to the game against Jacksonville. “Last week, we had a disagreement, so he went home and he understands, and he’s back,” coach Anthony Lynn said. … CB Michael Davis will start after serving a two-game suspension for a violation of the NFL’s substance abuse policy, Lynn said. Second-year CB Brandon Facyson will continue to see action after performing well when Davis was out.