Chiefs could be even more explosive on offense this season 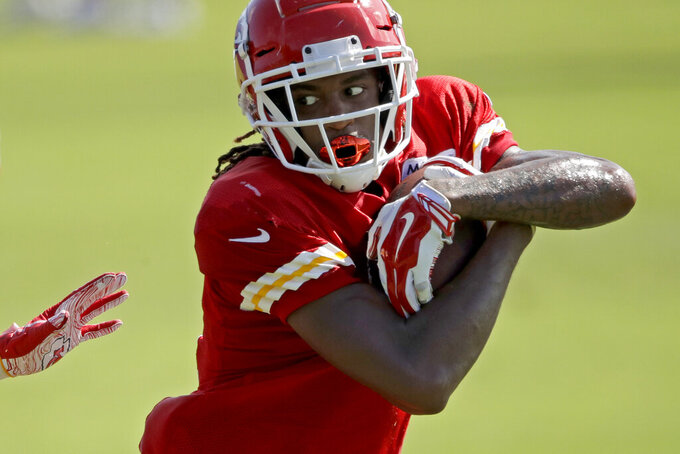 It made the Chiefs one of the most electrifying, entertaining offenses in football.

And it may have been merely a taste of what's to come.

While few believe the second-year starter will surpass the 5,097 yards and 50 touchdown passes that Mahomes had last season, there are many reasons to believe the Chiefs' quick-strike offense will be even more dynamic: the growth of their quarterback, the addition of speedy rookie wide receiver Mecole Hardman and the continued evolution of Tyreek Hill, Travis Kelce and Sammy Watkins.

Start with the mop-haired quarterback with the big arm.

Mahomes was an unknown quantity heading into last season, when he was given the reins of coach Andy Reid's complex offense following the offseason trade of Alex Smith. But he quickly proved that he was more than just a system quarterback from Texas Tech's air-raid factory, showing an uncanny ability to dissect defenses and make the proper read before unleashing one of the strongest arms in the NFL.

One year later, Mahomes has a full season of experience behind him. He has had time to look over game films, diagnosing and digesting how defenses began to counter him. He has poured himself into losing what he called "baby fat," and he spent hours over the summer fine-tuning his footwork.

"He knows it's a great challenge," Reid said. "You come out your second year, it's a huge challenge. These great defensive minds in the National Football League had an opportunity to study you and the offense for that matter. He's fired up about that and he's taking on that challenge."

One thing they probably learned is that safeties can never play deep enough.

Seventy-six pass plays went for at least 20 yards, more than twice as many as three other teams.

"As a competitor, I'm going out there and trying to be the best quarterback I can be," Mahomes said. "With the people around me, I think it is not about me trying to take a next step, it is about me just going within the offense and leaning on my teammates and letting them rise up with me."

So, what about those teammates?

The Chiefs drafted Hardman in the second round when they were still uncertain whether Hill would be available this season. The two have remarkably similar skills, led by their ability to blaze downfield — Hardman ran the 40-yard dash at the NFL combine in 4.33 seconds, second among all prospects.

Hill, who has been out of practice with a bruised quad, continues to evolve into a complete wide receiver rather than a simple speedster. The two-time All-Pro set a club record with 1,479 yards receiving last season, a good chunk of it coming on his four catches of 50-plus yards.

Kelce had a clean-up procedure on his ankle in the offseason, which could make one of the NFL's best tight ends even more dangerous after the catch. He briefly set the NFL record for yards receiving at his position last season, only for the 49ers' George Kittle to break it the same day.

Then there is Watkins, who is having perhaps the best offseason of his career. Offensive coordinator Eric Bieniemy has raved about Watkins' ability to get out of breaks faster, and the former first-round pick has managed to stay healthy after yet another season dragged down by injuries.

"I think all these guys have a chance to go out there and play," he said. "It's competitive."

Bieniemy passed the credit for that to general manager Brett Veach, who has quickly and efficiently compiled one of the best collections of skill players in the NFL.

"Let's give credit where credit is due," Bieniemy said with a wide grin. "They've done a hell of a job for us supplying quite a few guys that can do some things."

NOTES: Tremon Smith moved from CB to RB on Wednesday as the Chiefs seek to utilize his speed on offense. Smith hasn't played that side of the ball since he was a high school QB. ... Hill could return to practice Friday, Reid said. The Chiefs are off Thursday. Hill watched the workout, which moved indoors when a storm rolled through, with a compression sleeve on his right leg.