From functional to fancy, NFL stadiums have made a huge leap 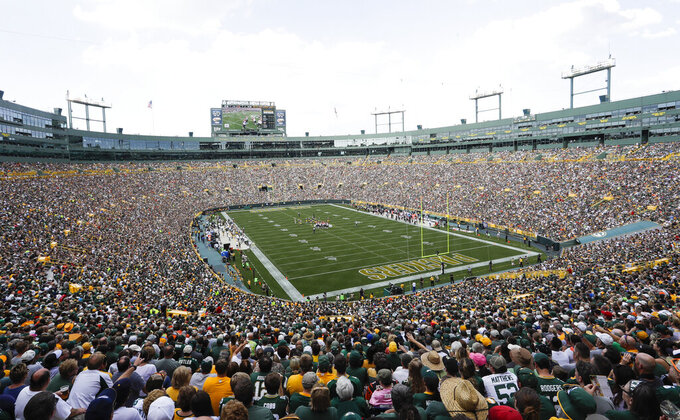 FILE - In this Sept. 24, 2017, file photo, Lambeau Field is seen during the first half of an NFL football game between the Green Bay Packers and the Cincinnati Bengals, in Green Bay, Wis. Opened in 1957 and eventually named for the famed franchise’s first head coach, Lambeau Field was considered the NFL’s first football-specific facility. (AP Photo/Morry Gash, File)

Next summer, the Raiders are slated to relocate to Las Vegas and begin playing in a sleek $1.8 billion dome with a transparent roof, a black glass exterior to match their boldest uniform color, and retractable doors to frame an 80-foot-tall and 215-foot wide view of the casinos on the strip.

Around the same time, the Rams and Chargers will settle in a Los Angeles suburb in a futuristic, covered-yet-light-filled stadium straight out of "The Jetsons" cartoon. It will be the centerpiece of a 298-acre entertainment and lifestyle complex originally projected to cost $2.6 billion that could come close to doubling in price.

Two years ago, the Falcons moved into Mercedes-Benz Stadium, a $1.6 billion facility in Atlanta with a pinwheel-like cover that opens and closes like a camera lens. The season before that, the Minnesota Vikings arrived at U.S. Bank Stadium, a $1.1 billion venue with the league's first translucent roof , five pivoting glass front doors facing the Minneapolis skyline, and a ship-like shape reflecting the region's Nordic heritage after extensive cultural research by the designing architectural firm HKS.

In 2010, the New York Giants and New York Jets kicked off at $1.6 billion MetLife Stadium in New Jersey with an official NFL-high seating capacity of 82,500. In the previous year, the Dallas Cowboys unveiled their new $1.1 billion suburban home with a high-definition, four-sided, center-hung videoboard that's 160 feet long, equal to four city buses, and 71 feet high.

These venues being added to the league over the last decade sure have taken quite the leap from Lambeau Field.

Of course, even that hallowed home of the Green Bay Packers that opened in 1957 has undergone two significant renovations since the turn of the century. The NFL's smallest city has modernized and monetized the stadium and surrounding development.

Of the current 32 teams, seven remain in facilities erected prior to 1995 — sort of. One, the Chicago Bears, moved out in 2002 so Soldier Field could be completely rebuilt on the same site. Only the exterior colonnades endured the $690 million renovation. The Miami Dolphins had Hard Rock Stadium (1987) remade for $500 million.

Attending a game has become as much about experiencing the immediate area and enjoying the amenities as simply watching four quarters of football.

"They have a personality. They have a powerful formal expression. They do things to create an iconic, globally recognizable facility," said Bryan Trubey, a principal architect at HKS, the lead designer on the Rams-Chargers, Vikings, and Cowboys projects. "For a billion dollars, you should get something that the rest of the world looks at and recognizes instantly, whether there is a name on it or not."

The league has embarked on its 100th season, triggering a natural reflection on the transformation of the game from humble, helmetless beginnings to a business with more than $14 billion in annual revenue that draws more 100 million people to watch the Super Bowl on television. Perhaps no aspect has evolved more drastically than the places where these games are played.

"Without the people present to make the stadium a reality, they never would have happened, but stadiums can and should be celebrated for the moments in history that occurred within their confines," said Eric Grubman, a former NFL executive who worked heavily on the development of new venues. "The great game, the great sadness, the great celebration, whatever it may be."

According to Pro Football Reference's online database , 166 stadiums have hosted at least one regular season game since the NFL began. That includes rival leagues — the All-American Football Conference (1946-49) and the American Football League (1960-69) — that were eventually absorbed. One hundred of those venues have hosted 17 games or more.

Over the first half of the league's life span, teams were frequently shoehorned into baseball parks where baseball clubs took top billing. The Bears played at Wrigley Field for 50 seasons. The Giants had long-time homes at the Polo Grounds and Yankee Stadium. The Cardinals, now in Arizona after moving from St. Louis, were tenants at Comiskey Park and Wrigley Field where the franchise originated in Chicago.

Then there were the pre-war public works projects like Los Angeles Memorial Coliseum, where the Rams returned in 2016 from St. Louis after first playing there from 1946-1979. Cleveland Municipal Stadium housed the Browns for a half-century before their move to Baltimore that embittered the lakeside city.

On through the AstroTurf era of the 1960s and 1970s, when several teams moved with their baseball counterparts into cookie-cutter circles with few frills, stadiums were still primarily taxpayer funded. By the time the mid-1990s came, though, multi-purpose was out. Fancy was in.

Owners began pumping in their own money in search of new revenue streams from premium seating areas and chef-driven concessions, aided in part by an NFL loan program known as "G-4" funding . As the price tags for construction surged, so did the public costs, even if the percentage share was much lower than in the past. Many of these modern projects came with predictable controversy. Anti-stadium forces often were passionate enough to be driven by both conservatives and liberals decrying the sizes and purposes of the subsidies. Proponents, meanwhile, touted municipal benefits such as sales tax revenue, job creation and civic pride.

According to an Associated Press calculation of at-the-time, publicly reported construction costs, not factoring for inflation, the NFL's current 31 stadiums cost a collective $17.7 billion to build. The average public share was roughly 55%, with 45% from private capital. MetLife Stadium and the soon-to-open complex in Los Angeles did not seek direct taxpayer contributions.

"When you find the examples of the ones that really do help the city, behind it is almost always an owner who actually knows what he's doing," said Roger Noll, a Stanford professor of economics, in a 2017 interview. "That is to say he's someone who cares about the city, and he really wants it to be improved. So he doesn't just max out for himself. He tries to build something that's going to be more integrated, where the facility is more integrated into the businesses around it as opposed to competing with them."

That's the name of the stadium game these days: the live experience. With the ease of watching games in ultra-HD from the comfort of the couch, NFL teams have faced more of a challenge than ever to keep fans coming through the doors. What they'll always be able to offer, of course, is the communal satisfaction that comes from seeing the winning touchdown in real time while the roar of 60,000 fans fills the building.

Grubman, now chairman of the board for the hospitality company On Location Experiences, recalled taking his then-teenage sons to Lambeau Field for the NFC championship game after the 2007 season between the Giants and the Packers. The wind chill factor at kickoff was 23 degrees below zero. No longer interested in the box seats or luxury spaces their father had access to, the boys persuaded dad to sit in the seats.

"I froze, and I loved it, because I'm an old fan myself," Grubman said.

After the game, they asked to walk on the field.