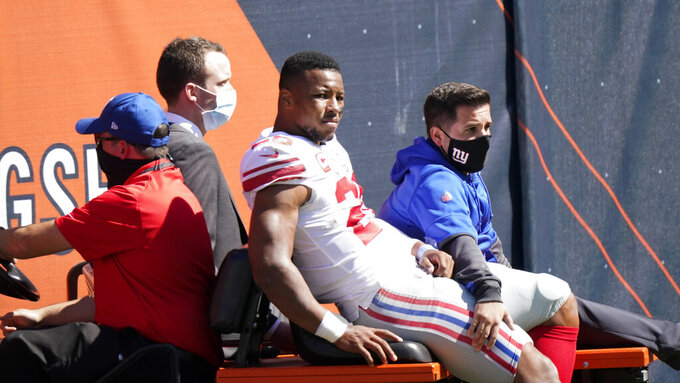 New York Giants running back Saquon Barkley (26) is carted to the locker room after being injured during the first half of an NFL football game against the Chicago Bears in Chicago, Sunday, Sept. 20, 2020. (AP Photo/Nam Y. Huh)

EAST RUTHERFORD, N.J. (AP) — The New York Giants are not going to have a quick turnaround under new coach Joe Judge.

The 0-2 start was compounded Monday with the news star running back Saquon Barkley will miss the rest of the season with a major injury to his right knee.

The Giants might have had a shot in 2020 had they built early momentum, but losses to the Steelers and Bears is not the road to the playoffs.

There are positive signs. Despite his turnovers, quarterback Daniel Jones is playing well in his second season. The defense is better than last year and special teams might be one of the best in the league. The team also showed heart by rallying from a 17-0 second-half deficit to having a shot at a win on the final play of a 17-13 loss to Chicago on Sunday.

Still, it's not the start needed for a franchise that won nine games in the past three seasons and made the playoffs once since 2012.

Judge said the videotapes of the first two games show the mistakes the Giants are making, and the progress being made in some areas.

“One thing we have to keep in mind is the NFL is a league of extremes,” Judge said. “Week by week, someone is the best team in the league and someone is the worst. We just have to stay on our course of having daily improvement, which leads to weekly improvement which hopefully make us a better team by the end of the season. That's our goal.”

Wide receiver Golden Tate said the comeback gives the team hope, even if it came up 10 yards short.

“I think one thing I did learn about our team is that we will fight,” Tate said. “We will fight until it says zero on the clock. That’s no doubt. When you look at that and what we did in the second half, that’s pretty impressive offensively and defensively and special teams. We hold onto that.”

Pat Graham's defense has been making progress, especially in the second half. New York held the Bears scoreless in the final two quarters, forced two turnovers and limited Chicago to 112 yards. For the season, the unit has given up 10 points in the final two halves. The Bears had only two plays for more than 20 yards overall.

The mistakes have to stop. The offensive line is missing blocks. The defense is allowing opponents to run late. The linebackers and secondary have holes in their zone coverages. Add in the turnovers and a few drops and it leaves New York winless.

Cornerback James Bradberry is validating the three-year, $45 million contract the Giants gave him in the offseason. Trailing 17-0, he led the second-half comeback, tipping a pass Julian Love intercepted, and intercepting another. The turnovers led to two field goals. He also defended four passes.

On the other side, second-year cornerback Corey Ballentine saw much of his playing time taken in the second half takan by Isaac Yiadom. Ballentine allowed Bears rookie Darnell Mooney to get position on him for a 15-yard TD catch just before halftime. Ben Roethlisberger of the Steelers targeted him in the opener.

Besides Barkley, wide receiver Sterling Shepard left the game with a toe injury. Judge had no update on Shepard or any other players who might have been hurt.

4 — The number of times Jones has turned over the ball in the first two games. It has led to 12 points (two field goals, a touchdown and missed PAT). He had 24 turnovers last year and was supposed to cut down. This is not the right direction.

The Giants might be catching the 49ers at the right time. San Francisco quarterback Jimmy Garapollo (ankle), halfback Raheem Mostert and defensive linemen Nick Bosa and Solomon Thomas (all knees) were hurt Sunday in a win over the Jets. They complained about the field after the game. Now they have to play at MetLife Stadium again.