Giants have a shot to spoil Philadelphia Eagles' playoff bid 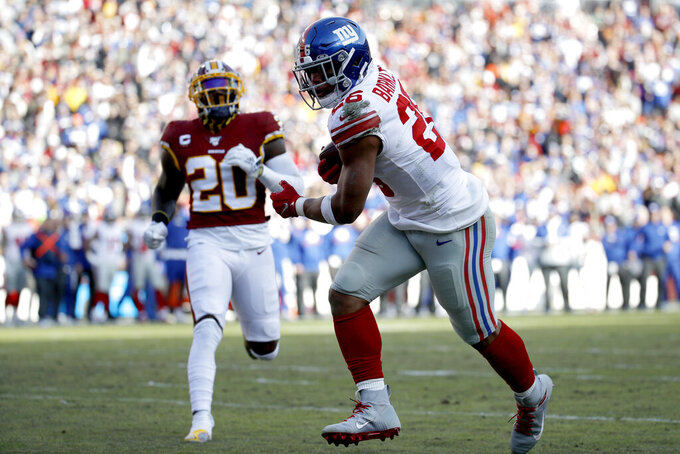 EAST RUTHERFORD, N.J. (AP) — Despite a season marked by injuries to key players and inconsistency, the Philadelphia Eagles have a shot at not only making the playoffs, but getting a home game.

That's the NFC East this season, and the Eagles (8-7) can wrap it up by beating the New York Giants (4-11) on Sunday at MetLife Stadium.

Philadelphia is riding a season-high three-game winning streak coming into the regular-season finale. Beating the Giants has been the norm lately. Doug Pederson's team has won six straight times and 10 of 11 against New York.

“Things didn’t look too good for us obviously just a few weeks ago, but our guys have battled, put ourselves in this position," Pederson said. “For us, it’s just a matter of trying to go 1-0 like everybody does in these games. We’ve got to have a good week of preparation, and if we do the things that we’re capable of doing and take care of the football and all that, then hopefully we can become the champs.''

The problem for the Eagles is the division has been unpredictable.

Just ask the Dallas Cowboys. They led it most of the season, were coming off an impressive win over the Rams and had beaten the Eagles earlier in the schedule. With a clinching on the line in Philadelphia last weekend, they laid an egg in a 17-9 loss. A win would have wrapped up the division.

Now it's the Eagles' turn.

The problem is the Giants have played well lately, winning their last two, albeit against weaklings Miami and Washington. New York also build leads of 19-3 and 17-3, respectively, in their last two games with Philadelphia, only to see the Eagles rally. The 23-17 overtime loss in Philadelphia stung big time.

“We want to play spoiler," veteran safety Antoine Bethea said. “We are not going to the playoffs so we definitely want to get this W and knock them out. We don't want anyone celebrating on our field.”

After struggling with an ankle injury most of the season, Giants running back Saquon Barkley is back. The No. 2 overall pick in the 2018 draft has two straight 100-yard games, including a career-best 189 yards rushing last week. He finished with a franchise-record 279 yards from scrimmage.

The Eagles have the No. 3 ranked run defense (88 yards average). They limited Barkley 66 yards on 17 carries on Dec. 9. Last season, Barkley ran for 100 yards in each of the two games against them and had touchdown runs of 50 and 51 yards.

Rasul Douglas is expected to start for Ronald Darby, who was placed on injured reserve with a hip injury. Darby will miss his 21st game in three seasons with the Eagles. He was beaten by Darius Slayton on a pair with of touchdowns on Dec. 9.

Douglas gets the nod over Sidney Jones, and Avonte Maddox remains in the nickel spot.

“He’s the one that had the most reps and time there,” Pederson said. “We know Sidney has filled in well; obviously Avonte Maddox is another one that we could possibly work in that rotation. ”

The Eagles are going to see something new: Rookie Daniel Jones is starting at quarterback for New York. Eli Manning had been the Giants' only starter against them since the teams' second meeting of the 2004 season. Jones missed the 23-17 overtime loss earlier this month with a sprained ankle, so Manning played.

Jones is coming off his best game. He completed 28 of 42 throws for 352 yards, five touchdowns and no interceptions in the 41-35 win over the Redskins.

Jordan Howard appears ready to return from a shoulder injury that has forced him to miss the last six games. Howard was Philadelphia’s leading rusher before getting hurt. He has 525 yards rushing, a 4.4 average per carry and six TDs. Rookie Miles Sanders has emerged during Howard’s absence and should continue to get a bulk of the workload with former practice squad player Boston Scott.

“Miles has made a tremendous impact certainty over the last month, six weeks,” offensive coordinator Mike Groh said. “Boston has done a great job and taken advantage of his opportunity. Whenever it is that Jordan is deemed ready to come back, we know we will be able to work him back in.We feel good about all those guys, so we are prepared to use whoever is available. ”

This very likely will be Manning's final game for the Giants. The two-time Super Bowl MVP is finishing his 16th season with the team and his contract is expiring. With Jones now starting, it is unlikely the 38-year-old will be given a new deal. Manning has not discussed his future plans. So how will the home crowd react to the man who was the face of the franchise since 2004?