Griffin one of the anchors in Seahawks' remodeled secondary 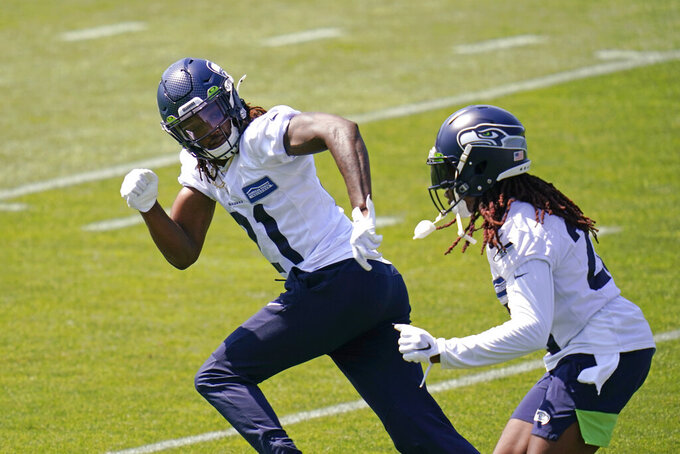 RENTON, Wash. (AP) — When Shaquill Griffin arrived in Seattle, he was supposed to be part of the new era in an effort by the Seahawks to build the next generation of their standout secondary.

Now entering his fourth season, Griffin is the only piece of that group from 2017 that’s a starter. But after a rocky first few seasons, the Seahawks may have finally found the right formula to create the next phase of Seattle’s secondary.

“I’m just enjoying the process. It’s different," he said. "The last three years, it’s been a little roller coaster, but, man, when you get that feeling, it’s like, ‘This really could be it.’ So it’s a good feeling to have, and I can honestly say I have that right now. So we’ll see how it goes. I’m excited about it.”

Griffin will begin the season as part of an overhauled secondary and the longest-tenured Seattle player among the group. It’s a unit that could be among the best in the NFL after the additions of Jamal Adams and Quinton Dunbar, to go with last year’s acquisition of Quandre Diggs.

It has been expected that Griffin would be part of a standout secondary since his arrival in 2017. He was supposed to be an anchor for the next generation after the group led by Richard Sherman, Earl Thomas and Kam Chancellor helped lead Seattle to consecutive NFC championships and a Super Bowl title.

Griffin was very good as a rookie in 2017 and looked to be an anchor in the next generation of Seattle’s secondary. He regressed in 2018, but used that disappointing season to change his mentality, change his offseason workouts, change his overall approach.

The changes Griffin made were obviously beneficial as last season he was selected to the Pro Bowl for the first time in his career. He finished the year as the No. 13 rated cornerback in the league, according to Pro Football Focus.

“Last year, I came in with more confidence,” Griffin said. “I enjoyed actually being out there and the main thing was before that I was getting too concerned about stats and knowing where I was going to be or what I wanted to accomplish instead of being more focused on how to help the team win.”

That improvement last season frames the decision Seattle will have to make at some point as to Griffin’s future with his rookie contract expiring after this season. The trades to acquire Dunbar and Adams have Seahawks fans believing this could be the next version of the Legion of Boom.

But that also means there are some expensive decisions on the horizon. Dunbar’s contract also expires after the 2020 season. Adams is up after 2021, but Seattle didn’t surrender two first-round picks to the Jets without the intention of trying to lock up Adams long term. One benefit for Seattle is Diggs is under contract through 2022. The task of keeping it all together will be a salary cap puzzle.

Griffin is trying his best not to get wrapped up in the uncertainty of what could happen after this season. For now, he’s clear in wanting to stay with Seattle and seeing how this group can develop over the next couple of seasons.

“I never want to get to a point where I played ball (and) it came to the money, so I didn’t want to keep that focus on that,” Griffin said. “The main thing is trying to find ways to win and it’s going to play itself out. The main thing is that the coaches, the organization they know I love it here. I feel like that’s very noticeable. I would love to be here, you know, as long as I can, if not forever.”

NOTES: Dunbar took part in his first practice Sunday after being removed from the commissioner’s exempt list and clearing COVID-19 intake testing. Dunbar was limited to individual drills and coach Pete Carroll had said they would ease the new cornerback into training camp.