Jason Peters back at left tackle for the Eagles 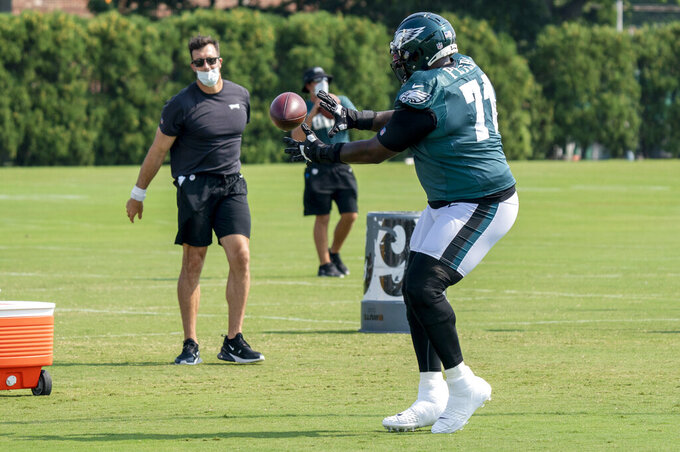 PHILADELPHIA (AP) — Jason Peters is back at left tackle for the Philadelphia Eagles.

But Eagles coach Doug Pederson said Peters walked into his office Monday morning and told him he’d be willing to move back. Pederson declined to discuss Peters’ contract but made it seem that Peters made the decision without getting an increase on his one-year, $3.1 million deal.

“This is the unselfishness, this is who he is,” Pederson said. “He sacrifices not only his body but for the football team. ... I was thrilled to death when he shared the news. I couldn’t have been happier. It shows a sign of great leadership by him. I had not expected this. It’s one of those pleasant surprises that we all hoped would come true."

The Eagles announced in the spring they weren't bring Peters back after 11 seasons in Philadelphia. But the team re-signed Peters after three-time Pro Bowl right guard Brandon Brooks tore his Achilles tendon in June.

Second-year pro Andre Dillard, a first-round pick in 2019, was slated to replace Peters at left tackle but he suffered a season-ending biceps injury two weeks ago.

“This move really solidifies the left side for us and puts us in a better position moving forward,” Pederson said.

Matt Pryor, a sixth-round pick in 2018, was practicing at left tackle after Dillard went down. Pederson said Pryor, Nate Herbig and rookie fourth-round pick Jack Driscoll are in the mix to start at right guard when the Eagles open the season at Washington on Sunday.

Quarterback Carson Wentz is pleased to see Peters back at his old spot.

“I’m excited about it for him and for this team,” Wentz said. "I’ve had JP blocking my blindside pretty much every year. He’s been the guy out there, done a great job. We call him ‘The Bodyguard’ for a reason, always takes care of me. I’m pretty excited he’s back there, the O-line is excited and it puts us in a good position going forward for sure.”