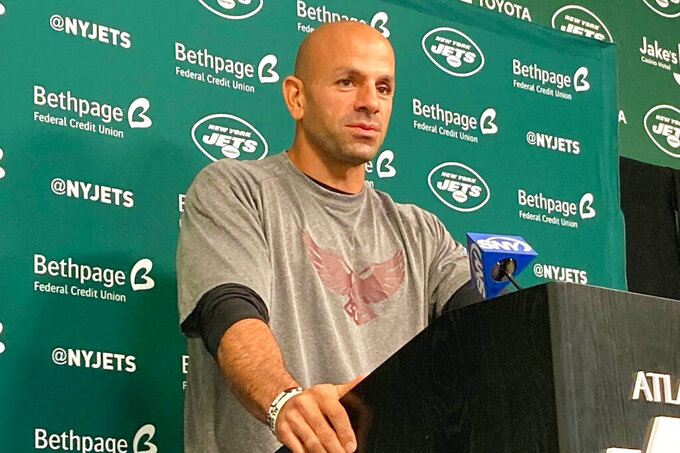 FLORHAM PARK, N.J. (AP) — Joe Armental pulled up to Dwight Morrow High School's campus the morning after Hurricane Ida flooded the Northeast and was stunned at the massive damage.

The school in Englewood, New Jersey, and the surrounding neighborhoods were hit hard by the storm on Sept. 1 that left record-breaking rainfalls, a path of destruction and dozens of deaths from the Gulf Coast to the Northeast.

“Our stadium complex was a lake,” said Armental, the school's athletic director. "It actually ruined the first floor of one of the elementary schools neighboring our sports complex. Our tennis courts imploded, our turf field was rolled up like a cheap rug, our track was destroyed.

"I mean, there was just debris everywhere, boulders and rocks just from the sheer force of the water."

And for the Dwight Morrow football team about to begin its season, it meant the possibility of not being able to play. Over 2 1/2 feet of flood water and mud filled the school's field house and the team lost most of its equipment.

So Armental took to social media and displayed pictures of the remnants of the school's sports complex, including Winton White Stadium — where Vince Lombardi once roamed the sidelines for St. Cecilia High School.

Armental also began reaching out for help. Fort Lee High School, the opening opponent for the Maroon Raiders, lent them some old road jerseys just so the game could still be played on Sept. 10. Dwight Morrow High School — the alma mater of former Jets running back/kick returner Bruce Harper — was able to find some suitable helmets.

Armental also connected with Eli Hodges, the New York Jets' manager of community relations and youth football — and suddenly there was hope. The Jets agreed to cover all the expenses to replace the school's helmets, pads and uniforms for the varsity program's 26 players.

“I'm very proud of Mr. Armental and I think this is a wonderful relationship,” Dwight Morrow High School principal Ben Suro said. “He came through and so did the Jets.”

Jets coach Robert Saleh wore a gray T-shirt with the school's logo — a maroon bird in the center — during his news conference Friday.

“They lost their entire field turf to Hurricane Ida,” said Saleh, who will support a different high school team each Friday during the season by wearing their T-shirt. “So, we wanted to represent them and do some good things for that high school.”

The Jets also invited the entire Dwight Morrow High School football team to attend their season opener at MetLife Stadium on Sunday against the New England Patriots — the day after the Maroon Raiders face Pascack Hills.

“As a lifelong Jets fan that has gone through the 1-15 season and the Rich Kotite era, and the highs and lows of the Rex Ryan era, it was just something totally surreal for me,” Armental said. “And to see a world-class organization like the Jets to not only reach out in support, but then to back it up to support the young men and everything they've done was such a boost.”

Armental called an emergency meeting Friday with the football team and showed the players the Jets' news conference in the school auditorium.

“There's been a lot of down and somber times,” Armental said. “But just as a pick-me-up, getting ready for the game (Saturday), we put it up on the big screen to make the announcement and the kids were like, ‘Hey, wait a minute. I have that shirt!’ So it was really, really cool to see that. They were all like, ‘I’m a Jets fan this Sunday!'"

Dwight Morrow High School will play all of its football games on the road or at neutral sites this season as the cleanup continues. Meanwhile, the school will work through insurance and FEMA to reconstruct its facilities including the football field, which it hopes to be done by next fall.

“The loss for the community was the toughest pill to swallow,” Armental said. “But while I’m sad it happened, I’m excited for for the future. And, you know, we’re going to build it back. We’re going to be bigger and better and have great things to come.”