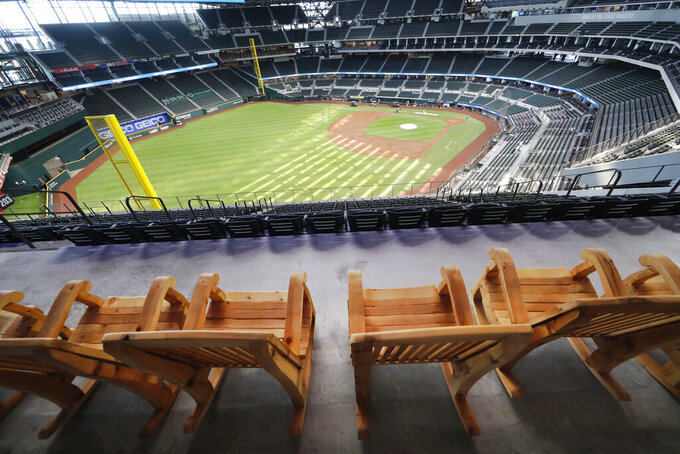 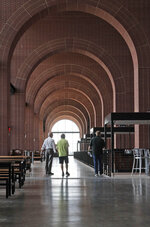 ARLINGTON, Texas (AP) — There is a series of high brick arches along an outfield concourse reminiscent of their old stadium and asymmetrical outfield walls in the new home of the Texas Rangers. Still, Globe Life Field is no retro ballpark.

When fans are finally able to go there for games, they just have to look above, and look around, to see that — after walking through the big shaded porch-like entrances to get inside.

Those 223 transparent panels in the retractable roof and the walls of windows allow in plenty of natural light. The split seating levels, both in the lower and upper decks, offer full views of the field from wide concourses.

“Our stated goal from the very beginning was to do the first next-generation ballpark,” said Bryan Trubey, the executive vice president for HKS who oversees the sports practice for the Dallas-headquartered architecture company that designed the $1.2 billion facility. “We did not want to do a retro ballpark. That’s been done, with some incremental changes over time.”

Old ballparks don’t have massive videoboards towering high over right field, like the one in Globe Life Field that is about 40 feet inside the field of play and surely a potential target for a long Joey Gallo home run, though his first one didn't hit it.

“It's a very beautiful ballpark," Gallo said before becoming the first player to homer in the new place when he pulled a deep drive down the right-field line. “I assumed it would be a pitcher's park. ... You can tell center field and the gaps are going to play really, really deep."

Then there are those field-level luxury suites and clubs, behind home plate and then extending down both lines past the dugouts.

Those suites are similar to the field-level seating at neighboring HKS-designed AT&T Stadium, a new concept when the home of the NFL’s Dallas Cowboys opened in 2009. That stadium has its own huge videoboard hovering over a 60-yard stretch of the field.

“The goal here was to do something that really defined, like AT&T did for the NFL (stadiums), and so a big part of that is the fan-facing environment,” said Trubey, who was once told by a colleague that the Cowboys field suites were never going to work.

HKS also designed Miller Park in Milwaukee, and was the architect for the NFL home stadiums of the Indianapolis Colts and Minnesota Vikings, and the soon-to-open new Los Angeles stadium where the Rams and Chargers will play.

When the Vikings stadium opened in 2016, the roof of the colossal venue was the first by HKS to be covered solely by transparent material known as ETFE, the same that is incorporated into the largest single-panel retractable roof in the world that is above the Rangers’ field. The new stadium in Los Angeles will have open sides and a fixed ETFE roof.

At Globe Life Field, the roof provides relief from the Texas heat, such as when the Rangers finally opened their pandemic-delayed season with their first game last Friday night, nearly four months after they had expected to play their inaugural season opener there. It was 94 degrees outside at first pitch, but a pleasant 72 in the ballpark.

While having a roof was a big reason for the Rangers to move across the street after 26 seasons, Trubey said the goal wasn’t for the new ballpark to just be about the roof, but rather the architecture and transparency of the building.

Limestone, brick and steel were prominently used in the construction, with those materials coming from Texas and providing a true feeling of the Lone Star State, along with those entries resembling large-scale porches and a smooth transition from outside to inside, even when the roof is closed.

“Intentionally designed to look like this ballpark could only be in Texas,” Trubey said.

When fans walk in, they will be able to see all the way into the field and all the way across to the other corner of the ballpark — about a quarter-mile away. There is a feeling of openness even when the roof is closed and all of the seats, about 40,300 of them, are closer in relation to the field than the old stadium.

“Transparency, that’s the one gift you get inherently with the old ballparks,” Trubey said. “As much as we did not want to be a retro ballpark, there were things we wanted to emulate from the original old ballparks. They were very open.”

There is also a porch high above left field, an area with oversized rocking chairs that has a spectacular view of the field — and the entire ballpark.

While no fans have been able to watch a game from there, some players have. A day after winning the season opener, Lance Lynn was joined by fellow starters Corey Kluber, Kyle Gibson and Jordan Lyles as they enjoyed a couple of innings from that perch.