Seahawks extremely thin at running back as 49ers approach 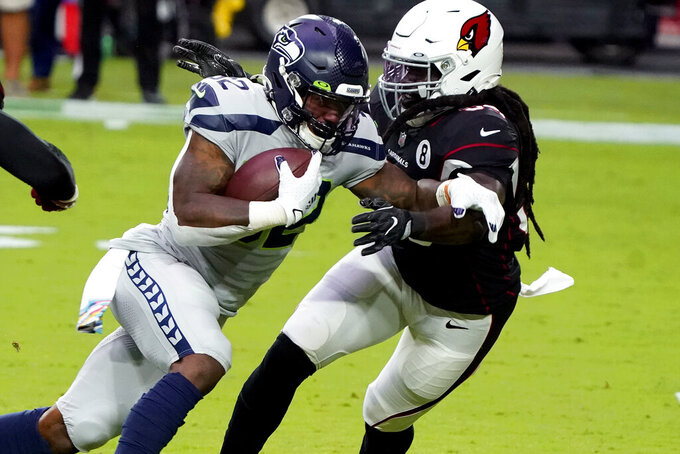 RENTON, Wash. (AP) — The Seattle Seahawks started this week with only one healthy running back and little certainty that any of their three injured options will be able to play Sunday against San Francisco.

Chris Carson, Carlos Hyde and Travis Homer are all dealing with injuries coming out of last Sunday’s 37-34 overtime loss to Arizona. Carson has a sprained foot, while Hyde (hamstring) and Homer (bruised knee) have more minor ailments.

Still, that leaves only rookie Deejay Dallas as the lone running back not limited by injury ahead of Sunday’s matchup with the 49ers. Dallas was a full participant in practice but was also listed with an arm injury.

“They’re all in their own situation and they’re different entirely,” Seattle coach Pete Carroll said on Wednesday. “We’ll have to wait and see all through the week.”

Carroll said the team wouldn’t know more on Carson until later in the week. He said Homer was moving better Wednesday than the day before, and that Hyde’s hamstring wasn’t considered a major injury but would need to be watched.

All three did not participate in practice on Wednesday.

Seattle’s other major injury question is at cornerback, where starter Shaquill Griffin is in the concussion protocol after being injured against Arizona. Tre Flowers stepped in after Griffin was injured and would likely get the start if Griffin is not cleared.

The Seahawks thought they were getting some good news with the return of Jamal Adams after he missed the past three games with a groin injury. When he met with the media ahead of practice, Carroll expected Adams to participate on a limited basis. But when the practice report was released later in the day, Adams was listed as a non-participant due to his groin injury and illness.

Adams hasn’t practiced or played since getting hurt late in Week 3 against Dallas. There was hope he would return last week after Seattle’s bye, but was held out an additional week.

“We’re going one day at a time, and we’re mixing him in the preparation with the thoughts there’s a chance, but we’re going to just have to wait and see how he does,” Carroll said.

Also returning to practice was defensive end Rasheem Green, who has been sidelined since Week 1 with a neck stinger.