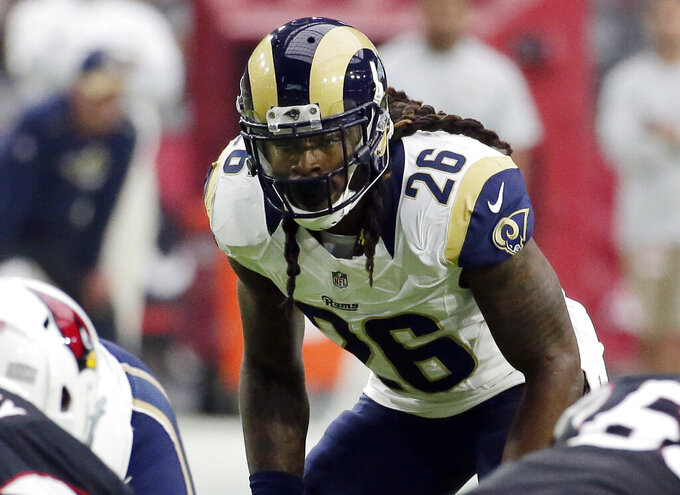 FILE - In this Oct. 2, 2016, file photo, Los Angeles Rams outside linebacker Mark Barron (26) looms over the line of scrimmage during an NFL football game against the Arizona Cardinals in Glendale, Ariz. The Pittsburgh Steelers signed Barron to a two-year deal on Tuesday, March 19, 2019. (AP Photo/Rick Scuteri, File)

The Pittsburgh Steelers signed Barron to a two-year deal on Tuesday and tasked him with filling the void left by Shazier. The Pro Bowl linebacker's career is on hiatus while he recovers from a spinal injury suffered in a win over Cincinnati in December 2017.

The 29-year-old Barron comes to Pittsburgh from the Los Angeles Rams. Barron spent four-plus seasons with the Rams, starting 66 games while developing a reputation as a sure tackler despite being a bit undersized for the position at 6-foot-2 and 230 pounds.

The Rams released Barron earlier this month before Barron began the fourth season of a five-year, $45 million deal. Barron admitted getting cut came as a bit of a surprise but added "I do know the business of football."

The Steelers are hoping Barron can create a role for himself alongside veteran Vince Williams. Jon Bostic finished with 2½ sacks in 14 games in 2018 but saw his playing time decrease late in the year. L.J. Fort, who took over for Bostic, signed with Philadelphia last week.

Barron, who entered the NFL as a safety when the Tampa Bay Buccaneers selected him with the seventh overall pick of the 2012 draft, believes he is the kind of linebacker who doesn't have to leave the field based on the situation.

Barron made the transition to linebacker in 2015 when Alec Ogletree went down with an injury. He called it a blessing and believes his background as a safety helped him thrive, despite giving away 70-plus pounds to opposing offensive linemen.

"If a guy is going to be a smaller linebacker, he has to be tough, has to be physical, has to be strong and has to be smart and realize you're undersized so you have to do some things differently," Barron said.