3 QBs to make Denver debut in Hall of Fame Game 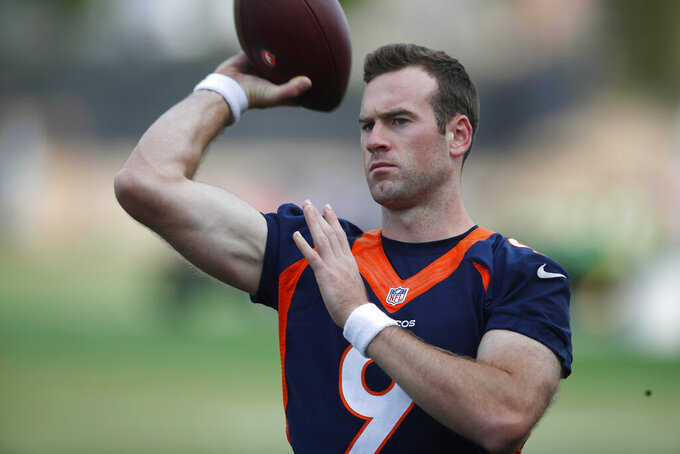 ENGLEWOOD, Colo. (AP) — None of the Broncos' four quarterbacks have ever taken a snap for them in a game. Three of them will make their Denver debut Thursday night against the Atlanta Falcons in Canton, Ohio.

Joe Flacco , acquired in a trade with Baltimore last winter, will sit out the Hall of Fame Game that kicks off the NFL exhibition slate along with most of the Broncos' other starters.

Rookies Drew Lock and Brett Rypien will get some work against Atlanta behind fourth-year pro Kevin Hogan, the incumbent backup who joined the Broncos last September off waivers.

"Whoa! I'm not used to this," Hogan exclaimed when he stepped in front of the media pack Tuesday.

A heady QB whose 36 wins at Stanford broke Andrew Luck's school record, Hogan has made just one start in his three-year pro career, for Cleveland in 2017.

Hogan, who didn't take a single snap behind Case Keenum last season, said he was eager for his first start for the Broncos this preseason.

"I feel like I've put a lot of good work in the offseason and camp, grown within the offense, within this system, taken the coaching points," Hogan said. "So, I just want to go out and prove that I can execute the offense, be an efficient quarterback and score some points."

Hogan realizes his audition isn't necessarily for the Broncos , who see Flacco as the unchallenged starter in 2019 and Lock, a second-round pick from Missouri, as the franchise's future.

"Yeah, I'm realistic. Everyone's self-aware. But at the same time you've got to control what you can control and I'm just worried about me," Hogan said. "I believe if I can push myself to my potential and keep getting better, then there will be a place for me, whether it's here" or elsewhere.

"I'd love to be here. I love our room. I love our coaching staff and love being a Bronco," Hogan said. "So, I'm going to go out and make the most of this opportunity."

Flacco and Lock are unquestionably the ones that the Broncos' brass and their fans are eager to see play this summer. Lock gets that chance first while Flacco will have to wait until Aug. 8 against Seattle.

"Of course when I go out there, I'm going to be a little fired up to show people what I can do and definitely bring the juice that I brought through college," Lock said.

Unlike in years past, there's no open quarterback competition at training camp, except to see who will back up Flacco, and Hogan said he understands the hype surrounding Lock.

"He's very talented and eager to get better," Hogan said. "A great guy to have in the room and you know the talent's there, and it's just about getting reps and experience and he's going to be around for a long time."

First, Lock has to adjust to the pro game after taking precious few snaps under center in college, where he relied on his athleticism — he grew up playing basketball, too — ad-libbing when plays broke down or his primary read was covered.

The coaches aren't expecting Lock to make the jump all at once.

"It's a journey," offensive coordinator Rich Scangarello said. "In the end, it takes time to mature as a quarterback in the NFL. There are no shortcuts."

"I think you'll still see the same me. I'm confident in what I can do," Lock said. "Whether I go in at the beginning of the game or go in at the end of the game, I'm going to be the same guy and prove to people that one day I should be starting these games."

Notes: Coach Vic Fangio snuffed out speculation that LT Garett Bolles' starting job was in jeopardy with Elijah Wilkinson playing so well. "Well, right now Garett's the starter. He's the incumbent and somebody's got to knock him out, kind of like a heavyweight championship," Fangio said. "And so far he's had a great camp. So, if we were to play today against Oakland (in the season opener), he'd be the starter hands-down. Unanimous decision."