After solid opener, Bengals look to keep going against Bears 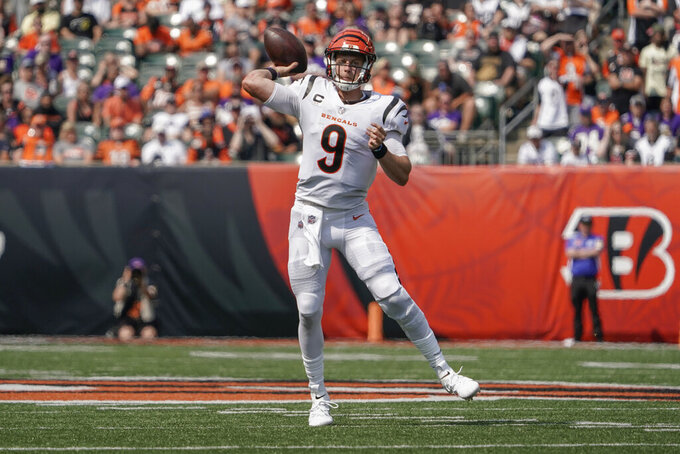 Cincinnati Bengals quarterback Joe Burrow (9) passes against the Minnesota Vikings during the second half of an NFL football game, Sunday, Sept. 12, 2021, in Cincinnati. (AP Photo/Jeff Dean)

LAKE FOREST, Ill. (AP) — With quarterback Joe Burrow healed, the Cincinnati Bengals came into the season believing they were in position to improve on a dismal 2020.

They're off to a good start. The Chicago Bears can't say the same.

Burrow and the Bengals will try to build on a season-opening win while the Bears hope to bounce back from a loss when the two teams meet at Soldier Field on Sunday.

“We’re excited for another opportunity to go out there and prove to the world what we’re about,” Cincinnati safety Jessie Bates III said. “Not just being good on Week 1, we’ve got to be good throughout the whole season.”

The Bengals beat Minnesota 27-24 in overtime last week, a promising opener for a team that finished last in the AFC North at 4-11-1.

Burrow threw for 261 yards and two touchdowns. The 2019 Heisman Trophy winner and No. 1 draft pick in 2020 completed 20 of 27 passes while setting career highs in passer rating (128.8) and yards per attempt (9.67). Not a bad opener for a quarterback who suffered a major injury to his left knee in Week 11 last year.

As for the Bears?

A 34-14 thumping by the Rams in Los Angeles was not a good start. Andy Dalton did little in his Chicago debut to silence the calls for Justin Fields, and the defense couldn't contain Matthew Stafford.

Dalton got intercepted on the game's opening drive. He threw for 206 yards, but did not have a completion for more than 19 yards against a defense that led the league in 2020.

“We weren’t able to take very many chances downfield," Dalton said. "I think if you look back it’s something that we wish we could have done a little bit more in that game. I think we understand that, we understand how we want to play.”

Now, Dalton goes against his former team for the second time.

The three-time Pro Bowler led Dallas to a win at Cincinnati last season after spending his first nine years with the Bengals. They released him after drafting Burrow.

Fields impressed in a brief debut.

Drafted 11th overall, he was in on only five plays. But the former Ohio State star made the most of them. He completed both of his passes for 10 yards and scored from the 3 on his lone run.

“He was very composed,” receiver Allen Robinson said. “But again, he’s kind of been like that.”

The Bears insist their defense remains a strength. The Monsters of the Midway didn't show it last week.

They got shredded by Stafford, who threw for 321 yards, three touchdowns and a 156.1 rating and was sacked just once. Safeties Eddie Jackson and Tashaun Gipson committed a big gaffe on Van Jefferson's 67-yard touchdown reception, failing to put a hand on the receiver when he hit the ground near the 15 after hauling in the long pass. Instead, Jefferson got up and ran to the end zone. Chicago also gave up a 56-yard touchdown pass to a wide-open Cooper Kupp.

The Bengals kept the offense on the field on fourth down three times last week against Minnesota and converted two of them. The big one came in overtime when Burrow checked out of a called quarterback sneak on fourth-and-inches from the Cincinnati 48 and completed a 32-yard pass to tight end C.J. Uzomah to set up the game-winning field goal.

Coach Zac Taylor said that’s expected to happen a lot more, especially since he trusts Burrow completely and has more confidence in his defense this season.

“If we want to do great things here, we’ve got to go get them,” he said.

That's in addition to losing second-round draft pick Teven Jenkins prior to the season. He suffered a back injury that required surgery, leading to the Bears signing the 39-year-old Peters — a two-time All-Pro — in mid-August.

The Bears went with Elijah Wilkinson after Peters and Borom left the opener.

After missing most of last year with a foot injury, Bengals running back Joe Mixon opened his fifth season by rushing 29 times for 127 yards and a touchdown against the Vikings.

“It was fun to watch,” Taylor said. "And it’s just a great weapon to have. There (were) a lot of well-blocked plays. It’s good to get him back, his energy. He’s playing with a lot of confidence right now.”

Bears running back David Montgomery is off to good start following a strong finish last season.