After Super Bowl run, Bengals say they're built to last 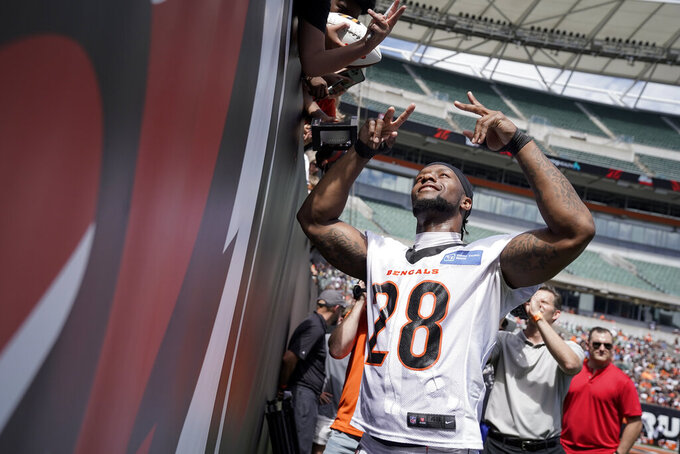 CINCINNATI (AP) — The Cincinnati Bengals are determined to show they're not a Super Bowl one-hit wonder.

The Bengals say they want to prove the team's culture has undergone a monumental shift under coach Zac Taylor and winning is the new standard in a city that was starved for sports success.

That's not hard to sell as long as the Bengals quarterback is Joe Burrow, who in his second year led the team on a nail-biting Super Bowl run that hardly anybody saw coming.

If Burrow can stay reasonably healthy — basically, if a retooled offensive line can keep the franchise quarterback off the turf — the Bengals have to like their chances in 2022.

Burrow was the most-sacked quarterback in the league, but Cincinnati won the AFC North with a 10-7 record before edging the Raiders 26-19 in the wild-card round. In the divisional round, rookie Evan McPherson kicked his fourth field goal of the game, a 52-yarder as time expired, to give the Bengals a 19-16 win over Tennessee.

The AFC championship game was even more of a thriller: McPherson's 31-yard kick in overtime was the difference as the Bengals beat the Chiefs.

Cincinnati lost to the Los Angeles Rams 23-20 in the Super Bowl as Burrow went down seven more times to make it an even 70 sacks for the season.

Taylor, who was 6-25-1 through his first two years, believes Cincinnati is not only ready to make another Super Bowl run but is built to last.

“It’s not worry, it’s excitement,” he said. "You know you want to see how quickly some guys come along, and there’s a lot of unknowns with how this team is going to look, even though we have a lot of pieces coming back. There’s new pieces that are going to be integral to what we do."

This time last year, Burrow was still rehabbing after major knee surgery. This year he needed an appendectomy and missed the first three weeks of training camp.

He's back in action at practice while still working to get his weight and strength back. He and Taylor aren't worried about the preseason. The rest of training camp will be devoted to getting him ready. Every practice of camp is planned around getting the quarterback ready to go for the regular-season opener against AFC North rival Pittsburgh on Sept. 11.

“Feeling good. Feeling better every day, working on getting my strength back, my weight back, all that good stuff,” Burrow said last week.

Safety Jessie Bates III will play with the franchise tag this season after failed efforts to reach a long-term deal with the team. After missing most of training camp, he reported Tuesday and signed the one-year tender.

Before camp, owner Mike Brown acknowledged that part of the issue with re-signing Bates is that the Bengals are looking ahead to the huge contracts that will be required to keep Burrow and receivers Ja'Marr Chase and Tee Higgins when their rookie contracts expire in the next couple of years.

Jonah Williams, Cincinnati's top draft pick in 2019, has come into his own at left tackle, and 2021 second-round pick Jackson Carman is competing with Cordell Volson to start at left guard. The Bengals have high hopes for Volson, a fourth-round draft pick from perennial FCS power North Dakota State. Collins called Volson “one of the best rookies I’ve been around.”

BUILDING FOR THE FUTURE

With Bates' future uncertain, Cincinnati drafted Michigan safety Dax Hill and Nebraska cornerback Cam Taylor-Britt. Both are versatile enough to play either position in the secondary.

Taylor-Britt suffered a setback with a core muscle injury that required surgery last week. He will miss the rest of training camp at least. The Bengals had expected the rookie to compete with Eli Apple for a job at starting cornerback. ___