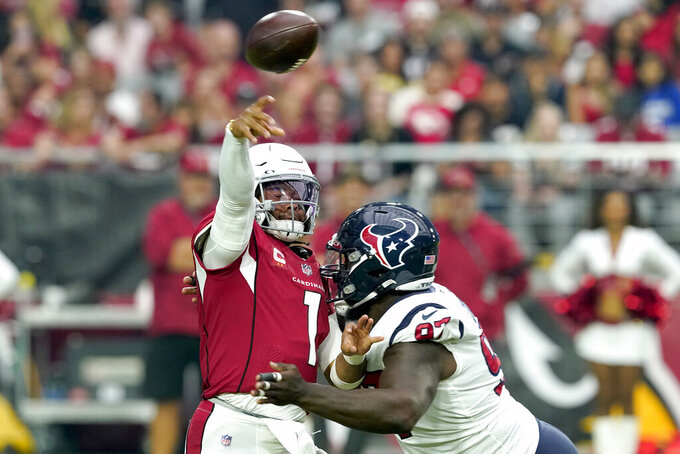 In a most unpredictable of NFL seasons, with only the Detroit Lions showing true consistency — and not quite what you seek — pinpointing the best performances at the halfway mark is a particularly difficult task.

For example, who is the front-runner for Coach of the Year with the likes of Kliff Kingsbury, Mike Vrabel, Matt LaFleur, Sean Payton and John Harbaugh performing so well?

Here's what some members of the voting panel think:

This seems to be by invitation to quarterbacks only.

“It’s a tossup right now,” says Charean Williams of Pro Football Talk. “Kyler Murray’s chances actually might have decreased with the Cardinals’ victory over the 49ers as they won easily without him and with Colt McCoy, who is a career backup. Matthew Stafford, Lamar Jackson, Dak Prescott, Tom Brady. Take your pick. No one is running away with the award, and I’d say no one is in the lead. The only reason I give it to Murray now is because his team has the best record.”

Adds Rick Gosselin of the Talk of Fame Network: “There are three teams with 7-2 records at the midway point and Murray has beaten two of them. Who would have thought back in August that Arizona would be the first team to eight wins?”

John Czarnecki of Fox Sports leans toward the “old man” of the QB collection.

“Has to be Tom Brady based on his 25 touchdowns and production overall,” Czarnecki says.

None of the voters canvassed felt a non-quarterback was among the frontrunners.

COACH OF THE YEAR

This is wide open, as well. Bob Glauber of Newsday favors Arizona's Kingsbury.

“How big a risk did Cardinals owner Michael Bidwill and GM Steve Keim take in hiring Kingsbury? Well, the guy had a sub-.500 record in college and his ‘Air Raid’ offense was thought to be unworkable in the NFL,” Glauber says. “Well, how’d that work out? The Cardinals have the best record in football, and Kingsbury’s cutting-edge offense is the envy of the NFL.”

For Jim Miller of SiriusXM, Kingsbury is in the mix and two others are pushing him.

“I'm looking at (Green Bay's) LaFleur, Kingsbury, and keeping my eye on Sean Payton,” Miller says. “It will be interesting how Sean navigates the quarterback issue moving forward without Jameis Winston, but the Saints have the defense.”

“Vrabel had a very impressive win vs. the Rams,” he says, “and they're consistent all season despite some weird losses and now dealing without Henry.”

“A devastating ankle injury ended his season – and the Cowboys’ chances – in 2020,” Glauber notes, “but Prescott has returned to play some of the best football of his career and help make Dallas legitimate Super Bowl contenders.”

This is usually Aaron Donald territory: He has won three of the last four and nobody has won the award four times.

While Donald will never be out of consideration, he appears to be chasing others the way he chases down the ball for the Rams.

“What makes Garrett’s season exceptional is his consistency,” Reyes explains. “He’s not the NFL sack leader because of a few productive games against subpar offensive lines; he has posted at least a half-sack in all but one game. And he constantly faces double (and triple) teams while doing it.”

“He's always a presence out there, and he's a leader of the Steelers' defense,” says CBS' Pat Kirwan.

“With seven interceptions through eight games, Diggs is on pace to break the NFL single-season record that’s stood for 70 years,” Gosselin says.

Receivers rarely have taken this prize, though New Orleans' Michael Thomas won it in 2019.

The clear frontrunner halfway through the schedule is Rams wideout Cooper Kupp.

“Derrick Henry was going to run away with this award before his injury,” Williams says. “Kupp is having a special year, though.”

Notes Reyes: “The stats tell you everything, but the tape is where Kupp shines. He recognizes opposing coverages and finds space, his footwork and breaks are precise, his body control lets him operate in tight windows. He’s the most dangerous receiver in football right now.”

“In a terrific rookie class of receivers, Chase has emerged as the most impactful player early on,” Glauber says. “The Bengals wisely added Joe Burrow’s former LSU teammate to an offense that needs as many playmakers as possible.”

Miller and Kirwan throw a non-receiver into the conversation with Pittsburgh running back Najee Harris.

“He is exactly what the Dallas defense needed,” Williams offers. “Dan Quinn is using him brilliantly, and he’s a big reason the Cowboys have gone from allowing the most points in franchise history last season to a solid unit.”

Kirwan has something of an outsider as his halfway suggestion: Giants LB Azeez Ojulari.

“Look at his numbers and you see the impact he's had,” Kirwan says. “The Giants' defense has not played all that well, but's he's been great.”