Angels slugger Trout is 'Mike from Millville' in homecoming 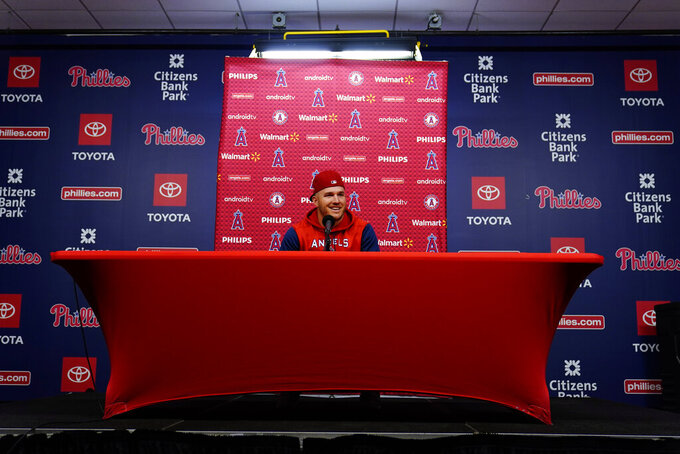 The draft? Loved it, and even bragged that Eagles general manager Howie Roseman “made a splash” with his recent acquisitions.

“I think everybody wanted to see him get a receiver,” Mike said.

Angels outfield Mike Trout is an Eagles season-ticket holder. He already has game balls in his collection and counts former Philadelphia quarterback Carson Wentz and tight end Zach Ertz among his friends.

The South Jersey native shares the same high hopes for his favorite football team as the callers who jam talk radio airwaves around Philly.

Trout, or “Mike from Millville,” was spot-on about the Eagles and the draft. They acquired 2020 Pro Bowl wide receiver A.J. Brown and raised expectations coming off a playoff appearance.

Hey, maybe Brown can hand off the ball from a touchdown to that three-time AL MVP in the green hoodie on game days at Lincoln Financial Field this season.

“I mean, every Eagles fans' expectations are the Super Bowl for sure,” Trout said.

Trout made his anticipated homecoming Friday night when the Los Angeles Angels opened a three-game set in Philadelphia, just over 40 miles from the slugger’s hometown. He spent the night in Millville, took his 2-year-old son fishing earlier Friday, “got my hair cut and came here.”

And, he ran into a traffic jam on his way to Citizens Bank Park.

He couldn’t find any deep drives as the Angels dropped their ninth straight in a 10-0 loss against the Phillies. Trout went 0 for 4, one night after being drilled on the left arm by a pitch in a loss to the MLB-leading New York Yankees.

Trout lost track of the number of friends, family and other fans who requested tickets for the weekend games in his first series in Philadelphia in eight years. Los Angeles’ scheduled 2020 return was scrapped because of the pandemic.

Trout said before the game he wanted to “enjoy tonight, see some familiar faces.” He signed autographs before the game for swarms of fans and received a warm ovation for each at-bat. A former mayor of Millville even rented a suite for Saturday's game.

Around MLB, Trout is one of the faces of the sport. Back home, well, he’s just another familiar face.

“You go back to Jersey and it’s just Mike from Millville,” Trout said. “I don’t think I try to change things much. I still do things with my friends.”

Traffic or not, Trout knows the way to the South Philly sports complex. He was a junior in high school when he tailgated with friends and partied in the parking lot during the Game 5 clincher in 2008, when the Phillies won the World Series.

His career took off not long after he starred at Millville Senior High School.

“He’s just a normal human being that happens to be really good at baseball,” Angels manager Joe Maddon said. “We talk about a lot of different things. He likes to golf. We talk about golf a lot. You’ve got to get beyond baseball. That’ll just absolutely fry your brain if you stay in one arena all the time. He’s able to step away from that, especially with his place in the game and how he’s viewed and the kind of commentary that surrounds him.”