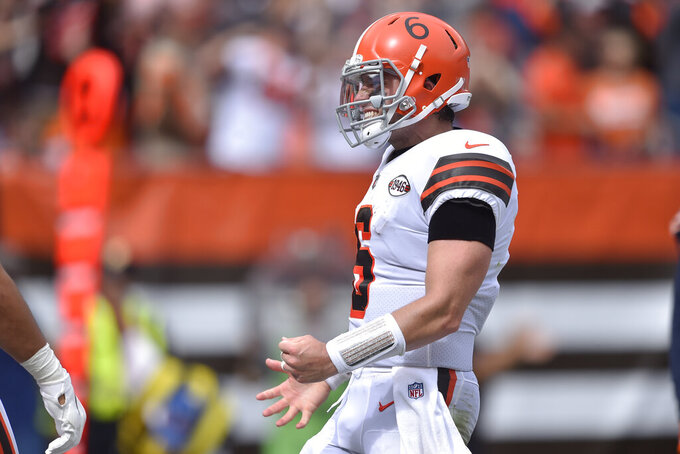 BEREA, Ohio (AP) — For now, Baker Mayfield's going to play through the pain — and maybe some painful-looking passes.

Cleveland's quarterback has a partially torn labrum in his left, non-throwing shoulder that does not require surgery at this time, a person familiar with the injury told The Associated Press on Thursday.

Mayfield, who had his shoulder pop out while he attempted to make a tackle last month against Houston, will continue to play as long as the injury doesn't worsen, said the person who spoke on condition of anonymity because of the sensitivity of the situation.

It's possible Mayfield can make it through the season and then undergo a procedure to fix the tear. But nothing is guaranteed and Mayfield's injury will make him even more of a target, starting Sunday against star defensive end Joey Bosa and the Los Angeles Chargers.

The Browns have veteran Case Keenum as a backup to Mayfield should they need him.

Mayfield and the Browns (3-1) had been downplaying his injury. But an awful performance — 15 of 33 with several head-scratching incompletions — at Minnesota last week led to speculation that's he's more seriously injured.

On Wednesday, Mayfield acknowledged he's wearing a shoulder harness and his comment that “it shouldn't” be impacting his throws essentially confirmed that the injury is altering how he plays.

“Obviously, it bothers him,” said Van Pelt, a quarterback for nine seasons in the NFL and who had labrum tears in both shoulders. "It's sore, I'm sure. His sleep is probably something that is tough, sleeping on his left side, but that's part of the deal.

"That's part of playing in the NFL. A lot of guys this time of the year and throughout the course of the year get nicked up and play through it.”

Mayfield didn't use the shoulder as an excuse against the Vikings, and Van Pelt wouldn't either.

“The game — he said it first in the press conference — it was not up to his standards, and that happens in the NFL,” he said. “You do not roll out of bed and have a great day every day. I have seen some great quarterbacks have a rough day. That is part of the deal in this business. I expect him to bounce back this week.”

His shoulder issue comes as the Browns are considering signing the 26-year-old to a long-term contract. They exercised his $18.8 million fifth-year option for 2022 in April, but have not begun talks with his agents on an extension.

Mayfield's statistics may not look good at season's end as a result of his injury.

His injury happened when he tried to make an ill-advised tackle on Texans safety Justin Reid after throwing an interception on Sept. 19. Mayfield led the NFL in completion rate after two games (81.6%), but has dropped to 65.5% and against the Vikings he missed wide-open receivers, twice to Odell Beckham Jr. on possible touchdowns.

Mayfield has not missed a game snap or practice since getting hurt, so by league rules the Browns only were required to put him on their injury list for the first week.

Beckham, who has played two games since coming back from knee surgery, isn't surprised that Mayfield is toughing it out.

“You would expect that from him,” said Beckham. “He’s not going to sit there and complain about it and do all these other things. He’s just going to go out there and play.”

Beckham said he suffered a similar injury at LSU. His shoulder popped out in a recent game, so he knows what Mayfield's dealing with.

“I tell you, that (stuff) hurts, so he’s tough,” Beckham said. ”It doesn’t feel good. There’s days where I woke up that first day after Monday I couldn’t certainly lift the arm. We’re gonna go play football.

“Toughness,” Walker said. "I'm not going to do my T.O. (Terrell Owens), ‘that’s my quarterback,’ but for real, that’s how I feel. Him sucking it up every day for us, as a quarterback, can take a hit every play or has to throw the ball in so much pain, everything like that.

“I’m over here complaining about a little nick and bruise over here, but to see him out there every day, no complaints, nothing, just comes out to work every day. When you have a quarterback like that, a leader like that, it makes you want to play a little harder.”