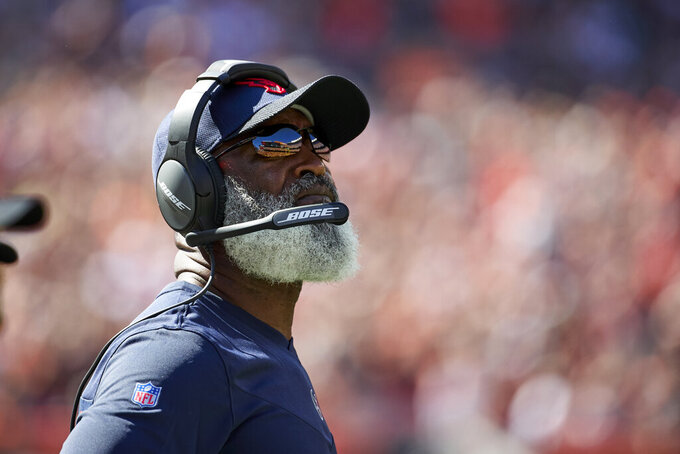 FILE - Houston Texans associate head coach/defensive coordinator Lovie Smith looks on from the sideline during an NFL football game against the Cleveland Browns in Cleveland, Sept. 19, 2021. The Texans are in talks with Smith for their head coaching vacancy, a person familiar with the meetings told The Associated Press. The person spoke to the AP on the condition of anonymity because the team had not announced that Smith had interviewed for the job. (AP Photo/Rick Osentoski, File)

HOUSTON (AP) — The Houston Texans are in talks with assistant coach Lovie Smith for their head coaching vacancy, a person familiar with the meetings told The Associated Press.

The person spoke to the AP on the condition of anonymity because the team had not announced that Smith had interviewed for the job.

The 63-year-old Smith is currently the Texans' associate head coach and defensive coordinator. He joined the team last offseason after spending 2016-2020 as the coach at Illinois.

The Texans fired David Culley, who is Black, after just one season as their coach. Smith, who is also Black, coached the Chicago Bears for nine seasons and coached Tampa Bay for two seasons ending in 2015.

Houston has interviewed multiple candidates over the last few weeks, including Brian Flores, Hines Ward, Josh McCown and Joe Lombardi. Flores, who is Black, was fired despite posting winning records in the final two of his three seasons in Miami.

The Texans had been criticized by some in the media this week for even considering McCown for the position since the 42-year-old former NFL quarterback has never coached at any level aside from volunteer coaching on his son's high school team. McCown spent part of the 2020 season on Houston's practice squad before retiring following a 17-year career.

The Texans went 4-13 last season in a year where star quarterback Deshaun Watson did not play after a trade request and amid 22 lawsuits alleging sexual harassment or assault.

Smith was 17-39 at Illinois before being fired with one regular season game left in his fifth season. The Texas native began his coaching career at his alma mater as the defensive coordinator for the high school team at tiny Big Sandy, Texas. in 1980 before moving on to college coaching in 1983.