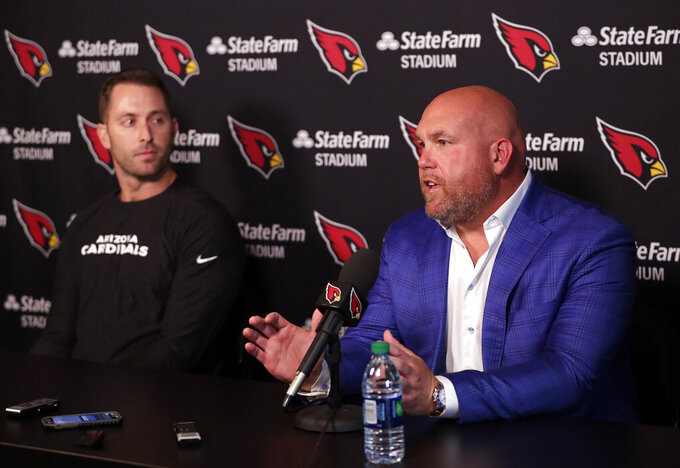 FILE - Arizona Cardinals head coach Kliff Kingsbury, left, and general manager Steve Keim discuss the upcoming NFL football draft during a news conference in Tempe, Ariz., in this Tuesday, April 16, 2019, file photo. They'll pick at No. 16 spot in the first round of the NFL Draft, April 29-May 1, 2021, and seem likely to target a defensive player, particularly a cornerback. (AP Photo/Matt York, File) 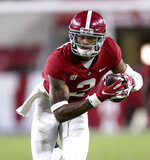 TEMPE, Ariz. (AP) — Kyler Murray's four-year rookie contract is halfway over and the 2019 No. 1 overall pick has rewarded the Arizona Cardinals with two years of high-quality quarterback play.

Frankly, he's been a bargain. That won't last much longer.

The pressure is on Cardinals GM Steve Keim and coach Kliff Kingsbury to take advantage of Murray's inexpensive contract and get the franchise back to the playoffs for the first time since 2015.

Arizona has been aggressive with trades and free agents during the offseason, adding accomplished players in their early 30s such as three-time NFL Defensive Player of the Year J.J. Watt, seven-time Pro Bowl receiver A.J. Green, and three-time Pro Bowl center Rodney Hudson.

“Kyler's rookie contract puts us in a great position for the here and the now,” Keim said in March. “But we have to continue to keep adding pieces in free agency and the draft process that are going to keep things healthy from a cap standpoint in the future.”

That's where next week's NFL draft comes into play. The Cardinals don't have many glaring holes but also have several spots that could use more depth.

They'll pick at No. 16 in the first round Thursday and seem likely to target a defensive player, particularly a cornerback. There could be several opportunities to add one depending on how the picks shake out: Alabama's Patrick Surtain II, South Carolina's Jaycee Horn and Virginia Tech's Caleb Farley.

“I do think it's a deep corner draft,” Keim said. “I mean, pick you poison, whether it's Surtain, Horn or Farley.”

While the defense seems like the biggest need, the Cardinals are always looking to add offensive talent.

Arizona lost starting running back Kenyan Drake in free agency to the Las Vegas Raiders. Backup Chase Edmonds is still with the team and the Cardinals added James Conner, who was a big part of the Pittsburgh Steelers' backfield over the past four years.

There's also room on the roster for a pass-catching tight end after Dan Arnold left for the Carolina Panthers. It's well known that Kingsbury loves receivers in his pass-heavy scheme, so it wouldn't be a shock to see the Cardinals go that route.

Keim said free agency is about filling positional needs. The draft is more about finding the best players available.

One question facing the Cardinals this offseason still exists: Is Larry Fitzgerald coming back for an 18th season?

The 11-time Pro Bowl hasn't dropped many clues about his intentions. Most of his public appearances have been courtside at Phoenix Suns NBA games. Fitzgerald is a part owner of the franchise.

“Nothing has changed on that front,” Kingsbury said. “My communication with Larry has literally consisted of golf, investments or Phoenix Suns basketball. Like we've said before, Larry's going to decide this on his time. He's one of the greatest players of all time, so he deserves to have that time.”

He's still the team's most popular player by a long shot, even if his production has slowly declined over the years. He caught 54 passes for 409 yards and a touchdown last season and is still a load to bring down in the open field at 37 years old.

Keim said Fitzgerald's eventual decision doesn't have much bearing on roster construction. But the Cardinals do have some insurance after adding the 32-year-old Green, who comes to the desert after nine seasons in Cincinnati.

Unless the Cardinals make another trade, they'll have a big gap between their second-round pick (49th overall) and fifth-round pick (160th overall)

That's because they dealt their third-and fourth-rounders in separate deals over the past 14 months. Keim says the wait from pick Nos. 49 to 160 will be a long one, but it's hard to argue with the moves that sent those picks to other teams.

The Cardinals dealt their third-round spot to Oakland in exchange for Hudson. The fourth-round pick went to Houston as part of the deal that brought receiver DeAndre Hopkins to the desert. Hopkins was one of the NFL's most productive receivers last season.

Keim also didn't rule out that the Cardinals could trade down in the order on draft day in an effort to get more picks.

The Cardinals have a new veteran at cornerback after they signed 2015 Pro Bowl selection Malcolm Butler. He's a logical replacement for longtime star Patrick Peterson, who signed with the Minnesota Vikings after 10 seasons in Arizona.

Keim said losing Peterson hurts because he'd become such a big part of the franchise. It's also a huge reason many mock drafts have the Cards selecting a cornerback in the first round.

Outside of Butler, the Cardinals still have Robert Alford and Byron Murphy Jr. on the roster. Alford hasn't played the past two seasons because of injuries.