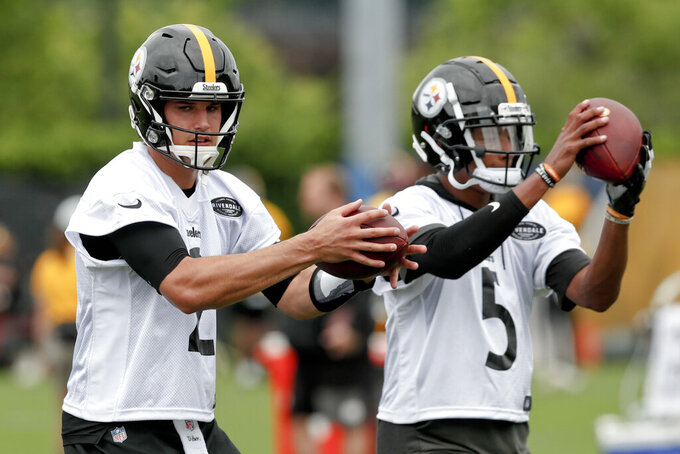 PITTSBURGH (AP) — Josh Dobbs did all the right things last summer, or at least enough of them for the Pittsburgh Steelers to cut veteran backup quarterback Landry Jones at the end of the preseason and promote Dobbs to the spot behind Ben Roethlisberger.

Nine months later, none of it matters.

Whatever gap Dobbs created over then-rookie Mason Rudolph in 2018 is gone. It's not an indictment of the ever-meticulous Dobbs so much as a return to the way the Steelers prefer to do business. When Dobbs and Rudolph report to training camp at Saint Vincent College next month with 88 of their teammates, they'll once again be in a fight for the opportunity to be the first option off the bench.

"They understand it is competition and it's open," offensive coordinator Randy Fichtner said Wednesday. "But to me, that position is always going to be open no matter who is here. That battle is every single day trying to put us in the best position when if Ben is not in the game, that we have put the right guy in to give us a chance to win the game."

Even if those chances will be focused entirely on the short term.

Roethlisberger signed a new contract in April that runs through 2021. Great news for the Steelers, not so much for the two players taken a year apart in the draft — Dobbs in the fourth round in 2017, Rudolph in the third round in 2018 — who saw any real shot at becoming an NFL starter blocked indefinitely, at least as long as they play in Pittsburgh. Dobbs' deal expires after 2020 and Roethlisberger's extension coincides with the entirety of Rudolph's rookie pact.

Not that Rudolph is particularly interested in trying to big picture things.

"I'm not talking about contracts," Rudolph said with a respectful shrug. "That's what it is. Football, you're either one play away, two plays away sometimes so you've got to be ready to go and you've got to prepare like you are the starter."

Something Rudolph looks a bit more like this spring than last. The tentativeness that nagged at him as he tried to absorb Fichtner's playbook has vanished. The former Oklahoma State star has looked far more confident with the ball in his hands and the uncertainty in his voice while barking out signals is gone. Even the guy Rudolph tongue-in-cheek referred to as "Mr. Roethlisberger" has noticed.

"They are more comfortable, especially Mason," Roethlisberger said. "The first year your head is kind of spinning a little bit. You see him settling into it a lot. And he's not afraid to step to whatever group, whatever receiver. In the past, he might have felt hesitancy to throw to certain guys."

Maybe because Rudolph understands snaps are precious. There weren't many to go around for him once the regular season started last fall save for the occasional work on Wednesdays while Roethlisberger watched from the sideline as part of a scheduled day off. Rudolph knew it was coming. That didn't make the adjustment any easier.

His goal is to not let it happen again. If there was a silver lining — at least for Rudolph — in the team's failure to reach the playoffs, it was the opportunity to do a deep dive into Fichtner's system.

"I can get kind of into a little bit of a nerd mentality at times in the offseason," Rudolph said. "It's fun. It was fun studying. Back here ready to go and put it on display."

Rudolph isn't the only one in the quarterback room that's a self-professed nerd. Until he unseated Jones last summer, Dobbs was a bit of a curiosity, as well known for his degree in aerospace engineering as his ability to throw a football. He excelled during an extended audition in the preseason — passing for 434 yards and four touchdowns — and suddenly found himself as the primary backup.

Dobbs threw meaningful passes in two games, completing a 22-yarder with the team deep it its own end against Baltimore in early November then went 4 for 9 for 24 yards and an interception on the road in Oakland after Roethlisberger exited with a rib injury.

While Dobbs feels he did enough to remain second on the depth chart, he's not exactly pouting. He's watched Rudolph's progress over the past 12 months. Dobbs knows if he doesn't continue to improve, he'll find himself falling behind or maybe even looking for work come early September.

That's why getting worked up over the potential ripple effects of Roethlisberger's contract is useless. There's so much to focus on right now, wondering what his career might look like in two years is pointless.