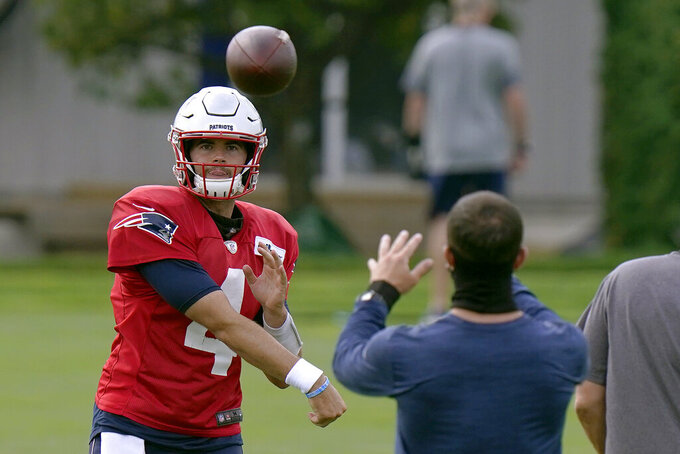 FOXBOROUGH, Mass. (AP) — The Patriots began their final week of training camp Monday, but Bill Belichick still isn’t sure when he'll be ready to announce his starting quarterback.

“I don’t know,” Belichick said when asked how close he was to revealing who would be on the field for New England’s opener against Miami on Sept. 13. “When we’re ready to do it, we’ll do it.”

Cam Newton, who has been the front-runner to get the nod since camp opened, was absent from the field Monday morning during the limited portion of practice open to reporters. It was the first time he wasn’t present at the start of a practice since training camp began.

But Newton widened the gap between himself and fellow quarterbacks Jarrett Stidham and Brian Hoyer last week during a simulated game in which he was the only quarterback to lead the projected first-team offense. Newton misfired on just three passes during the session held inside Gillette Stadium on Friday.

In an interview on SiriusXM Radio on Monday, Belichick praised Newton’s work ethic and his ability to show improvement throughout the past month.

“He’s very, very competitive on the field. He always wants to do his best and do better than the guys he’s competing against,” Belichick said. “Everybody’s competitive, but I think there’s different degrees of it. ... Based on what I’ve seen I would put him in the top echelon of that.”

Stidham and Hoyer both split reps during Friday’s simulation, reminiscent of the competition the two had during camp last season to be Tom Brady’s backup. The job eventually went to Stidham.

If they are competing for the same role at this point, it could wind up being another close call between the two.

Stidham has clearly improved since his rookie season when he beat out Hoyer. But he is coming off an injury that limited his time on the field last week. Hoyer’s value continues to be the ton of experience he has in offensive coordinator Josh McDaniels’ system.

Even without the starter being announced at this point, Hoyer said it hasn’t changed the level of competition among the quarterbacks.

Only in his second year, Stidham said he believes his capacity for growth is his biggest attribute.

NOTES: C David Andrews, LT Isaiah Wynn, RB Damien Harris, DT Beau Allen and CB Michael Jackson were also absent from the field during the portion of Monday’s workout open to the media. ... RB Lamar Miller, who began training camp on the physically unable to perform list after signing Aug. 13, practiced for the first time. An eight-year veteran with Miami and Houston, he missed last season with the Texans after sustaining a knee injury during training camp.