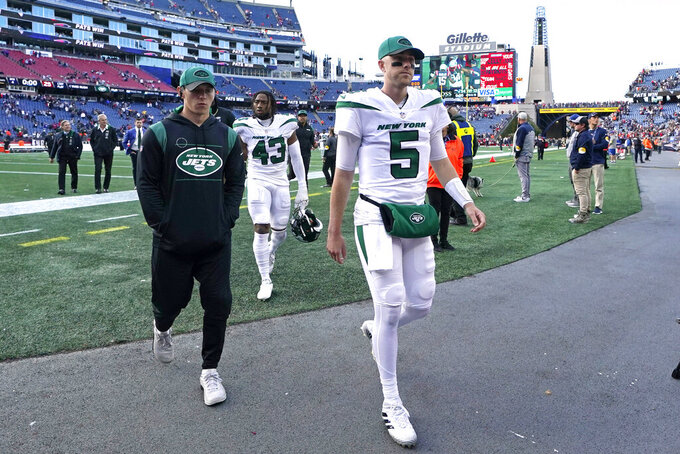 EAST RUTHERFORD, N.J. (AP) — Ja'Marr Chase is catching passes at a record pace and leaving defensive backs frustrated and embarrassed along the way.

The Cincinnati Bengals rookie wide receiver has 754 yards receiving, the most by a player through his first seven NFL games. Chase, the fifth overall pick in the NFL draft in April, has 35 catches and leads the league with six receptions of at least 40 yards.

“He’s kind of been this good from the jump,” said quarterback Joe Burrow, who won a national championship at LSU with Chase in January 2020. “He has more games in the offense and more reps accumulated. Other than that, he’s just getting better and better.”

Chase sliced through Baltimore's defense last week, catching eight passes for 201 yards and a touchdown in Cincinnati's 41-17 rout that put the Bengals (5-2) in a tie with the Ravens atop the AFC North.

Next up is the struggling Jets (1-5) who have struggled against the pass — they rank 25th — and could be in for a long day at MetLife Stadium trying to keep pace with Chase.

“Obviously, he's one of the best deep threats,” rookie cornerback Brandin Echols said. “As a team, we just want to control the big shots.”

Well, good luck with that.

Chase, selected the AFC’s offensive player of the week, is tied for second in the NFL with 13 receptions of at least 20 yards. He has turned an already solid offense into one of the most exciting in the league, teaming with wide receivers Tyler Boyd and Tee Higgins, running back Joe Mixon and tight end C.J. Uzomah to create matchup nightmares for opposing defenses.

Especially Chase, who has been a highlight play waiting to happen on nearly every pass from Burrow.

“He has this uncanny ability to get in (defensive backs') blind spot,” Burrow said. "Then, DBs will try to squeeze off the sideline — that’s what they’re taught to do — and he’s just too strong to get squeezed to the sideline. And before they know it, he’s past them. He just does so many things well that he’s hard to cover and hard to defend.”

He said his progress has been measured in how he’s better able to shift slightly in the pocket to avoid pass rushers and give himself another tick or two to get the ball off. He was sacked a total of 10 times in the first two games of the season. Last week, Baltimore sacked him just once after Detroit got him twice the previous week.

“I thought I did a really good job of when I was pressured, of making subtle movements in the pocket to stay away from sacks and continue to make plays,” Burrow said. “I’ve always prided myself on being quick in a phone booth, and that’s kind of what was missing at the beginning of the year. And now it’s six weeks more of rehab I was able to do that allowed me to be comfortable in that situation.”

Burrow, the No. 1 overall pick in 2020, injured his knee in Week 11 and had surgery last December. He expects to gain even more mobility as his knee gets stronger through the season.

Mike White will get at least one start at quarterback for the Jets with rookie Zach Wilson sidelined at least two weeks with a sprained knee ligament.

The 26-year-old White, in his third season with New York, made his NFL debut last week against New England — throwing his first pass for a touchdown. He finished 20 of 32 for 202 yards and two interceptions.

The Jets acquired veteran Joe Flacco from Philadelphia earlier in the week, but it appears it will be White's job until Wilson returns unless he struggles.

Bengals offensive linemen say they're building camaraderie and playing better together because they’ve started gathering for dinner every Thursday night.

“All the great lines I’ve been around have been that way, where they spend a lot of time with each other, they have their weekly dinners,” Taylor said. “There’s a culture within the culture there in that O-line room. I hear it firsthand because I share a wall with that room, so I hear it over the course of the week, whether I want to or not.”

The Jets remain the only team in the NFL without an interception this season, and have failed to pick off an opposing quarterback in eight games, going back to last year.

New York almost got one last week when Quincy Williams nearly came up with a pass from Mac Jones, but it went off the linebacker's fingertips.

“We’re on an unlucky streak right now,” Saleh said. “We’re going to get them. We just have to catch the ones that are thrown to us.”