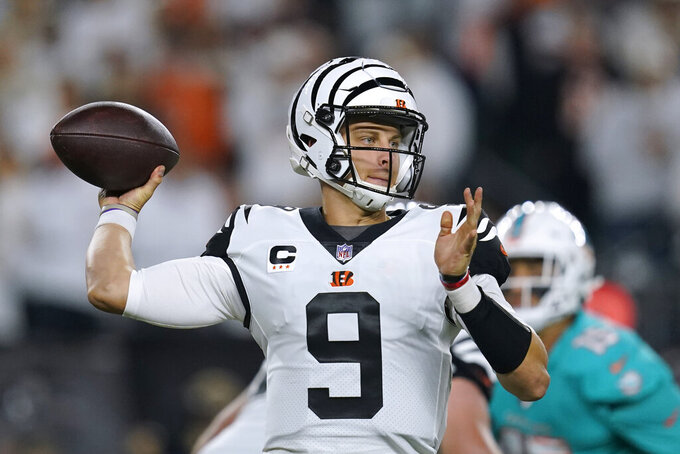 Cincinnati Bengals quarterback Joe Burrow throws a pass during the first half of the team's NFL football game against the Miami Dolphins, Thursday, Sept. 29, 2022, in Cincinnati. (AP Photo/Joshua A. Bickel)

CINCINNATI (AP) — Behind an overhauled offensive line coalescing in front of quarterback Joe Burrow and a defense forcing turnovers, the Cincinnati Bengals are looking more like the defending AFC champions.

After losing their first two games, the Bengals have reeled off two wins in a span of five days.

They beat the New York Jets on Sunday, then turned around and took down Miami 27-15 in a Thursday night game marred by the horrific sight of Dolphins quarterback Tua Tagovailoa being taken off the field on a stretcher.

Tagovailoa was taken to a hospital, but was expected to be released and fly home with the team. Coach Mike McDaniel said the QB sustained a concussion.

“All day the protection was awesome,” said Burrow, who was 20 for 31 for 287 yards and two touchdowns. “I had all the time I needed in the pocket to find the guys I needed.”

“Joe was lights out,” Bengals coach Zac Taylor said. “You had to beat man coverage. We had the guys to do it and the protection to match it and the quarterback who, that’s what he wants to see.”

Bridgewater threw an incomplete pass on Miami’s final drive to turn the ball over on downs with 57 seconds left.

Tyreek Hill paced the Dolphins with 10 catches for 160 yards. Jason Sanders kicked three field goals and had one blocked. He also missed a point-after attempt.

“You’re going to lose games to very good teams if you lose the turnover battle and you’re kicking field goals instead of trying for touchdowns," Miami coach Mike McDaniel said. "We had been executing. We didn’t today. You don’t get free passes against good teams.”

The Bengals handed Miami its first loss of the season. The Dolphins departed Cincinnati with uncertainty surrounding the future of their starting quarterback.

Tagovailoa was chased down and thrown to the turf by Cincinnati’s Josh Tupou with about six minutes left in the first half. He remained down for more than seven minutes before being taken to a hospital with reported head and neck injuries.

His teammates gathered around as they worked on him.

“Very scary moment,” McDaniel said. “He was evaluated for a concussion. He’s in the concussion protocol, but he’s being discharged. It’s an emotional moment. It’s not a part of the deal you sign up for.”

The 24-year-old Tagovailoa was suffering from a sore back and was listed as questionable for most of the week ahead of the game.

Tagovailoa briefly left Sunday’s 21-19 victory over the Buffalo Bills after appearing to be disoriented by what the team originally said was a head injury after taking a hard hit from Bills linebacker Matt Milano late in the first half. He missed just three snaps and returned after halftime.

The team and Tagovailoa said after Sunday’s game the quarterback had a back injury that caused his awkward stumble and fall after he was slammed into the turf in the second quarter. The team said Monday that Tagovailoa was not in concussion protocol. He said he “hyper-extended” his back after getting his legs caught under someone on a quarterback sneak.

At halftime, the Bengals added two players to their fledgling Ring of Honor at Paycor Stadium.

Isaac Curtis is regarded as one the team's all-time great receivers. The four-time Pro-Bowler played in Cincinnati in 1973-84 and still holds the Bengals record for average yards per reception (17.07).

Tackle Willie Anderson was considered one of the best offensive linemen of his era. Anderson played in 182 games (regular and postseason) for Cincinnati in 1996-2007 and went to the Pro Bowl four times.

Dolphins: CB Xavien Howard left in the second half after suffering a groin injury.

Bengals: TE Devin Asiasi left in the second half with an ankle injury.

Bengals: At Baltimore on Sunday, Oct. 9.