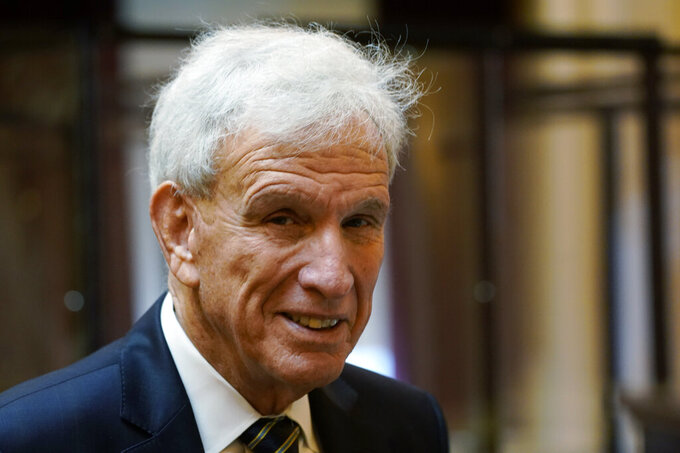 Virginia State Sen. Richard Saslaw, D-Fairfax, speaks to the rostrum staff prior to the start of the Senate session at the Capitol Tuesday Feb. 22, 2022, in Richmond, Va. Saslaw is the chief sponsor of a bill intended to lure the Washington Commanders to the state. (AP Photo/Steve Helber)

RICHMOND, Va. (AP) — Virginia lawmakers are advancing a measure intended to lure the Washington Commanders to the state by allowing the NFL team to forgo what could be $1 billion or more in future tax payments to help finance a potential new football stadium.

The move, which comes a year after lawmakers gave the team preferential treatment for a lucrative sports betting permit, is intended to help Virginia secure its first major pro sports franchise and beat out Maryland and the District of Columbia as the team weighs where to go after its FedEx Field lease ends in 2027.

“They're going to go someplace. Absent some kind of incentive, they're likely not to be here," Tray Adams, a lobbyist representing the team, told a panel considering the legislation.

The team declined to respond to questions from The Associated Press regarding its seriousness about Virginia or its site plans. But lawmakers who have been briefed on the project, including some who met with team owner Daniel Snyder at his home, have described a stadium that would be part of a broader multiuse development in Loudoun or Prince William counties in suburban Washington with a resort and conference center, residences, an amphitheater and indoor concert facility.

“It's almost a mini-city,” Senate Majority Leader Dick Saslaw, a Fairfax Democrat who is sponsoring one version of the legislation, told his colleagues.

The House and Senate passed differing versions of the measure this month with broad bipartisan support and each will now take up the other's version. Legislative leaders have said they expect the differences to be worked out by a conference committee, meaning final negotiations would happen in private.

Both versions of the legislation would create a Virginia Football Stadium Authority tasked with financing the construction of a stadium and related facilities. The nine-member authority would be allowed to issue bonds, then recapture certain tax revenues to pay down that debt.

The type and amount of taxes that can be recaptured varies between the two. The Senate version offers more help, allowing the capture of certain sales taxes generated across the entire campus, personal income tax revenues from stadium operations, corporate income tax revenues and pass-through entity tax revenues over 30 years. The House version allows only for the recapture of sales tax over 20 years and would require that the team pay at least 50% of any naming rights revenues to the authority.

Both measures say the revenues may be used for any purpose the authority "deems appropriate for the facility,” including but not limited to debt service on the bonds. The legislation does not set a hard limit on the amount of taxes that can be recaptured, nor does it allocate any money.

The bill's proponents say the project will result in a net benefit to the state despite the incentives. Saslaw has said the team estimates that, based on his version of the bill, $153 million a year would be generated in taxes, with $60 million of that going to the state's coffers, $59 million to the locality's and $34 million to debt service. About $1 billion in tax revenue could be redirected toward the project over 30 years, he has estimated, which would not be expected to cover the entire cost of the stadium.

Stadium funding initiatives in other states in recent years have drawn criticism as a drain of taxpayer resources. At each hearing his bill has received, Saslaw has argued the state is not putting any general fund money into the deal, nor will it be on the hook for the bonds.

“The state is not backing the bonds. It’s forbidden in the bill,” he said pointedly during one hearing.

Republican Sen. Steve Newman, who supports the measure, described the deal as “self-help.”

The team has been looking into new stadium possibilities for several years and seems unlikely to renew its lease at FedEx Field in Landover, Maryland, where it has played since 1997.

Now called the Commanders after the new name was unveiled earlier this month, the team has been mired in criticism since dozens of former employees revealed a toxic workplace culture. An investigation performed by an outside law firm and overseen by the NFL resulted in a $10 million fine, though no written report was issued. Members of Congress have recently pressed the league to turn over details.

Snyder has faced sexual harassment allegations by a former employee as recently as early February. Those accusations, which Snyder denies and the NFL moved quickly to investigate, have been a point of contention in debate over the Virginia bill.

Both chambers defeated similar amendments offered by Democrats that would have made the deal contingent on disclosures related to the investigations.

“When you go into business with a billionaire and you’re forgoing up to a billion dollars in tax revenue, I just think it’s appropriate to do due diligence rather than have things drip out month after month, week after week, year after year,” said Sen. Adam Ebbin, one of several lawmakers who said he met with Snyder at his home to talk about the deal.

The lack of transparency surrounding those talks has concerned some lawmakers.

Del. Elizabeth Guzman, a Democrat who represents part of Prince William County, said she was not approached by team representatives about the project. She wondered why Del. Barry Knight, the appropriations committee chairman from the coastal city of Virginia Beach, was carrying the House version of the bill and why there had not been a meeting of the entire legislative delegation that represents the counties where the stadium could be located.

Guzman also noted the region’s notoriously clogged traffic and wondered if the district’s infrastructure could handle the project.

“I would love to see what they have to offer for us. What are they they willing to do for Prince William County to improve our transportation system?” she said.

In an interview with the AP, Youngkin said he hoped he and the Legislature could reach agreement on a bill that would “best reflect the interests of Virginia taxpayers and hopefully bring the Washington Commanders to Virginia.”