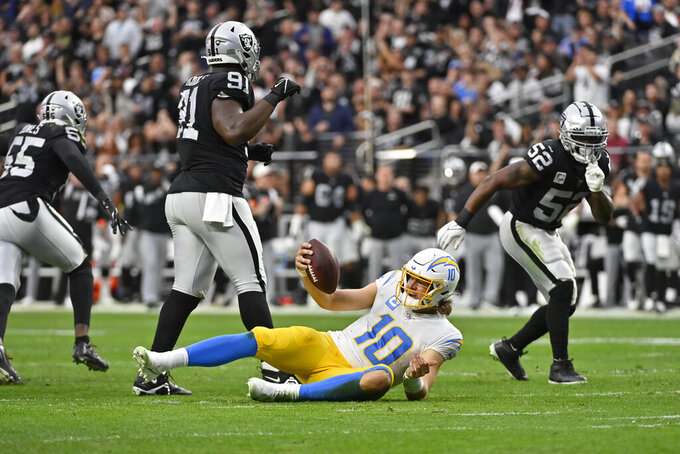 Los Angeles Chargers quarterback Justin Herbert (10) reacts after sliding short of a first down during the first half of an NFL football game against the Las Vegas Raiders, Sunday, Dec. 4, 2022, in Las Vegas. (AP Photo/David Becker)

Failing on all three, the Chargers fell 27-20 to the Raiders on Sunday, their fourth loss in six games.

“They were getting to us early on in the game,” Chargers running back Austin Ekeler said. “We were trying to mix it up, come out with some quick pass game, just take some pressure off and try to get the run game going and they did a good job containing us the first half. And then the second half came out, just didn’t end up making enough plays. Got us in a position where we had a chance, so that was nice, but they were able to hold us.”

The Chargers (6-6) opened the season 4-2 but have regressed on both sides of the ball while dealing with significant injuries. Los Angeles averaged 371.8 offensive yards per game through Week 4, but that has dipped to 340.8 in its last eight games.

On defense, Los Angeles gave up 349.5 yards per game in its first four but has allowed 382.7 per game since.

Las Vegas outgained the Chargers 404 yards to 386 on Sunday.

“I’ve just tried to focus on being a quarterback for this team, a good teammate, and doing everything that I can,” quarterback Justin Herbert said. “It’s something that we’ll address, we’ll watch the film and we’ll get better at. But it’s definitely something we could address.”

After looking relatively sharp in the first half, Los Angeles’ defense folded after halftime, allowing the Raiders to score on three straight possessions, including a pair of deep touchdown receptions by Adams, and open a 27-13 lead.

“The third quarter was where the game was decided today,” Los Angeles coach Brandon Staley said.

Leading 13-10 at halftime, the Chargers received the second-half kick only to fumble the ball away two plays later. It took one play for Derek Carr to find Adams for a 31-yard touchdown.

Then, two plays after Cameron Dicker missed a 52-yard field-goal attempt, Carr and Adams hooked up again, this time for a 45-yard TD strike.

Adams finished with eight catches for 177 yards. Jacobs rushed for 144 yards, including 83 in the second half as he wore down the Chargers and broke several tackles.

“He’s a good back and you know that that’s gonna happen,” Staley said. “I really felt like we defended well in the first half outside of a couple of passes, but in the second half, it was a little bit up and down, especially in the run game. Guys just gotta tackle better, making sure we wrap up and make sure we get more than one guy at the point of attack.”

The Chargers made it a one-possession game when Herbert found Keenan Allen for a 35-yard TD early in the fourth quarter. But LA couldn't do anything on its final possession and lost by one score for the fourth time this season and third in the past four weeks.