With Brady back, Buccaneers look to bolster depth in draft 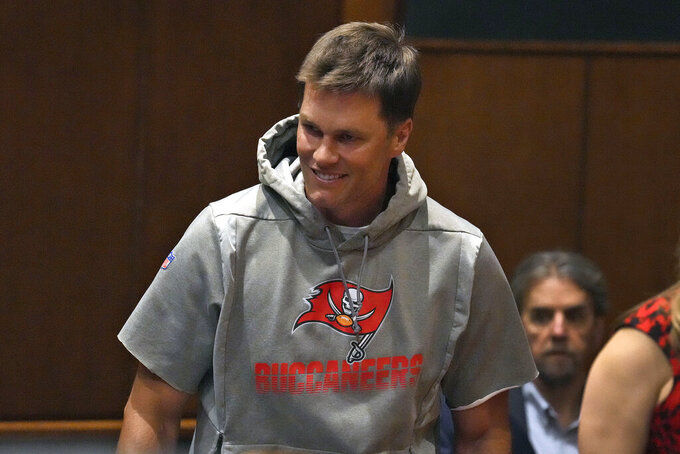 TAMPA, Fla. (AP) — Thanks to Tom Brady’s return, the Tampa Bay Buccaneers aren’t looking for any quick fixes in the NFL draft.

The seven-time Super Bowl champion’s decision to end his brief retirement not only resolved the team’s quarterback situation, but also helped general manager Jason Licht retain most of a solid core of talent around Brady.

For the second straight year, the Bucs enter the draft with expectations of bolstering depth rather than addressing pressing needs.

With Brady back for a third season in Tampa Bay, receiver Chris Godwin signed to a new three-year, $60 million deal, Pro Bowl center Ryan Jensen, running back Leonard Fournette and cornerback Carlton Davis re-signed after testing free agency, there are no glaring weaknesses on offense or defense.

In addition, Brady’s decision to unretire assisted Licht’s efforts to re-sign as many of Tampa Bay’s own free agents as possible as the Bucs try to ensure new coach Todd Bowles has everything he needs to get the Bucs back to the Super Bowl.

“It’s kind of feeling like last year where we’ve got the guys in the room to compete for another championship,” Davis said.

“I know when we come back together as a team,” the cornerback added, “everybody’s going to be full of confidence.”

Brady, who announced his return just 40 days after saying he would not be back for 2022, was also helpful in landing wide receiver Russell Gage, defensive backs Logan Ryan and Keanu Neal, and offensive lineman Fred Johnson in free agency.

A year after defying the odds of bringing back all 22 regulars from a roster that won the Super Bowl in Brady’s first season with the Bucs, there’s a good chance there will be minimal change to the starting lineup again this fall.

Licht said Brady’s decision to return undoubtedly influenced Jensen, Fournette, Davis and others to stay, while also impacting the signing of Gage and other free agents brought in to “re-load” for a shot at another championship run.

“It certainly helped. I can’t lie,” Licht said of Brady’s influence. “We’ve got the ultimate cheat code with Tom, so we’re going to take advantage of it while we have it. I think players like it here, regardless. But, having a player like that throwing the ball to them, or even being on the other side of the ball knowing that he’s your quarterback, it certainly helps.”

There’s still work to be done.

Tight end Rob Gronkowski and defensive tackle Ndamukong Suh remain unsigned for next season, and both of those positions figure to be areas of focus for the Bucs in the draft.

Barring a trade, the team will have the 27th selection in the first round.

“You have to trust your board. You can’t push players — like I said before — of a perceived need too high just because you need that position. Otherwise, they’re going to trump other really good players at different positions,” Licht said.

“We could take a player literally at just about any position on our team, and I think if they’re a great player we’re going to be happy we did it,” the GM added. “So, it’s a delicate balance of wanting to win now and also looking into our future.”

With the exception of first-round linebacker Joe Tryon-Shoyinka, who appeared in all 17 games and had four sacks as a rookie, the Bucs didn’t get a lot of production from last year’s draft class. Second-round quarterback Kyle Trask was inactive for every game.

With Jason Pierre-Paul unsigned for next season, Tryon-Shoyinka is projected to move into a full-time starting role in 2022.

Licht said it’s difficult to predict how much this year’s draft class might be able to contribute right away.

“As a general manager, my staff, we have to have our eye on the future a little bit, too. We obviously want a player that’s going to come in and impact us and have a good year and help us win a Super Bowl this year, but you just never know until you get the player in the building,” Licht said. “You can do all the work you want, you just never really know how it’s going to work out.”

Much has been made of the impact Brady has on personnel decisions, particularly in stockpiling talented veteran playmakers around the quarterback, who will turn 45 in August.

Licht said it would be a mistake to assume Brady weighs in heavily on draft preparation, though.

Bolstering the defensive line will be a priority in the draft.

Georgia DT Devonte Wyatt and Houston DE Logan Hall are among the players the Bucs brought in for visits.

“They are good players. You hear about them a lot in the media and there’s a reason why,” Licht said. “They are good football players that are a premium position. We had good visits with them. We had a lot of good players in here for the visits. They were two of them.”