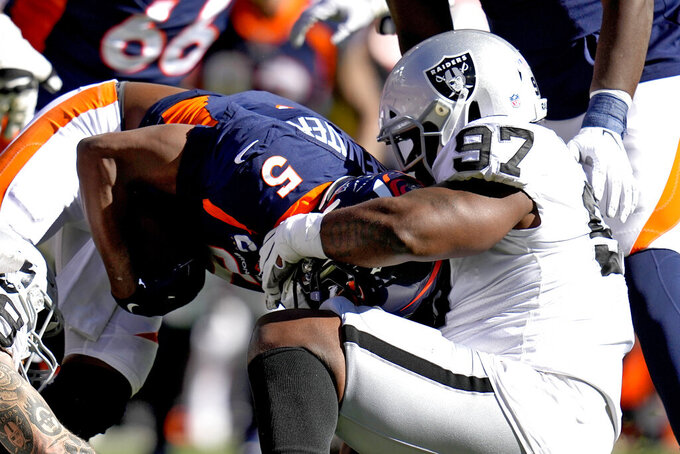 ENGLEWOOD, Colo. (AP) — Teddy Bridgewater gingerly limped out to practice Tuesday and then stumbled onto the podium afterward, still feeling the effects of the battering he endured 48 hours earlier.

What really left Bridgewater hurting, however, was right guard Graham Glasgow, who stepped on his left foot just as he delivered a late touchdown pass to Noah Fant that made Denver's deflating 34-24 loss look a little less one-sided.

The Broncos (3-3) are expecting Bridgewater to start Thursday night at Cleveland, where the Browns (3-3) are dealing with a similar rash of injuries and suspicions about their season being on the brink.

When asked if there were any questions in his mind about starting, Bridgewater didn't give a direct answer: “Honestly, we're just hitting it aggressively in the training room right now and I'm locked in on this game plan with the mindset of going out there and competing and trying to win a football game.”

Von Miller all but guaranteed Denver will halt its three-game skid, although his declaration this time wasn't quite as strong as it was in 2018 when he promised the Broncos would kick the Arizona Cardinals' booty.

“If you look at this season, in the first two games I had a couple of sacks. We won those games. These last three games, I didn’t do as much. So, if I can play well and I can get sacks and I can find a way to disrupt the game, you know, we will win,” Miller said.

“So, the pressure’s on me to play well. I will play well. I don’t know who the tackle is I’m going against, but I’m going to kill him — and the other guy, too, on the other side,” Miller added with a chuckle.

Although you couldn't tell from Miller's bravado, Fangio said his team was wobbled after losing three straight.

“When you've lost a few in a row like we have, your confidence will be shaken to a degree,” Fangio said. “But I think these guys have good self belief. I think they have good belief in their teammates and I think they're on their way to getting ready for this game the way we think we should.”

Safety Justin Simmons said that while it's difficult physically, a short week is easier mentally.

“I like the way you put it, harder on the body, easier on the mind,” Simmons said. "That's the league in general. You have good games, you have bad games and you've got to be able to wipe them both equally.

“And so Sunday's game is what it is. Look, I can't go back and fix anything. I just watch the film and grow and get better. So, the thing I'm thankful about is I don't have to wait until Sunday to play again," Simmons said. "We can play Thursday and get something new on tape and it's a new narrative.”

NOTES: Fangio said LT Garett Bolles (knee) will start against the Browns. He also said there remains a slight chance WR Jerry Jeudy (right ankle) comes off IR this week. ... ILB Justin Strnad will have the helmet radio to relay defensive play calls with Alexander Johnson out for the season with a torn chest muscle.