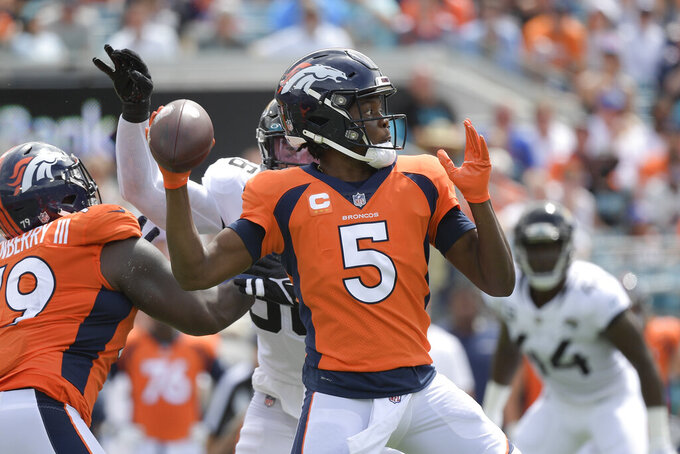 Denver Broncos quarterback Teddy Bridgewater (5) throws a pass against the Jacksonville Jaguars during the first half of an NFL football game, Sunday, Sept. 19, 2021, in Jacksonville, Fla. (AP Photo/Phelan M. Ebenhack)

OPENING LINE: Broncos by 10½, according to FanDuel SportsBook.

TURNOVER DIFFERENTIAL: Jets minus-4, Broncos plus-2.

JETS PLAYER TO WATCH: RB Michael Carter. The fourth-round pick out of North Carolina had just 6 yards rushing on four carries in the season opener, but flashed playmaking ability last week with 59 yards on 11 carries and two catches for 29 yards. Coach Robert Saleh has called him “electric” and Carter could quickly become a bigger piece of the offense.

BRONCOS PLAYER TO WATCH: Second-year ILB Justin Strnad gets his first career start with Josey Jewell (pectoral) going on IR. Strnad, who missed his rookie season with a broken wrist, filled in for Jewell last week and had five defensive stops and a special teams tackle.

KEY MATCHUP: OLB Von Miller vs. LT George Fant and RT Morgan Moses. Miller moves around, so both Fant and Moses have to be ready to keep him off QB Zach Wilson. The Jets' O-line played much better vs. New England last week, but Miller is a different dude when it comes to facing a pass rusher. Miller already has three sacks after missing last season with an ankle injury.

KEY INJURIES: Jets WR Jamison Crowder has a groin injury that has him doubtful for the game after not practicing all week. He was dealing with it entering the season, tested positive for COVID-19 and missed the opener, then missed the game against New England with the sore groin. RB Tevin Coleman was ruled out with a non-COVID-19 related illness. Broncos ILB Jewell is out for the season after tearing a chest muscle while playing special teams at Jacksonville last week.

SERIES NOTES: The Broncos have won seven of the last 10 meetings with the Jets, who last won in Denver on Oct. 24, 2010. The teams have only met once in the playoffs, when John Elway led the Broncos to a 23-10 win in the AFC championship game on his way to winning his second consecutive Super Bowl to cap his Hall of Fame playing career.

STATS AND STUFF: The Jets have lost 11 straight games in the month of September and are 0-2 for the third consecutive season following their 25-6 loss to the Patriots last week. New York’s last victory in the month was Sept. 10, 2018, at Detroit, the season opener and Sam Darnold’s NFL debut. ... The Jets are tied for the third-longest September skid in NFL history, behind only the 2007-10 Rams (13) and 1994-97 Saints (12). ... Rookie QB Wilson is coming off a four-interception game vs. New England. ... WR Corey Davis had seven catches for 101 yards against the Broncos last season while with the Titans. Crowder had seven receptions for 104 yards against Denver last year. ... DL John Franklin-Meyers had a sack and a forced fumble against the Patriots. ... The Broncos' 23-13 win at Jacksonville gave head coach Vic Fangio a 2-7 September record. ... Teddy Bridgewater is just the fourth quarterback in NFL history to open a season with two touchdown passes, no interceptions and a 75% completion rate in each of his first two games of a season. He joins Drew Brees in 2018, Aaron Rodgers in 2015 and Jeff George in 1994. ... Rookie RB Javonte Williams led Denver with 64 rushing yards in Week 2. ... WR Courtland Sutton set career highs with nine catches for 159 yards last week.

FANTASY TIP: With Jerry Jeudy out after suffering a high ankle sprain in the opener, Sutton had a career day last week, but it could be WR Tim Patrick's turn. Patrick had six catches for 113 yards and a touchdown against the Jets last season.