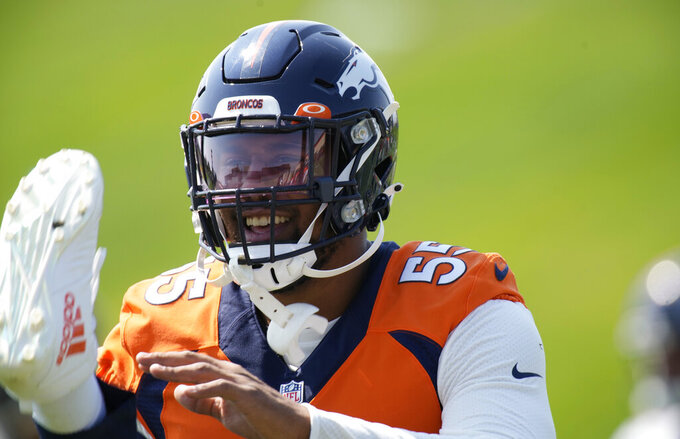 Chubb said in a video posted on the team's website Tuesday that with the Broncos (2-0) in the midst of a resurgence, he's going to work hard to get back this season.

“When this thing is healed up I expect to see a whole new Bradley Chubb, a whole new animal, a whole new dog,” Chubb said. “I feel like 2018 was my last full year healthy and I feel like when I’m done with this it’s going to be 10 times that and really excited just to see everything that comes full circle.”

Chubb left Denver's 23-13 win at Jacksonville in the first half Sunday after feeling a stabbing pain in his left ankle while trying to get to Jaguars quarterback Trevor Lawrence.

“It was during that 2-minute drive I just tried to run the corner and I felt it wasn't all the way there,” Chubb said. “I’ve been dealing with this bone spur I’ve got in my ankle and sometimes when I try to turn the corner it gets a little annoying and it feels like a stab-type pain.”

Chubb missed the opener against the New York Giants because of the injury. He and Von Miller have played 21 games together out of a possible 50 since John Elway selected him with the fifth overall pick in the 2018 draft.

Chubb came back from a torn ACL in 2019 to earn his first Pro Bowl berth last season, but he missed the final two games with a right ankle injury. In May he underwent surgery to remove bone spurs and missed most of the offseason program.

The other ankle began bothering him last month and he missed the opener.

“I did everything I could to manage it and try to come back and play," Chubb said. "I took the New York week off trying to calm it down just a little bit and then this Jacksonville week I tried to do everything to get back on the field and unfortunately all those things weren't working in my favor.

“So, the thing is now just to go in and clean it up and be right back."

Chubb's start Sunday marked his first game alongside pass rush partner Miller since Sept. 29, 2019. But he started to limp off after a play in the second quarter before going to his hands and knees and punching the ground as trainers went out to escort him to the sideline. He was replaced by Malik Reed and didn't return.

"I was frustrated on the sideline, throwing my hands down, throwing my helmet down just because I know that this team is a special team,” Chubb said.

“These past couple of years haven’t been going our way in the win column and I feel like we’re starting to change that, we’re starting to get over that hump and not being able to be there is going to be very frustrating."

“But I’m going to push everything I can to try to get back to these games and hopefully it’s sooner rather than later and my mindset is going to be just to attack it 100 percent every day,” he said.