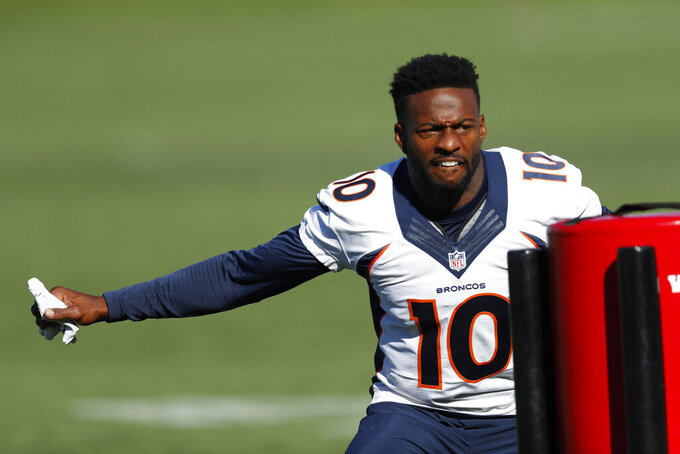 ENGLEWOOD, Colo. (AP) — A day after Broncos wide receivers Emmanuel Sanders and Courtland Sutton fought at training camp, the pair who threw punches and water bottles at each other presented a unified front, joking that their next bout will be on pay-per-view for a cool $69.99.

"Tickets go on sale tomorrow," Sanders said Tuesday as he and Sutton stood before reporters who asked what had sparked the scuffle between teammates who play the same position and even went to the same school, SMU.

Neither gave any details about what led to the tussle, but both said they had put the disagreement to rest.

"It stands good," Sanders said. "Obviously, we're family. We went to the same school, grew up in the same area. It was a miscommunication. That's just what it is. But at the end of the day, we're back on the same page, trying to be the best receivers in the world.

Sutton, a second-year pro who declared himself the No. 1 receiver this spring, concurred with Sanders, a 10-year veteran coming back from a torn Achilles tendon.

"One hundred percent," Sutton said. "I think what Emmanuel said was right on point. We're brothers at the end of the day. That's all that matters. Like he said, we went to the same school. This is a dude I look up to, a dude I've been watching for a long time, chasing his records and getting here and following in his footsteps.

"So, you know, all that stuff is swept under the rug, we're moving on to bigger and better things. We're ready to win and take what we have here and keep growing it."

Ignoring further questions, Sanders again touted their next "bout" on pay-per-view before both walked away.

"Yeah, why not? I'd watch it," Flacco said. "I might have a front-row seat, though, I don't have to pay. I get a front-row ticket.

"No, hey, like I said, it's part of this sport. It's physical. Guys' emotions are high. We've been here for a few weeks now, (taken) a bunch of reps and Emmanuel, he's a vet. He's a guy who wants to see this team go someplace and he's going to speak his mind on how it's going to happen."

Coach Vic Fangio , who said Monday that the fight would only be an issue if it festered, said he felt Sanders and Sutton had worked things out.

"Yeah, I think it's put to bed and it's a dead issue," Fangio said.

Another scuffle broke out Tuesday when defensive end DeShawn Williams got into it with guard Don Barclay before Fangio stepped in and led Williams away.

Fangio said Flacco will make a cameo against the Seahawks as will Kevin Hogan before Drew Lock, a second-round draft pick out of Missouri, gets the bulk of the workload.

Lock went 7 for 11 for 34 yards against Atlanta last week.

"One thing you've got to remember about him now, he's hardly ever been under center in his life, OK?" Fangio said. "He's hardly ever had to call a play in his life, formation and checks. And you know once he gets through that, I think the other stuff will come easier and quicker, OK?

"So, he's learning a new offense, how an offense operates, and when he becomes more of a quarterback in those regards and feels comfortable, where it becomes second nature, the other stuff will come."