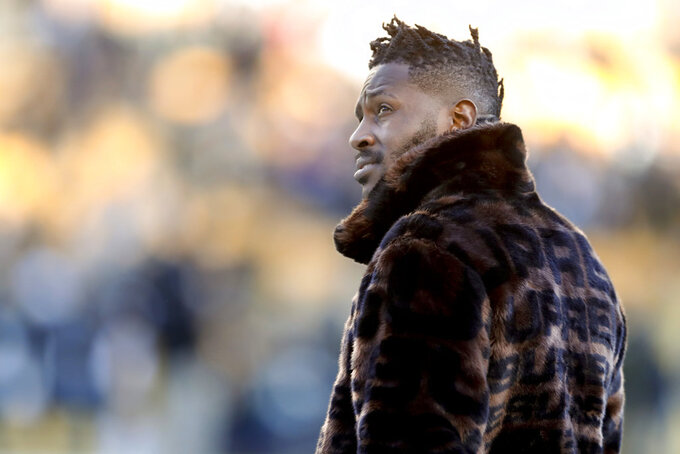 In this photo from Dec. 30, 2018, Pittsburgh Steelers wide receiver Antonio Brown stands on the sideline before an NFL football game against the Cincinnati Bengals, in Pittsburgh. Pittsburgh Steelers head coach Mike Tomlin says he's disappointed in the behavior of star wide receiver Antonio Brown but added the team has not received any formal trade request from Brown's camp. (AP Photo/Don Wright) 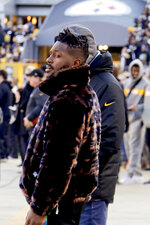 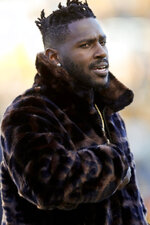 The longtime head coach is not ruling it out either.

The star wide receiver went radio silent in the days before the team's regular-season finale against Cincinnati last Sunday, in essence abandoning the club in what Tomlin described as its "darkest hour."

Though Brown did make a cameo appearance on the sideline — rocking a fur coat — as the Steelers edged the Bengals , he vanished before the final gun and did not show up on Monday for exit interviews and to clear out his locker.

Tomlin said Brown arrived at practice last Wednesday reporting discomfort in his lower body. The team gave Brown the day off, did so again on Thursday. On Friday, Tomlin sent Brown home to rest and suggested he get an MRI on the banged up knee.

Tomlin did not hear from Brown on Saturday to get an update. When Drew Rosenhaus, Brown's agent, reached out on Sunday morning to tell Tomlin that Brown was available to play, Tomlin "drew a line in the sand" and said Brown could best serve the Steelers by cheering on the sideline.

While Tomlin demurred when asked during his season-ending news conference on Wednesday if Brown "quit," the longtime head coach offered little in defense of the perennial Pro Bowler, whose historic production has become increasingly at odds with his erratic off-the-field behavior.

"The bottom line is we were playing a significant game and he didn't do a good enough job of communicating of being available in the hours leading up to that performance," Tomlin said.

"So we needed to make decisions pertinent to getting to play in that performance. So, I've been real clear at outlining what transpired, the level of communication, things of that nature. Obviously there are some things within that that you can infer, certainly."

Rather than spend time elaborating on how the Steelers went from 7-2-1 the week before Thanksgiving to 9-6-1 and missing the postseason for the first time since 2013 — a collapse Tomlin plans to "wallow" in over the next few weeks — he spent the majority of his time responding to questions about Brown.

It's nothing new. The 30-year-old is the only player in NFL history with six straight 100-catch seasons, but has become adept at drawing headlines for things that have nothing to do with football, be it livestreaming from the postgame locker room in Kansas City two years ago to threatening a reporter from ESPN on social media in September to suggesting on Twitter he should be traded .

It hasn't stopped. As Tomlin spoke, Brown — who has three years remaining on his four-year, $72 million extension he signed in the spring of 2017 — published a post on Instagram to his 3.1 million followers saying "I am divinely blessed with free will. I utilize that gift, choosing to take charge of my life." Brown also appeared with former teammate James Harrison, who promised an exclusive "interview" with Brown.

Tomlin has long had a policy of trying to tune out what his players say or do on social media, but admitted there's a level of "disappointment" when it comes to Brown's actions before adding it's immaterial to his job.

Asked if there's a point with Brown or any player where the distractions can outweigh the on-the-field benefits, Tomlin said "certainly."

Whether the Steelers are at that point is unclear. Tomlin said the team has not received any "formal" trade requests from Brown's camp.

Tomlin declined to get into what punishment Brown may face in the future, saying the club is still gathering information. Tomlin does believe that Brown was dealing with some type of injury, but added to his knowledge that Brown has not undergone the MRI.

"Like we do in all circumstances, we will deal with it appropriately and deal with it in-house," Tomlin said.

Brown's future status is just one of a number of questions the Steelers will face over the next few months, starting with the coaching staff. The defense and special teams both had critical missteps this season and offensive line coach Mike Munchak is in the mix for several open head coaching positions.

So lately, has been addressing the perpetual drama surrounding one of the NFL's most talented and mercurial players.

This story has been corrected to reflect that Brown has three years left on his contract, not two.