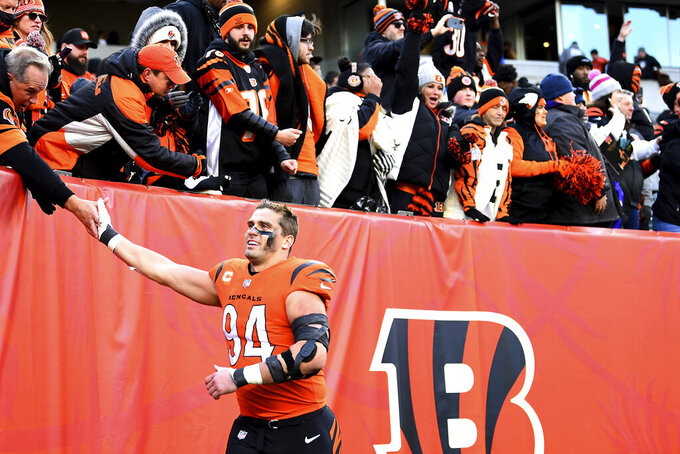 FILE - Cincinnati Bengals defensive end Sam Hubbard (94) high-fives fans after the team's NFL football game against the Pittsburgh Steelers on Nov. 28, 2021, in Cincinnati. Hubbard grew up in Cincinnati and followed the “Bungles” as they stumbled and bumbled throughout much of his youth. His first three years as a Bengals were pretty much the same. “It’s just really cool how many people have thanked me for the relief they’ve felt, the time that they had watching the games, the great memories they’ve had from these wins this year,” Hubbard said. (AP Photo/Emilee Chinn, File)

Burrow, Cincinnati's second-year quarterback, was everything the team could have hoped for — and more — in his return from a serious knee injury. He had 4,611 passing yards and 34 touchdown passes in the regular season to win the AP Comeback Player of the Year award.

And if the Bengals get more of the same on Super Bowl Sunday, they'll take home their first championship in this most unlikely of seasons.

“The leader in the huddle is just a stone-faced killer, like, ’Yeah we’re going to go score this, we’re going to get the 2-point conversion afterward, and boom, that’s it,” veteran tight end C.J. Uzomah said of his quarterback. “You’re like, ‘nice.’ Like I love hearing that. Now I’m going to go back to doing what I need to do."

Burrow did have help to get the Bengals this far. In addition to Uzomah, Chase had a big season with 81 catches for 1,455 yards and 13 touchdowns. Chase's emergence also opened up the offense for wide receivers Tee Higgins (74 catches, 1,091 yards, six TDs) and Tyler Boyd (67 catches, 828 yards, five TDs) as well as running back Joe Mixon (1,205 yards rushing, 13 TDs).

Even when the offense has stalled in the playoffs, McPherson's 12-for-12 performance on field goals kept the Bengals from having too many empty possessions. More importantly, he clinched the team's victories at Tennessee and Kansas City with winning kicks.

The Bengals' offensive line has struggled most of the season. Burrow was the most-sacked quarterback in the regular season (51) and was taken down an astounding nine times in the divisional-round win against the Titans. However, Burrow showed an ability to escape trouble against the Chiefs.

On defense, getting pressure on the quarterback is always paramount. For the Bengals to have success in slowing down the Rams they have to disrupt the timing of quarterback Matthew Stafford and dynamic receiver Cooper Kupp, the AP Offensive Player of the Year, who led the league in catches, yards and touchdowns.

That responsibility primarily falls to edge rushers Trey Hendrickson and Sam Hubbard. Hendrickson, who signed a big free agent deal last offseason, led the team with 14 sacks in the regular season, and Hubbard had key sacks of Patrick Mahomes late in the AFC title game. If defensive tackles D.J. Reader and B.J. Hill contain the running game, that should free the rest of the front seven to stop the Rams' potent attack.

Another factor for the Bengals has been their ability to grab interceptions late in their playoff wins.

Linebacker Germaine Pratt picked off Derek Carr to seal the win over the Raiders. Logan Wilson grabbed a tipped ball from Ryan Tannehill in the final minute that helped knock off the Titans. And Vonn Bell intercepted Mahomes in overtime to help clinch the AFC title, and improbably get the Bengals to the Super Bowl.

And Stafford has shown a tendency to throw interceptions. He tied for the league lead with 17, including four pick-6s. He has thrown 27 pick-6s in his career, tied for the most since 2000.

On the sideline, Zac Taylor, who was 6-25-1 in his first two seasons, has also contributed to the culture change that was needed for the franchise.

“We believed from the get-go,” Taylor said after the Bengals’ 27-24 overtime win at Kansas City in the AFC championship game. “Whether people believed in us or not, we did.”

Sixty more quality minutes (barring OT) will bring the most significant prize of them all: Super Bowl champions.