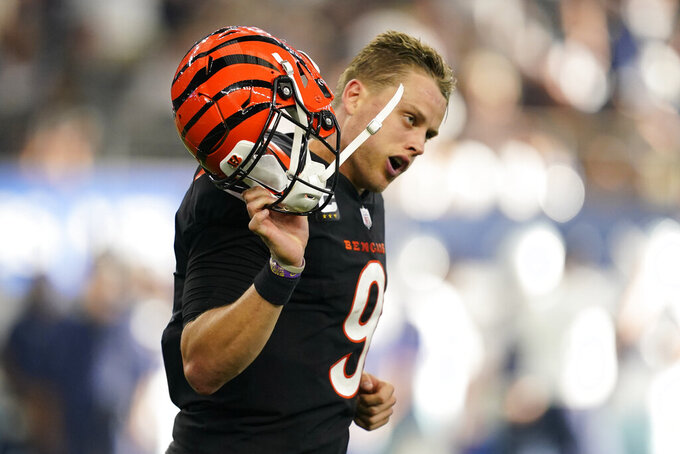 CINCINNATI (AP) — Joe Burrow's impassioned Heisman Trophy speech about poverty in his rural Ohio hometown has evolved into a foundation launched this week by the Cincinnati Bengals quarterback and his parents.

The Joe Burrow Foundation will help provide food and attention to childhood mental health issues in Ohio and Louisiana, where he played college football.

Burrow said the timing was right to launch the effort after the Super Bowl run by the Bengals brought high-profile attention to the quarterback and his efforts on behalf of the food bank in Athens County, where he grew up. The southeastern Ohio county is one of the poorest in the state.

Burrow's mention of hunger and poverty in that community in his December 2019 Heisman Trophy acceptance speech inspired donations of hundreds of thousands of dollars to the local food bank as well as giving to hunger charities in Baton Rouge, Louisiana.

Burrow explained Wednesday how it came about.

“You don’t know anything when you’re growing up,” he said. “You’re just there, and you notice things, but you really don’t understand. And then when you look back on some experiences that happened that maybe you brushed off when you were little, you realize that those people just didn’t have a lot so they were doing what they could to get by. That realization I had really toward the end of my college career.”

Burrow said his mother, Robin, spearheaded the project. She's seen the situation firsthand as the principal of an elementary school in neighboring Meigs County.

The initial food drive was expanded to include getting mental-health resources for poor children in need.

“During the pandemic, I think mental health was what everybody was talking about because there was a lot of social isolation, not a lot of social activities going on," Joe Burrow said. "That’s very hard for people who are developing, people in middle school, people in elementary school, high school.”

The effort may expand even more.

Burrow grew up in the area while his father, Jimmy Burrow, was defensive coordinator under Frank Solich at Ohio University in Athens. Joe started his college career at Ohio State before transferring to LSU, where he led the Tigers to a national championship in 2019. He was the top overall draft pick by the Bengals in 2020.

“His character matches his on-field talents,” Cincinnati coach Zac Taylor said Wednesday. “When he's had opportunities to bring up topics in front of people who are influential, he's done it. It's not just a public perception, it's what he does behind the scene as well.”

Notes: The Bengals on Wednesday cleared DE Khalid Kareem (hamstring) and CB Cam Taylor-Britt (core muscle injury) to return to practice. Both went on the injured list on Sept. 1.