Campbell tries to shield defense after 48-45 loss to Seattle 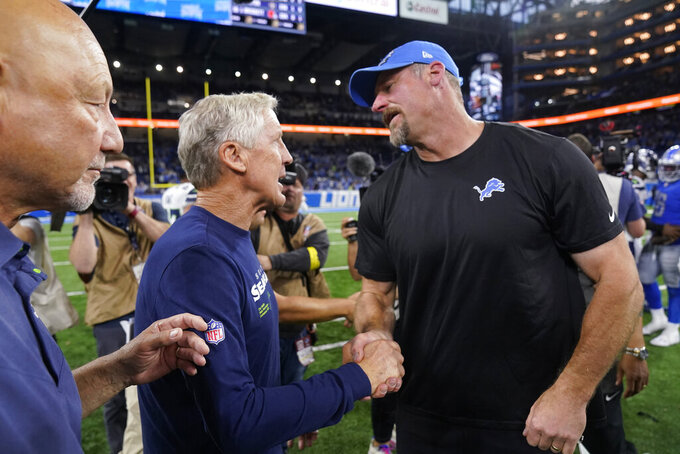 “We turned the ball over twice, and one of them went for seven points. That’s the difference in the game,” he said.

Well that, and a porous defense.

Jared Goff passed for 378 yards and four touchdowns, but Detroit struggled against Geno Smith and the Seattle Seahawks in a wild 48-45 loss on Sunday. Smith accounted for 369 yards and three touchdowns, and Rashaad Penny rushed for 151 yards and two TDs.

Seattle never used its punter. The Seahawks scored on seven drives, missed a field goal on the eighth and took a knee to end the game on the ninth. They also scored on Tariq Woolen's 40-yard interception return in the second half.

“Defensively, we just weren't good,” Campbell said. “We obviously have to clean up everything, and I'm going to look at that with (defensive coordinator Aaron Glenn). We will look at the scheme and the personnel, and we'll find the best fit. Not just to get a chance to win our next game, but to win three or four games down the road. If that means playing more young guys, that's what we'll do.”

Campbell said Glenn and his staff will be helping with the review of the defense, but that their own performances will be part of it.

“If your offense scores 45 points, I think you have to win the game,” Lions rookie defensive end Aidan Hutchison said. “Props to the offense for putting up those points, but that was a poor defensive performance. We have to be better than that.”

Lions linebacker Alex Anzalone doesn't think it is a talent issue holding the defense back.

“This is the NFL and everyone is good enough to make plays in this league,” he said. “We know a guy like DK Metcalf is going to make plays. It's the mental errors and undisciplined football that gets you into trouble. That's kind of where we are as a defense right now, and we all need to fill our part of the puzzle.”

Metcalf had taken a perceived shot at Lions cornerback Jeff Okudah earlier in the week, saying he hadn't proven himself as a shutdown corner because he was getting safety help on deep balls. Metcalf finished with seven catches for 149 yards, including two long plays while matched up with Okudah.

“Hats off to him — he's a good corner,” Metcalf said, repeating the phrase he used earlier in the week.

Okudah said he didn't see the game as a grudge match between the two.

“I don't necessarily know if there was a back and forth,” he said. “He's obviously one of the top receivers in the league. Being a competitor, I obviously want to win the one-on-one battles with him."

Campbell thinks Detroit's defensive problems might have one underlying cause. Unfortunately, it isn't one he can fix.

“I think we lack confidence — that's very clear to see,” he said. “To get that, you have to have production in games and have success. You have to stop plays and stop plays — things of that nature. We're lacking that, and it leads to us making mistakes.”