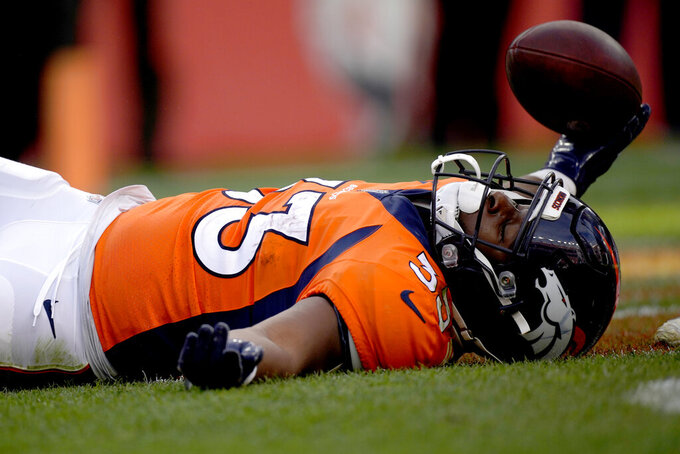 Denver Broncos running back Javonte Williams (33) celebrates his touchdown run against the Los Angeles Chargers during the first half of an NFL football game, Sunday, Nov. 28, 2021, in Denver. (AP Photo/David Zalubowski)

DENVER (AP) — Vic Fangio didn't pay much attention when the Kansas City Chiefs stumbled to a 3-4 start. All he knows is they've fixed whatever was broken, haven't lost since October and “they're back to being the Chiefs again.”

The same juggernaut that's won the AFC West every year since 2016 while piling up a cumulative 73-28 record while the Broncos had stumbled to a 38-53 mark since winning Super Bowl 50.

The Chiefs (7-4), fresh off a bye, opened as 9½-point favorites, according to FanDuel SportsBook. So, what makes Fangio think the Broncos (6-5) can go into Arrowhead Stadium on Sunday night and beat Kansas City for the first time in a dozen tries?

“ We're better than the recent Broncos teams,” Fangio said. “We got a better team.”

One that's loaded with young talent that points to a bright future in Denver, maybe even in the short term Sunday when a win would vault the Broncos into first place in the AFC West, a spot they haven't seen since Peyton Manning was their quarterback.

The Broncos had six rookies play significant roles when they thumped Justin Herbert and the Los Angeles Chargers 28-13 Sunday.

On defense, cornerback Patrick Surtain II, the ninth overall pick in the draft, had a pair of fourth-quarter interceptions, one in the end zone and the other a 70-yard pick six.

He played all 71 snaps as did inside linebacker Baron Browning, who had seven tackles, a pass breakup and a sack that was negated by a penalty, and safety Caden Sterns, who had a tackle and a pass breakup in his first career start.

Pass rusher Jonathon Cooper had a tackle and played 49 snaps while holding the edge opposite Bradley Chubb, who made his first start since recovering from ankle surgery in September.

For frustrating Joey Bosa all afternoon, Bailey earned a game ball from Fangio, which sent his teammates into a wild locker room celebration.

The 2021 draft class, led by Surtain. “The two interceptions everybody knows about, but he's broken up (a dozen) passes, too,” Fangio said. “They don't quite get the same pizzazz that the picks do, but they're just as critical.”

TE Noah Fant, the Broncos' first-round draft pick in 2019 who was supposed to be a big threat in the passing game, but whose yards per reception have gone down from 14.1 his rookie year to 10.9 last season and to 8.7 this year. On Sunday, he had three receptions for 12 yards with a long of 7.

Team president and CEO Joe Ellis, for hiring rookie GM George Paton in what is shaping up to be the franchise's biggest hire since John Elway joined the front office in 2011. Elway, the team's president of football operations, his stock is also on the rise thanks to the great financial shape he left the team in when he turned over his general manager duties to Paton.

Drew Lock has been awful in two relief appearances this season and he's thrown two interceptions in just 18 pass attempts. Lock replaced a concussed Bridgewater against Baltimore in Week 4 and was 12 for 21 — the exact same completion rate (57.14 percent) he had Sunday when was 4 for 7 and fumbled on his second snap after Bridgewater (shin) left in the second quarter before returning after halftime.

“Yeah, it's different for a guy who's never come off the bench," Fangio said. “And in Drew's case, we're probably not giving him enough reps during the week — not to make an excuse for him. But he's got to learn to do better at that and maybe some of that is we need to have a better list of what he's comfortable at operating and running and calling."

Fangio is hopeful he'll have his O-line close to full strength against Kansas City with LT Garett Bolles (COVID-19), LG Dalton Risner (back) and RT Bobby Massie (ankle) all expected back. Fangio said Bridgewater's shin wasn't an issue Monday and he also expects to get S Kareem Jackson (neck) back.

30 — snaps by Chubb in his first game since Week 2 following ankle surgery. “It was good to get out there, knock off a good bit of that rust and hopefully he'll make big strides this week," Fangio said.

— 72.7% The Broncos' best third-down conversion rate since at least 1991 when the statistic was first tracked. Denver converted 8 of 11 third-down chances.

If the Broncos can beat Patrick Mahomes for the first time in eight tries, they'll get the winless Lions and the Bengals at home the following two weeks with a chance to finally make some noise in the division.