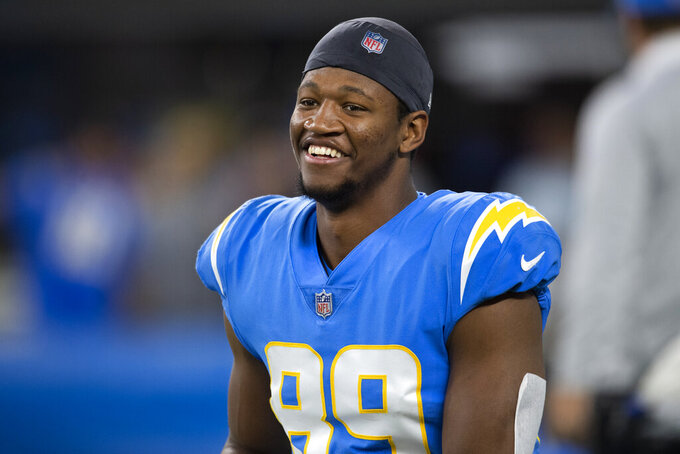 FILE - Los Angeles Chargers tight end Donald Parham (89) stretches before an NFL football game against the Kansas City Chiefs Thursday, Dec. 16, 2021, in Inglewood, Calif. Parham is participating in the offseason program and is happy to be back on the field, less than three months after he was taken off the field on a stretcher during the first quarter of a Dec. 15 game against the Kansas City Chiefs.(AP Photo/Kyusung Gong, File)

COSTA MESA, Calif. (AP) — No one would have been surprised if Donald Parham tried to ease back into things after suffering a frightening injury late last year.

The Los Angeles Chargers tight end has been participating throughout the offseason program as he prepares for the upcoming season.

Parham resumed offseason training in early March, less than three months after being taken off the field on a stretcher during the first quarter of a Dec. 16 game against the Kansas City Chiefs.

“Yeah. It was perfect timing. I came back, dove right in, and felt great,” Parham said. “I’m just taking advantage of every moment that I have back. After everything that happened, it feels good to be back, for sure.”

On a fourth-and-goal play, Parham got his hands on a 5-yard pass from Justin Herbert in the back of the end zone, but he dropped the ball when the back of his head slammed into the ground.

After the play, a camera zoomed in on Parham’s face, showing his eyes closed and mouth open. A teammate briefly tried to move Parham’s left arm, but it was frozen in a bent position.

Trainers and medical personnel removed Parham’s facemask from his helmet and placed him on a backboard. The 24-year-old’s arms were shaking while he was taken off the field as concerned players from both teams watched.

He was taken to the hospital for tests and was diagnosed with a concussion.

Parham said he remembers everything until medical personnel put him in the ambulance and that he wasn’t experiencing any pain. He also noted he has watched the play many times and has come to terms with what happened.

“It was crazy because once it happened and I was in the hospital, I was like, ‘Will I ever play again?’ That reality set in very quick,” he said. “I had to take my time and just think about if this was something that I wanted to do for the rest of my career, just making sure and take the right precautions.”

It wasn’t until a month after the injury before Parham said he felt around 100%. He was cleared to resume full workouts in early March, usually when he begins his offseason program.

The 6-foot-8, 237-pound Parham has developed into a dependable option for quarterback Justin Herbert. After having 10 catches, including three touchdowns in 2020, Parham doubled his production last season with 20 receptions for 190 yards and three touchdowns.

The Chargers added Gerald Everett during free agency, but Parham’s tall frame and prowess in the red zone still make him a vital red zone factor.

Parham’s most important focus during the offseason, though, has been improving his lower-body strength so that he can improve in run and pass blocking.

“That was something that I felt that I lacked last year. I want to be an overall tight end, not just a pass-catcher,” Parham said.

Offensive coordinator Joe Lombardi has also been pleased with Parham’s progress, but is also waiting until hitting starts during training camp and the preseason games to get a full assessment.

“He’s made some big plays out there in 7-on-7. Everything that you remember from last year, he looks confident. Everything is real positive,” Lombardi said. “We’re very excited, the tight end room is exciting between Donald, and Tre’ (McKitty), watching him improve last year, then with the addition of Gerald, I think that it’s a real strong position for us.”