Chargers safety James not practicing due to contract talks 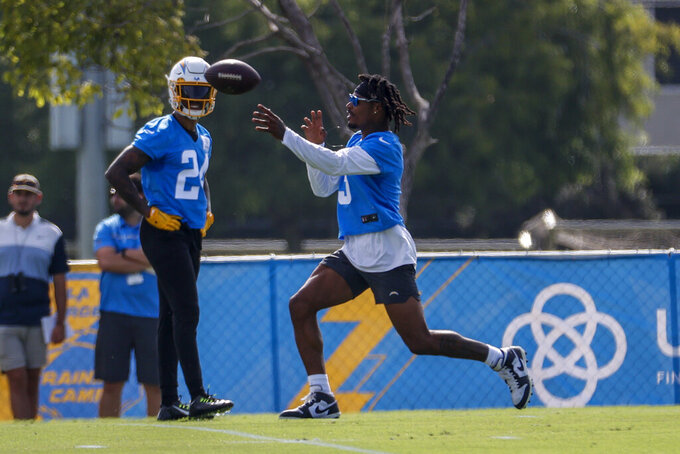 COSTA MESA, Calif. (AP) — Los Angeles Chargers fans hoping to see Derwin James practicing in his new No. 3 jersey will have to wait a little longer.

James spent most of Wednesday’s opening session of training camp on the sideline without a helmet. Coach Brandon Staley said James participated during the walkthrough portions as the team and James’ agent look to finalize a contract extension.

“I think that there is full respect on both sides. They know how much we love Derwin. Derwin knows how much we love him,” Staley said. “We’re just working through that process right now. We’re going to let it take shape, and when it does, he’ll be out there playing.

“He’s going to be working out, but he won’t be going full speed until that gets situated.”

James didn’t participate in full-speed drills during the offseason program after having shoulder surgery once last season ended, but Staley said James is cleared to go once the contract issues are resolved.

James was an All-Pro selection as a rookie before being derailed the next two seasons because of injuries during training camp. A broken foot limited him to five games in 2019, and he suffered a season-ending knee injury in 2020.

Last season James bounced back and reclaimed his spot as one of the top safeties in the league. He was the eighth defensive player and first defensive back since 2000 to have more than 100 tackles (118) after being sidelined the previous year.

James also had two interceptions, a pair of sacks and three forced fumbles. He wore No. 33 his first four seasons before switching to No. 3, which he wore during high school and college.

Contract matters in the first week are nothing new for the Chargers and general manager Tom Telesco. Three years ago, running back Melvin Gordon did not report until five weeks into the regular season after they didn’t reach an extension. In 2020, linebacker Joey Bosa became the highest-paid defensive player in the league at $135 million over five years after the two sides agreed on the day players reported.

James — the defensive signal caller in the huddle — will be counted on as the leader of a unit that made massive upgrades over the offseason. Los Angeles signed cornerback J.C. Jackson, defensive linemen Sebastian Jones-Day, Austin Johnson and Morgan Fox and edge rusher Kyle Van Noy along with trading for linebacker Khalil Mack.

The Chargers spent nearly $70 million in guaranteed salaries to improve a defense that was 23rd overall last season and near the bottom in key categories, including run defense, third down conversions and points allowed after halftime.

Mack, who has had contract situations over his nine seasons in the league, wasn’t too concerned over James not being on the field.

“Business has to come first in his situation. It is what it is. We’ve all been there,” he said.

NOTES: LB Kenneth Murray is starting camp on the physically unable to perform list as he continues to recover from ankle surgery he had in April. ... Undrafted rookie TE Stone Smartt was placed on the non-football injury list.

By Schuyler Dixon 1 minute ago
By Tom Withers 35 minutes ago
By Mark Long an hour ago
an hour ago
By Dennis Waszak Jr. 3 hrs ago