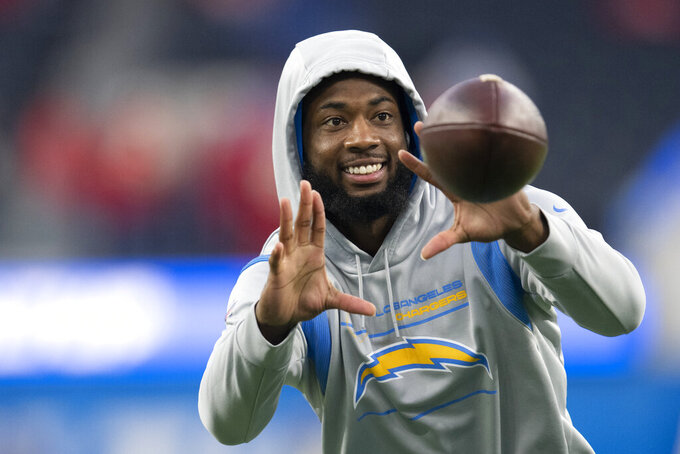 COSTA MESA, Calif. (AP) — Mike Williams will remain a valuable part of the Los Angeles Chargers' offense for the next three seasons. The wide receiver signed a three-year, $60 million extension with the franchise on Tuesday.

The extension, including $40 million guaranteed, also came on what is deadline day for teams to place franchise tags on players. Williams was the Chargers' top free agent they were hoping to retain.

The seventh overall draft pick by the Chargers in 2017 is coming off a career season when he set personal highs in catches (76) and yards (1,146). He also had nine touchdowns and averaged 15.1 yards per catch.

Williams is averaging 16.8 yards per reception over the past three seasons, tied for fifth in the league. He said at the end of the 2021 season he hoped to remain with the Chargers.

“I feel like I have built some lifelong friendships here with the guys in this organization, on and off of the field,” he said. "I like the organization, I like the people that I come to work with every day. Hopefully, things work out on both ends.”

Williams has shown versatility in his game throughout his five seasons. He was a red-zone target in 2018 before becoming more of a deep threat in 2019 and '20. Last season with a new offensive scheme installed by coach Brandon Staley and offensive coordinator Joe Lombardi, he caught more passes on short routes but also had nine receptions of at least 40 yards, which led the AFC.

Of Williams' nine touchdowns in 2021, five were go-ahead scores in the fourth quarter or overtime.

“I know that I’ve said this before, but every time he’s had an opportunity to make a play for us, he does," general manager Tom Telesco said when the season concluded. “I didn’t see this as a one-year thing with Mike this year. His second year in the league, he had 10 touchdowns. His third year, he had 1,000 yards and led the league in yards per catch. Then ... where we knew he was going to have more targets and that we were going to expand where we used him on the field, and he produced again — a career year in catches and yards.”