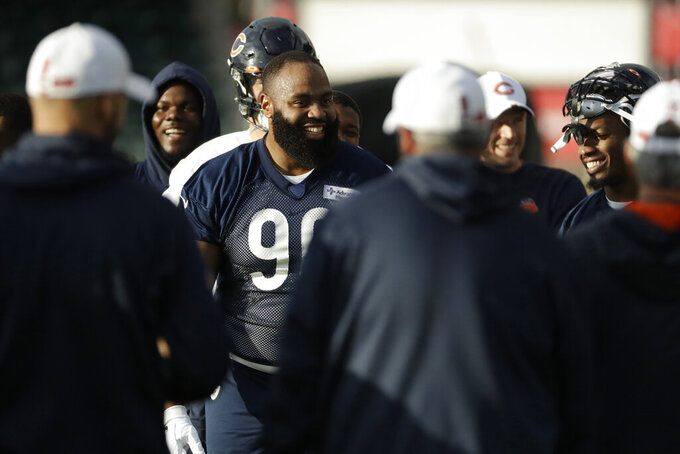 Chicago Bears' defensive end Akiem Hicks, 96, stands in a huddle during an NFL training session at the Allianz Park stadium in London, Friday, Oct. 4, 2019. The Chicago Bears are preparing for an NFL regular season game against the Oakland Raiders in London on Sunday. (AP Photo/Matt Dunham)

LAKE FOREST, Ill. (AP) — The Chicago Bears have put Pro Bowl defensive tackle Akiem Hicks on injured reserve, the latest blow on the injury front for a team trying to keep up in the NFC North.

Hicks suffered an elbow injury Oct. 6 against the Oakland Raiders. Coach Matt Nagy had suggested Hicks might return this season and putting him on IR allows the Bears to bring him back in eight weeks.

Replacing Hicks could be easier this week because the Bears (3-2) hope to have starting defensive end Bilal Nichols back in the lineup for Sunday's home game against the red-hot Saints (5-1).

Nichols has been out since suffering a broken hand in Week 2. Nichols will wear a cast to play, like outside linebacker Leonard Floyd did last year.

Earlier this week, the Bears put Pro Bowl right guard Kyle Long on season-ending injured reserve because of a hip injury. On Tuesday, the Bears signed offensive lineman Alex Bars from the practice squad to the active roster.