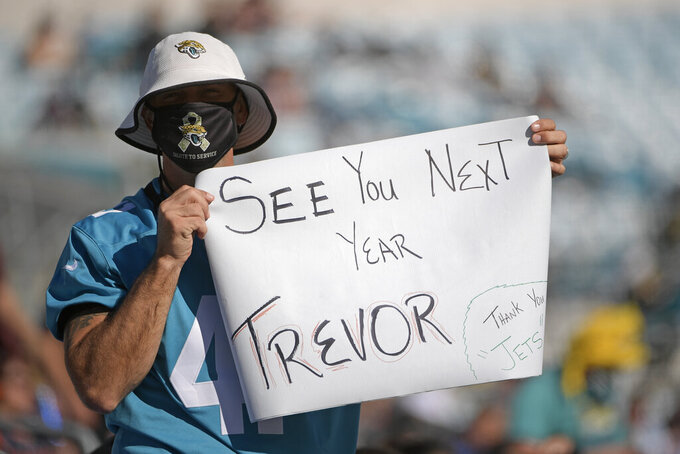 Sure, he knows Indianapolis needs help to make the playoffs. And yes, he realizes the results from three of the four other key games could be in before kickoff. Still, he wants his players to focus on the one thing they can control: beating Jacksonville.

“The relevant scores will not be up on the scoreboard," Reich said after discussing the options with general manager Chris Ballard. “It’s a potential distraction. Maybe it’s not to all guys, but if it’s a distraction to one guy that’s one guy too many. It’s just better not to have them up there."

Indianapolis could have avoided all this if it had protected a 17-point, third-quarter lead last week at Pittsburgh. Instead, the Steelers scored the final 21 points, sending Indy from sixth to eighth in the battle for the AFC's seven playoff spots.

Pittsburgh and Buffalo, both 12-3, could lend a hand as they battle for the conference's No. 2 seed. The Steelers visit Cleveland, with Ben Roethlisberger and other regulars expected to sit out, while the Bills host Miami. The Browns, Dolphins and Baltimore Ravens are all 10-5, like the Colts, but are ahead of Indy based on tiebreakers.

The Colts could still win the AFC South title if Tennessee loses at Houston.

But there is one common theme in each playoff chapter.

“Every scenario involves the Colts beating the Jags," Philip Rivers said. “That’s the only one we have a say in, so I think we have to just be focused on what we can control, find a way to get win No. 11 and don’t be distracted by all the other games."

They've lost 14 straight, already won the Trevor Lawrence sweepstakes, and may be about to embark on a major offseason overhaul. General manager David Caldwell was fired, quarterback Gardner Minshew was benched, top rusher James Robinson won't play because of an ankle injury, and coach Doug Marrone could be gone soon, too.

Marrone is just 12-35 since leading Jacksonville to the AFC championship game following the 2017 season.

“I think obviously there will be change, I don’t know (how)," Marrone said. “I’m not informed of anything like that, but obviously there’s going to be a lot of change going on. But my whole focus is try to get this win."

The Colts know this game is no gimme.

Jacksonville has won the last two in this series and five of the last seven, including a 27-20 opening-day victory. So Reich's message is simple: Tune out the noise and finish the job.

“It’s just better not to have them (the scores) up there," Reich said. “It can do nothing to add to what we have to do — focus our energy on Jacksonville."

Veteran quarterback Mike Glennon will make his second straight start and his fifth in six weeks in what is likely to be his final game with the Jags. Over the past 10 quarters, Glennon has thrown two TD passes, had six turnovers and was sacked for a safety.

“Every opportunity you get to be a starting quarterback in this league, I don’t take that for granted,” Glennon said. “You never know when this chance is going to come again.”

Glennon has played on three teams that earned the No. 1 overall draft pick. He started with Tampa Bay, which took Jameis Winston with the top pick in 2015. Glennon also was with Arizona, when it took Kyler Murray at No. 1 in 2019.

Left tackle Anthony Castonzo was scheduled to have season-ending surgery on his right ankle Thursday, leaving the Colts with a big hole for their most important game of the season.

Castonzo's top backup, Le'Raven Clark, suffered a torn left Achilles tendon earlier this year. Will Holden, who replaced Castonzo last week, has been ruled out this week with a knee injury.

The Colts appear to be a virtual lock to score 24 points for the eighth consecutive week.

Jacksonville has given up at least 24 in each of its 14 losses, an NFL record. The only time it held an opponent to fewer than 24 points this season was the Week 1 win over Indy.

“It’s been a tough year,” Jags defensive coordinator Todd Wash said. “It’s been frustrating, but at least hopefully we can go out on a good note versus Indy.”