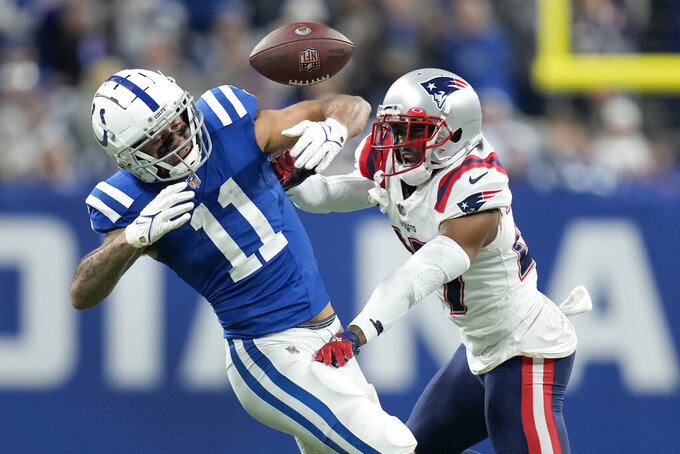 INDIANAPOLIS (AP) — Indianapolis Colts coach Frank Reich challenged his players to show everyone they were more than just a playoff contender.

Now comes the hard part — doing it each of the next two weeks against foes with playoff hopes.

The Colts certainly have been on top of their game lately.

Since starting 1-4, they've won seven of nine. Both losses came at home, in overtime to AFC South-leading Tennessee and in the final minute against defending Super Bowl champion Tampa Bay. Both also came after Indy blew second-half leads.

But if the Colts replicate what they did against New England over the next two weeks, at Arizona and at home against Las Vegas, they will finish the regular season at Jacksonville with, perhaps, a playoff spot already locked up.

Indy rebounded from its sluggish start by following a proven formula.

Jonathan Taylor is running away with the league's rushing title. The closest contender to Taylor, who has 1,518 yards, is Joe Mixon of Cincinnati at 1,094. Taylor also leads the league with 19 touchdowns with the most recent being a 67-yard scoring run that sealed the 27-17 victory over the Patriots with 2:01 left.

Defensively, the Colts continue to lead the league with a plus-14 turnover margin and are tied with Dallas for the most takeaways (31).

Add an offensive line that has allowed 94 sacks since 2018, and a team gaining more confidence by the week and the Colts are primed to continue ascending.

All they must do now is demonstrate Saturday's victory was no fluke.

“We've got to win every one of these games," Reich said. “What we said in there was, ‘Hey, this is a great team win, but this counts for one. It counts for one, that’s it.' We've got to dial it back in and get ready to play."

Punt blocks. Indy has blocked two punts in its past five games and linebacker E.J. Speed returned both for touchdowns. He's the first NFL player to achieve the feat since Baltimore safety Ed Reed in 2003 — and there are still three games remaining.

Passing game. While Taylor has shown he can carry a hefty-sized workload, the Colts probably need Carson Wentz to be more effective through the air than he was against New England. He was 5 of 12 for 57 yards with one TD and one interception Saturday.

Taylor. The second-year running back has topped the 100-yard mark eight times in 11 games and showed just how dynamic he can be Saturday. If Taylor has a scoring run in his 12th consecutive game Saturday, he'll break Lenny Moore's franchise record. He needs two total TDs to break the Hall of Famer's single-season franchise mark (20), which was set in 1964.

Michael Pittman Jr. His productivity has been fine. But after Pats safety Kyle Dugger ripped off Pittman's helmet, the two were involved in a scuffle that led to the ejection of both. Without Pittman, Indy struggled to preserve the 20-0 lead it built before he was tossed. Pittman is Indy's top receiver and he can't afford to lose his composure.

While safety Andrew Sendejo has gone into the concussion protocol, starting center Ryan Kelly could return this week after missing the past two games. He sat out Saturday after his newborn baby girl, Mary Keto, died. She was born Friday and Kelly confirmed the death in a Twitter post Monday afternoon. Following the game everyone from Reich and Kelly's teammates to Patriots coach Bill Belichick and Patriots players offered condolences.

“Nothing made me happier than being your Dad. You gave your mom and I that gift," Kelly wrote. “You were simply a miracle and always will be. I'm sorry you never got to open those sweet eyes and see us or take your first steps but you have angel wings now."

Five. After winning five of their past six and getting some help around the AFC, the Colts enter Week 16 with the No. 5 position in the conference playoff chase.

The Colts' short-handed secondary has had trouble against some of the league's top quarterbacks. Expect Cardinals quarterback Kyler Murray and productive running back James Conner to test Indy's pass defense. If the Colts defense holds up, it would be another big step.