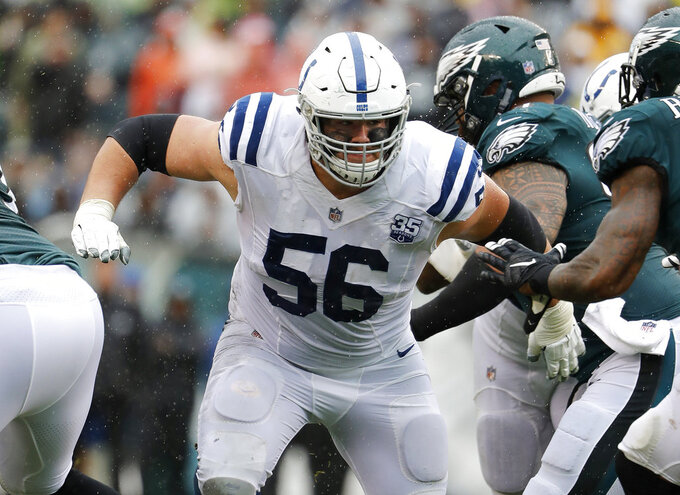 FILE - In this Sept. 23, 2018, file photo, Indianapolis Colts guard Quenton Nelson blocks during an NFL football game against the Philadelphia Eagles at Lincoln Financial Field in Philadelphia. On Friday, Darius Leonard and Quenton Nelson were rewarded for their remarkable debut seasons by becoming the second set of rookie teammates to be named first-team All-Pro. Gale Sayers and Dick Butkus were the other players to achieve the feat in 1965 and both went on to have Hall of Fame careers with the Bears. (AP Photo/Winslow Townson, File) 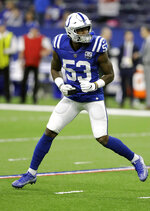 INDIANAPOLIS (AP) — Darius Leonard and Quenton Nelson made a quick impression on their veteran teammates.

The first time the Indianapolis Colts wore pads at training camp, longtime left tackle Anthony Castonzo watched Nelson, the new left guard, stop defensive linemen cold on successive plays. Andrew Luck got a glimpse of Leonard's skills when the new linebacker leapt in the air, twisted his body and picked off his pass.

The veterans knew instantly this rookie class would be different.

On Friday, Leonard and Nelson were rewarded for their remarkable debut seasons by becoming the second set of rookie teammates to be voted to The Associated Press All-Pro team. Gale Sayers and Dick Butkus were the other players to achieve first-team status in 1965, and both went on to have Hall of Fame careers with the Bears.

"In both cases they bring a lot of juice into the meeting room, into the weight room. They have infectious leadership qualities," first-year coach Frank Reich said. "Their love for the game, their love to compete at the highest level I just think is very infectious and you love their confidence to be able to just let that loose."

It happened quicker than expected.

While analysts generally regarded Nelson as a star down the road when the Colts took him No. 6 overall in April's draft, the 6-foot-5, 330-pound guard was immediately penciled into the starting lineup and started showing flashes of what he could do. When the pads went on, Nelson turned up the intensity and became a smash hit.

His nasty attitude set the tone for the Colts' offensive line, and he teamed with Castonzo and center Ryan Kelly, Indy's first-round picks in 2011 and 2016, to change the team's reputation. As a result, Indianapolis (10-6) allowed a league-low 18 sacks this season after giving up a league-high 56 in 2017. Marlon Mack rushed for 100 yards four times — the most by a Colts running back in 11 years — and the Colts reached the playoffs for the first time since 2014.

Now the honors are piling up, too.

Castonzo knew it was possible right from the start.

"The first morning (of practice) at camp, he went in and absolutely stoned somebody just locked him down. I don't even know who it was," Castonzo told the AP. "Then he did it again on the next play and you knew it wasn't a fluke."

General manager Chris Ballard became a fan after watching Leonard make 19 tackles against eventual national champion Clemson in 2016. He didn't wait long to take Leonard, selecting him with the first of four second-round picks, No. 36 overall.

Leonard's transition was delayed, too. He worked out at the combine despite a quadriceps injury, and was held out of offseason workouts when he tweaked the muscle. Naturally, Leonard felt like he was behind when he arrived at training camp. But he turned heads at camp with his interception — and never stopped.

He wound up setting a franchise-record with a league-leading 163 tackles and had seven sacks, six forced fumbles and two interceptions despite missing one game with a knee injury. He's the first Indianapolis linebacker to be voted All-Pro since Robert Mathis won the league's sacks title in 2013.

How'd he make the transition so smoothly?

"You feel behind, but you know that's when I got with coach (Matt) Eberflus and coach (Dave) Borgonzi every morning," Leonard said. "We were doing everything, just spent more time going over everything in the morning (before practice)."

Ballard issued a statement in which he took no credit for hitting the jackpot with his first two draft picks, though he certainly understands the magnitude of the feat after spending his first 12 NFL seasons in the Bears' scouting department.

"We are thrilled for Quenton and Darius and they are both deserving of All-Pro recognition," he said. "Both will also be the first to credit their teammates for the honor. That's a testament to the unique culture that has been developed in our building."