COVID-19 boosters on backburner for most pro sports leagues 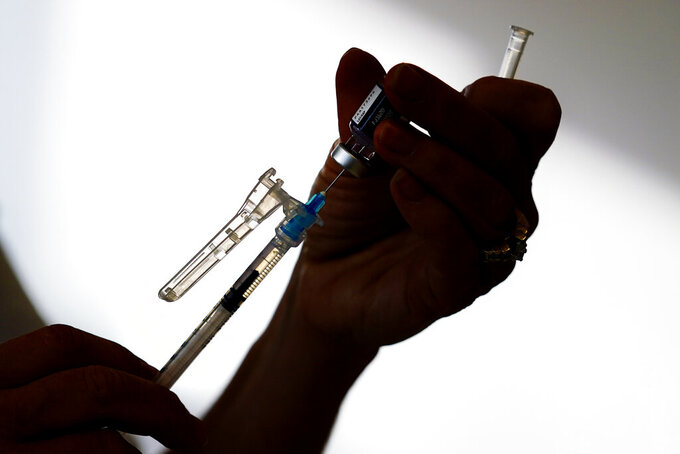 FILE - A syringe is prepared with the Pfizer COVID-19 vaccine at a clinic in the Norristown Public Health Center in Norristown, Pa., on Tuesday, Dec. 7, 2021. Amid concern about vaccines protecting against delta and omicron variants that are spreading, the push to get coronavirus booster shots is not an immediate priority in most of the top sports leagues in North America. AP Photo/Matt Rourke, File)

The push to get vaccine booster shots is not an immediate priority in most of the top sports leagues in North America even with delta and omicron variants spreading.

The NFL and NHL have no current plans to follow the NBA’s lead and require players, coaches and staff to get a COVID-19 booster shot to be considered fully vaccinated under league protocols — even as cases continue to crop up.

Five NHL games have been postponed so far this season, with two teams getting briefly shut down to quell outbreaks, and high-profile vaccinated stars like Joel Embiid and Ben Roethlisberger have missed action after testing positive. It is a far cry from 2020 when the NFL, NBA, NHL and Major League Baseball rescheduled dozens of games, but the pandemic is still proving disruptive.

NFL and NHL officials are instead touting current vaccination rates above 90% as the reason virus cases so far have largely been mild or asymptomatic. MLB is in a lockout that has cut off contact with players, but even before that there was no vaccine mandate or road map to add boosters.

The U.S. Centers for Disease Control has recommended booster shots for those 16 and older. None of the major four North American pro sports leagues has a vaccine mandate.

“We’re not at that point yet,” NHLPA executive director Don Fehr said when asked about making boosters count as being fully vaccinated for the league’s approximately 700 players. “We’re obviously in ongoing consultation with our doctors and when and if they say, ‘Look, all things considered we think this is what should be done or needs to be done or is a good idea if individuals want to do it,’ that’s what we’ll transmit to players.”

NHL Deputy Commissioner Bill Daly said a plan similar to the NBA’s had not yet been discussed. The NHL has 99.9% of players on active rosters vaccinated and is recommending but not requiring boosters.

“Obviously (boosters are) becoming more highly recommended every day, so obviously we have encouraged the clubs and the players to get boosters at their earliest possible date,” Daly said. “Whether it becomes part of the definition of fully vaccinated, I’m not sure it will or won’t. That’s going to be a decision ultimately made by the medical professionals.”

New York Islanders general manager Lou Lamoriello, whose team along with Ottawa was shut down by the NHL, said boosters were made available and the uptake was high.

“Most of our players have received a booster shot at this point,” Lamoriello said. “We had no pushback on any of our recommendations with the vaccination, whatever it might have been — whether it was Pfizer, whether it was Moderna, whether it was Johnson & Johnson. Whatever their choice was, we tried to make it available.”

The NBA told teams that those who do not receive an additional vaccine dose by Dec. 17 would be subject to stricter protocols, which can include extra testing. The league said as of this week 60% of NBA players and staff have received a booster shot.

“If you can get it, you should get it,” said Philadelphia 76ers coach Doc Rivers, whose team has dealt with a number of COVID-19 player absences. “(We should send) any good message we can send about it in doing the right thing.”

The NFL, which reports 94.4% of players are fully vaccinated, is also not yet making a booster shot part of its protocol. "Obviously the public health guidance is moving us towards embracing the boosters," chief medical officer Dr. Allen Sills told NFL Network last week.

For now, the topic is left to individual teams. Seattle coach Pete Carroll said the Seahawks scheduled a booster day for players, coaches and staff this week.

“Everybody was involved and had an opportunity and they had slots if they wanted it," Carroll said "Not everybody took advantage of it today, but a lot of people did.”

Boosters also might make business sense for leagues looking to avoid disruption, according to Dr. Stuart Ray, a coronavirus expert at Johns Hopkins who pointed to a recent study that shows an additional dose can cut the chances of being infected by 86%.

“I think it’s all upside, and boosters are very safe,” said Ray, who specializes in infectious diseases.

Still, Fehr said the NHL has “been able to cope” thus far by only postponing and rescheduling a handful of games.

Some teams have gone back to stricter protocols when a cluster of cases emerges. The Washington Capitals, who have had four players in COVID-19 protocol this season, moved to daily testing this week.

“We’re doing whatever we can, but right now we’re in it,” said coach Peter Laviolette, who added booster shots were available to players and staff who want one. “The whole world’s dealing with it.”

Daly said the NHL’s evidence has shown team outbreaks are the result of community transmission and not because the virus is being passed around the locker room like last season, before vaccines were widely available to the general public. He added there’s no evidence of team-to-team transmission, either.

“The boost really does make up the gap that we didn’t know would occur when the J&J was coming out," Ray said. "We all told people, ‘Look, the best vaccine is the one you can get,’ but now we’ve learned that the J&J vaccine’s a little less effective, but when boosted it works very well.”

After returning from his COVID-19 protocol absence, Capitals center Lars Eller said a doctor told him being vaccinated prevented his case from being more severe. In the midst of his team's outbreak, St. Louis Blues GM Doug Armstrong said he was confident in that from his own experience with the disease.

“It mitigates the symptoms, which is great and it’s still well worth getting it," he said.