Do Chargers have blueprint for a Broncos recovery? 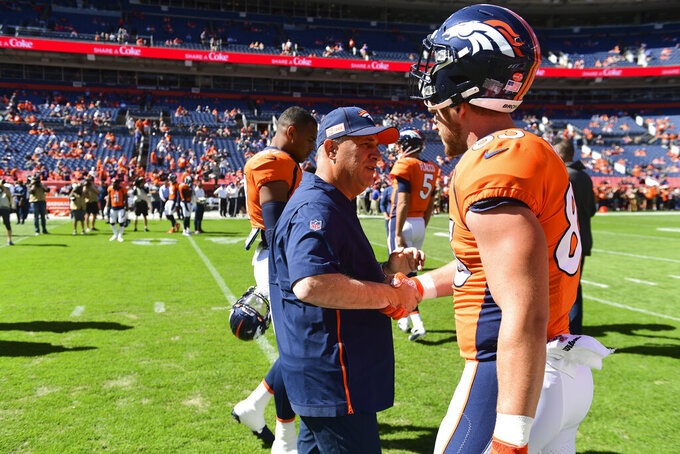 Lynn didn't panic or crumple up his game plans. He doubled down.

He "just stayed true to the process and kept reemphasizing things. At that point you need clarity and guys need to understand exactly what their expectations and standards are,” Lynn said. “As long as you do that, it's going to turn. I knew then it was going to turn and I'm pretty sure Vic knows it's going to turn with this squad.

“I'm just hoping that it doesn't turn this week."

The Broncos travel to Los Angeles (2-2) on Sunday aiming to snap an eight-game skid overall and avoid the first 0-5 start in franchise history.

Lynn’s first team recovered from its 0-4 stumble to finish 9-7. The Chargers parlayed that into a 12-4 record last season, ending a five-year playoff drought and beating Baltimore in the wild-card round.

Lynn is 24-10 since his dismal start, shepherding the kind of quick turnaround John Elway was hoping for from Fangio, a 61-year-old rookie head coach who’s designed some of the league’s best defenses for three decades.

Like Lynn, Fangio said he's sticking with his approach as he maneuvers his flustered, hard-luck team through a maze of issues, chief among them rising star Bradley Chubb’s season-ending knee injury .

“There are no pity parties in the NFL, we've just got to keep going," Fangio said. "The losses are our own doing. Injuries don't have an effect on those."

Fangio is keeping the faith like Lynn did, insisting Denver has the talent for a turnaround.

Philip Rivers said he, too, saw similarities to the '17 Chargers when he was studying film this week of his AFC West nemesis _ against whom he’s just 4-12 since 2011.

“Golly, they could very easily be sitting there 2-2 or 3-1 just the way these games have gone," Rivers said. "And that's much like our start in '17 when ... there were just some crazy kinds of things. You look up and you're 0-4 and you know you're better than that. And I know what we see on tape is a good Denver Broncos team.”

Even without Chubb, who tore his left ACL on Sunday.

“You hate it for him because he was off to a heck of a start,” Rivers said. “He and Von Miller together is as good as it gets. You never like to see a guy get hurt, but there is no making it easier with Von Miller. What the guy does play in and play out in the run and the pass is awesome.

“Some people asked me today, 'How's Von looking?' Shoot, he looks like Von."

The Broncos will replace Chubb with a rookie rotation of Malik Reed and Justin Hollins and they signed ex- Chargers linebacker Jeremiah Attaochu this week when Chubb went on IR.

“They're getting a good pass rusher, a good speed rush guy off the edge," Rivers said.