Dolphins CB Howard reports to camp but wants to be traded 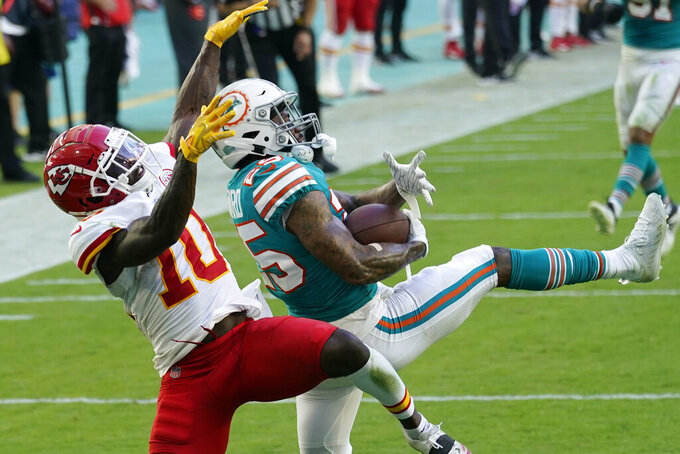 MIAMI GARDENS, Fla. (AP) — Miami Dolphins All-Pro cornerback Xavien Howard reported for the start of training camp to avoid being fined, and then said he doesn't feel valued or respected by the team and has requested a trade.

Howard skipped mandatory minicamp in June and is unhappy with the $75.25 million, five-year extension he signed two years ago. He decided not to sit out training camp, but posted a statement on social media Tuesday night saying he wants to play elsewhere.

"I’m not happy, and have requested a trade,” Howard's statement said. “Until that trade happens I am just here so I don’t get fined, and will handle myself like professionals do.”

Last year, Howard had 10 interceptions, the most in the NFL since 2007. He also led the league with 20 passes defended.

“I signed an extension that I'll admit I didn’t completely understand or feel comfortable with,” Howard said. "Everyone knows I've significantly outperformed that deal. I’m one of the best cornerbacks in the NFL. ... Yet, I’m the second highest paid cornerback on my own team, and it’s not even close.”

Howard said he hasn't asked for a completely new contract, but has made salary cap-friendly proposals such as more guaranteed money.

“The Dolphins refused everything we proposed,” Howard said. "I don’t think the organization has dealt with me in good faith.”

Coach Brian Flores declined to talk about any negotiations or trade possibilities regarding Howard.

“Those conversations, like always, are going to be internal and confidential,” Flores said hours before Howard’s statement was posted. “But we’re excited to have him. I’m excited to work with him. He’s a great player.”

The dispute creates a major issue for Flores at the start of his third season in Miami. The Dolphins doubled their win total to 10 last year but missed the playoffs for the fourth consecutive season.

Flores said all 90 players on the roster reported for conditioning tests at the Dolphins' new $135 million training camp next to their stadium. The first practice is Wednesday.

Flores declined to say how many of his players have received the COVID-19 vaccine, and said he will not pressure unvaccinated players.

“Everyone has their own personal reasoning and beliefs behind getting vaccinated or not,” he said. “I respect everyone’s choice in that matter. I'm not going to pressure anyone. I'm just going to give them the information. I'm not going to judge anyone’s commitment to the team.”

“It's up to every guy what they want to do," said Wilkins, a defensive tackle. “You've got to respect people's opinions to do things or not do things.”

While the Dolphins had perfect attendance on reporting day, receiver Preston Williams remains slowed by a foot injury that forced him to miss the final eight games of 2020. He'll begin camp on the physically unable to perform list and spend a lot of time in the new state-of-the-art training room.