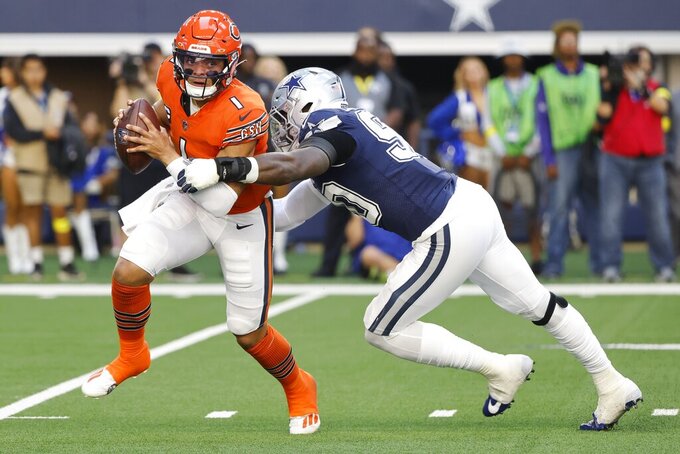 LAKE FOREST, Ill. (AP) — The Miami Dolphins boast the highest-rated passer in the NFL and the most productive pair of receivers.

They're stringing together wins and have reinforcements after making some trades before the deadline they hope will help them make a deep playoff run.

It's fair to say things are looking good for Miami heading into their matchup against the Chicago Bears on Sunday.

The Dolphins (5-3) have won two straight since Tagovailoa returned from a concussion, rallying to beat the struggling Detroit Lions 31-27 last week. The oft-criticized quarterback leads the NFL with a 112.7 rating — 3.2 points higher than Kansas City's Patrick Mahomes.

The Dolphins then gave their pass rush a boost when they acquired Bradley Chubb from Denver for their 2023 first-round draft pick before Tuesday's trade deadline. Miami also landed running back Jeff Wilson Jr. in a trade with San Francisco.

Chicago (3-5) could be in for some rough Sundays, particularly on defense after two big trades in the past two weeks. But the offense is at least showing progress.

The Bears have scored a combined 62 points the past two weeks in a win at New England and loss at Dallas. Quarterback Justin Fields has looked more comfortable passing out of a moving pocket and having more designed runs called for him.

And now, he has a new downfield weapon.

The Bears acquired receiver Chase Claypool from Pittsburgh to help balance an offense that leads the NFL in rushing and ranks last in passing.

For the defense, it's a different story.

“The thoughts go through your head like, ‘What are we playing for?’ Is their vision still the same as the players?'” safety Eddie Jackson said. “We’re trying to make it to a Super Bowl, get to the playoffs, things like that.”

Jackson said he appreciated Poles and coach Matt Eberflus addressing the team's leaders in the wake of the Smith trade and explaining the thinking behind those moves.

Fields, meanwhile, insisted the Bears aren't checking out on this season.

The Dolphins added Chubb, the former Broncos’ star outside linebacker, at the trade deadline not just to be a difference maker on their defense, but a season-altering piece to solidify their hopes of contending for a Super Bowl.

The combination of Chubb and Jaelan Phillips, Miami’s talented second-year linebacker, is expected to help a defense that has struggled to generate pressure without blitzing.

“What another edge rusher, especially of his quality, can add to the defense, it can make our team that much better,” said Dolphins coach Mike McDaniel, adding that it affects all the defensive position groups. "It’s all collective."

McDaniel said Chubb, who has 5½ sacks this season, will play Sunday, though he doesn’t yet know how much.

Fields set a career high for the second time in four games last week against Dallas with a 120 passer rating.

He was 17 of 23 for 151 yards and two touchdowns. He also ran for 60 yards and a score. In the win at New England the previous Monday night, Fields threw for 179 yards and a touchdown and ran for 82 yards and another score.

Tyreek Hill and Jaylen Waddle have been the most productive receiving duo through the first half of the season, and their ability to get open downfield has made Miami’s offense one of the league’s most efficient. Hill leads the league in receiving with 961 yards and Waddle is fourth with 727.

The duo has five of the NFL’s top 10 single-game receiving totals this season, and their 1,688 combined receiving yards is the most in league history by a pair of teammates in their team’s first eight games.

UP FOR THE CHALLENGE

Bears cornerback Jaylon Johnson was ready to embrace the task of facing two of the NFL's most productive receivers.

“A hundred percent. Everybody says and argues that he’s (Hill) one of the best in the league. And Jaylen Waddle’s been extremely productive," he said. "He’s working his way up that list as well. I look forward to these prime matchups.”

The Bears could join the 1976 Steelers as the only teams in the Super Bowl era to rush for at least 225 yards in four straight games.

Chicago had 240 last week, after running for 237 in a loss to Washington and 243 in a win over New England.