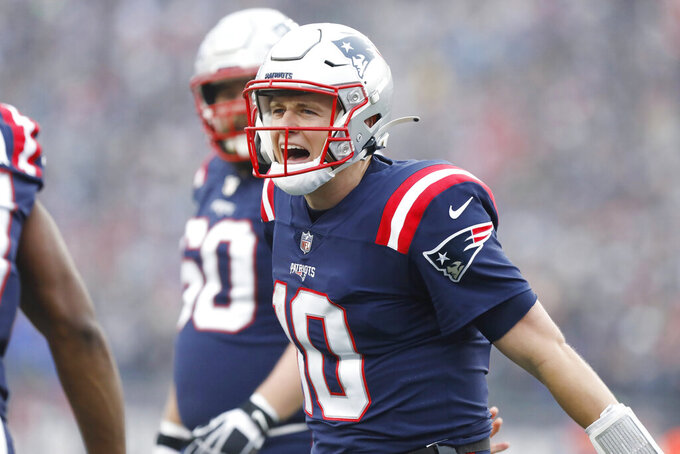 BETTING LINE: Patriots by 6.5, according to FanDuel SportsBook.

TURNOVER DIFFERENTIAL: Patriots plus-10; Dolphins minus-3.

PATRIOTS PLAYER TO WATCH: K Nick Folk has made 54 consecutive field-goal attempts from inside of 50 yards, two away from matching the NFL record held by Ryan Succop. Folk’s last miss from inside of 50: against Miami on Sept. 13, 2020, a 45-yarder on the last play of the first half.

DOLPHINS PLAYER TO WATCH: WR Jaylen Waddle is on the cusp of milestones. He’s one catch away from 100 on the season, two catches from matching Anquan Boldin’s NFL record for receptions by a rookie, and 12 yards away from the 1,000 mark.

KEY MATCHUP: Miami QB Tua Tagovailoa vs. the Patriots' secondary. If he has a big day against a highly ranked defense like New England’s — particularly with the Patriots still having much to play for — that would be quite the message for Tagovailoa to send Miami going into the offseason.

KEY INJURIES: Patriots S Kyle Dugger missed the first practice of the week with a hand issue. WR Nelson Agholor returned to practice Wednesday for the first time since sustaining a concussion in their Week 15 loss at Indianapolis. The Dolphins are relatively healthy entering their finale.

SERIES NOTES: The Dolphins are seeking a third consecutive win over the Patriots, which would be a first for Miami since a five-game streak spanning 1999 through 2001. ... The last three matchups have had a combined points total of 33, 34 and 32, respectively. ... The Dolphins are the only AFC East team with a winning home record (12-9) vs. the Patriots during the Bill Belichick era in New England. Buffalo is 3-19 and the New York Jets are 5-17 when the Belichick-led Pats come to town. ... In a quirk, this is the first season since 1996 that neither Dolphins-Patriots game will have a 1 p.m. kickoff. Both were 4:25 starts this season.

STATS AND STUFF: New England is in position to allow the fewest points in the NFL for the second time in the last three years. The Patriots will be in the top 10 in that category for a 10th consecutive season. ...Patriots QB Mac Jones is one of seven quarterbacks to have a five-touchdown, zero-interception game at Hard Rock Stadium as a college or NFL player. He did it in last year’s College Football Playoff national championship game for Alabama against Ohio State. ... Including playoffs, Patriots coach Bill Belichick has a losing road record against six teams: Miami (9-12), Pittsburgh (6-9), Denver (5-8), Detroit (2-4), Kansas City (2-4) and Seattle (1-3). ... The Patriots enter this week having allowed 26 sacks, tied for second fewest in the NFL behind Tampa Bay (22). The Dolphins’ defense has 46 sacks, tied with Chicago for third most in the NFL behind Pittsburgh (52) and the Rams (47). ... Dolphins TE Mike Gesicki has 71 catches this season, two shy of matching Randy McMichael’s team record for tight ends set in 2004 (in 16 games). ... Dolphins QB Tua Tagovailoa enters this week with a 67.8% completion rate, the second-best in team history among those with at least 2,000 yards in a season. He trails only Ryan Fitzpatrick (68.5% in 2020) in that department. ... Because of the new 17-game schedule, some teams get nine home games. Miami is playing nine games at home this season for the first time since 2008. The Patriots, meanwhile, have played at least nine home games — including postseason matchups — in 17 of the last 19 seasons.