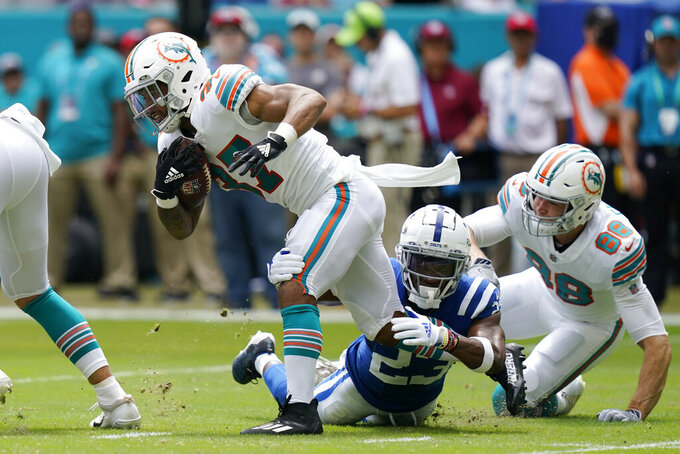 MIAMI GARDENS, Fla. (AP) — Different week, same story. When the Miami Dolphins got desperate, they could move the ball. Otherwise, they couldn’t.

And a season that started with so much promise with a win at New England is already in trouble.

Miami lost to Indianapolis 27-17 on Sunday after managing just three points in the first three quarters — and that field goal came only after the Colts muffed an early punt and gave the Dolphins a short field to work with. By the time quarterback Jacoby Brissett and Miami got anything to click on offense, the deficit was too much to overcome.

“Offensively, just couldn’t get anything going,” said Dolphins coach Brian Flores, whose team has now dropped three straight. “Got it going a little bit late, but too late. And it’s not enough. We’ve got to do a better job earlier in the game, which we’ve talked about, but we’re not able to do it.”

Indianapolis led 17-3 after three quarters Sunday, stretching that to 20-3 on a field goal early in the fourth.

That’s when the Dolphins — who didn’t have a single play longer than 18 yards in the first three quarters — opened things up. Miami’s four longest plays of the game came in the final 13 minutes, with Brissett hitting DeVante Parker with passes of 42 and 25 yards, plus finding Mike Gesicki with a pair of 22-yard throws.

The Dolphins (1-3) can’t figure out why the first three quarters aren’t like the fourth.

“One little mistake,” offensive lineman Jesse Davis said, “and it can all go to hell.”

This is now a two-game issue for Miami. When adding up the fourth quarters against Las Vegas last week and against Indianapolis on Sunday, Brissett is 21 of 27 passing for 212 yards and two touchdowns, all of which computes to a stellar quarterback rating of 124.1.

Take his first three quarters from each of those games, add them up, and it comes out to 27 of 43 passing for 164 yards and no touchdowns, a brutal quarterback rating of 70.3.

“It’s frustrating,” Brissett said. “And it’s all on us. We’re putting our defense in bad situations and things of that nature. It’s frustrating and we’ve got to find a way to stop the bleeding.”

The Dolphins are 31st in the 32-team NFL in yards per game through four weeks, and all the struggles most certainly aren’t on Brissett — who has played most of the last three games because starter Tua Tagovailoa was injured in the first quarter of a Week 2 loss to Buffalo.

Miami managed only 35 rushing yards against Indianapolis, a team that was allowing 140 per game on the ground in the season’s first three weeks. The Dolphins were 3 for 11 on third-down chances, lost the time of possession battle by a big margin — 37 minutes to 23 — and are managing only 15.5 points per game.

“I’ve got to do a better job of figuring out a way to help us play better than that, but we also got to play better, and we’re out there taking turns making mistakes in all three phases, and it’s not enough,” Flores said. “It’s not good enough.”

By Teresa M. Walker 25 minutes ago
an hour ago
By Dave Skretta 3 hrs ago
By Steve Reed 5 hrs ago
By Mitch Stacy 5 hrs ago