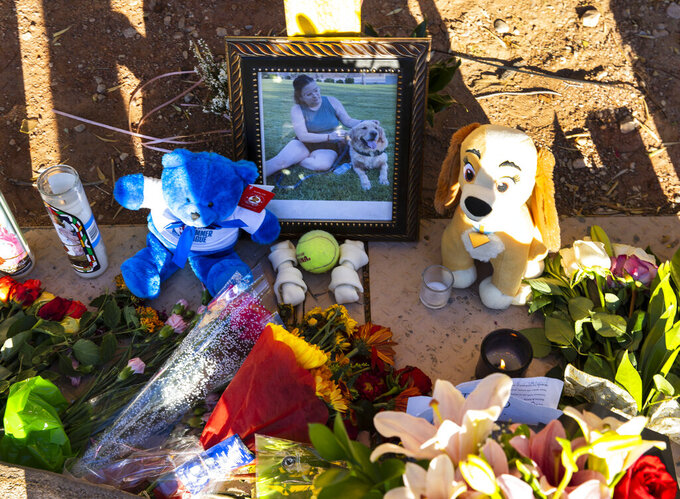 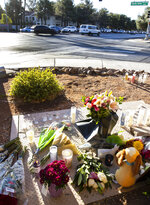 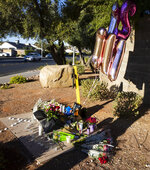 LAS VEGAS (AP) — The family of a Las Vegas woman who died in a fiery crash that authorities say former Raiders player Henry Ruggs III caused after driving 156 mph with a blood-alcohol level twice the legal limit in Nevada said Thursday they are devastated.

Tina Tintor “lived in Las Vegas since she was a baby” and loved her 3-year-old golden retriever, Max, who also died in her car following the pre-dawn Tuesday crash, her family said in a statement issued by attorney Farhan Naqvi in Las Vegas.

“Tina’s tragic loss has devastated her family beyond a grief they could ever comprehend,” the statement said. “The Tintor family appreciates privacy as they mourn. May Tina rest in peace.”

A longtime friend, Bojana Filipovic, said separately she was with Tintor early Tuesday, walking Max and talking about going to Serbia. Filipovic said Tintor dropped her off at her home before the crash.

Both 23 years old and immigrants from the Balkan country, Tintor and Filipovic became friends as neighbors in Las Vegas when they were 5, Filopovic told Fox5 KVVU-TV in Las Vegas.

“She was just about to get her citizenship, and everything was going swell,” Filipovic said. “She’d give you a shoulder to lean on, and she’ll always slap sense into you if you do something wrong. I wish I got to say goodbye, and I’ll see you in the next life.”

Filipovic did not immediately respond Thursday to a telephone message from The Associated Press.

Police and prosecutors say Ruggs’ Chevrolet Corvette slammed into the rear of Tintor’s Toyota Rav4 on a residential boulevard at 3:39 a.m. Tuesday, rupturing its fuel tank and igniting a fire. The speed limit in the area is 45 mph (72 kph).

Ruggs and his girlfriend, Kiara Je’nai Kilgo-Washington, were injured in the Corvette. Both were hospitalized before Ruggs was booked later Tuesday into the Clark County Detention Center in Las Vegas.

The Raiders fired Ruggs from the team late Tuesday, hours before he appeared before a Las Vegas judge who set bail at $150,000 pending the filing of felony charges of driving under the influence of alcohol resulting in death and reckless driving.

Ruggs’ blood-alcohol, measured at the hospital, was 0.16%, a prosecutor said.

During an initial court appearance Wednesday, the 22-year-old former first-round NFL draft pick was seated in a wheelchair with a foam brace on his neck and jail guards at his elbows. He wasn’t asked to enter a plea.

The extent of his injuries was not disclosed, although Clark County District Attorney Steve Wolfson said outside court he believed Ruggs suffered a leg injury.

Ruggs later posted bond and was freed to house arrest and electronic monitoring pending his next court date Nov. 10.

Kilgo-Washington, 23, suffered a serious arm injury that Wolfson said will lead to a second charge of DUI causing substantial bodily injury at the Nov. 10 hearing.

Wolfson said he might also file a weapon charge against Ruggs stemming from the discovery of a loaded handgun on the floor of the wrecked Corvette.

Tintor and her dog perished in the burning Toyota, authorities and witnesses said.

A police report said several people told investigators they saw the speeding Corvette, heard a loud crash and tried to rescue Tintor. But they were turned back by heat, flames and smoke.

Tony Rodriguez, a motorist who stopped to help, told KTNV-TV that someone used a fire extinguisher, but the fire grew quickly.

A security guard from a nearby condominium community told police he was forced back by heat and flames.

A neighbor told police a Dodge Durango SUV arrived and parked behind the Corvette moments after the crash, and several people got out of the SUV and left. Police and prosecutors have not said who was in that vehicle. Wolfson said Wednesday the investigation was continuing.

Rodriguez told KTNV he tried to cut Tintor’s seat belt and grab her by the shoulders, but she was stuck in the driver's seat.

“Everything we tried just wasn’t working,” he said. “The seat belt was on, the air bags were in the way and the door was jammed.”

Filipovic told KLAS-TV that Tintor graduated from Durango High School in Las Vegas and hoped to go into the computer science programming field.

Goran Glavas, president of St. Simeon Serbian Orthodox Church in Las Vegas, released a statement calling Tintor “always polite and respectful just like rest of her relatives and friends." He said the Serbian community in Las Vegas was “extremely saddened by this terrible accident.”

Filopovic told KLAS that Tintor’s mother called her Tuesday morning, crying and asking if she knew where Tintor was.

“She was supposed to wake up at 7 a.m. to run errands, but she never got home with her dog," Filipovic said.

This story has been updated with a statement from an attorney Tina Tintor's family and to correct the name of her dog, Max, not Maxi.