Giants' first trip to the playoffs since 2016 within grasp 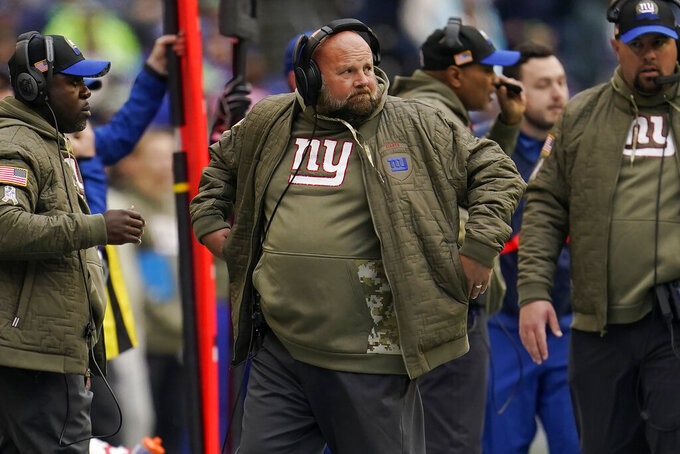 New York Giants head coach Brian Daboll watches from the sideline during the first half of his team's NFL football game against the Seattle Seahawks in Seattle, Sunday, Oct. 30, 2022. (AP Photo/Marcio Jose Sanchez) 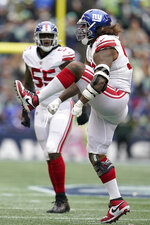 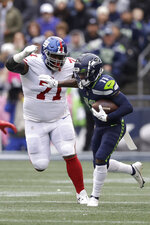 EAST RUTHERFORD, N.J. (AP) — Joe Schoen was able to walk around his new neighborhood in New Jersey in relative obscurity after being named the general manager of the New York Giants in January.

The 43-year-old had been out of the spotlight as the Buffalo Bills assistant GM the previous four seasons, and there was nothing special that made the former quarterback and wide receiver from DePauw University stand out.

Schoen can't get away with that any longer. The Giants are one of the biggest surprises in the NFL as they head into a bye week with a 6-2 record and a real shot at making the playoffs for the first time since 2016.

Schoen was in a hardware store recently with his wife and noticed a man looking at him several times as he went from aisle to aisle. It was a little creepy until the man walked up and asked him: ‘Are you Joe Schoen? Can I get a picture with you?’

“And then I realized that it’s hard to get used to being out and being recognized. I’m not used to that,” Schoen said. “I haven’t gotten used to that. But it’s a lot better than booing or cussing you or throwing things at you. It’s been great so far. That’s hard for me to get used to for sure.”

Since taking over for the fired Dave Gettleman in January, Schoen has pushed all the right buttons in taking over a team that went 4-13 under Joe Judge in 2021.

It started with hiring Bills offensive coordinator Brian Daboll to replace Judge. Schoen followed that with tough salary cap decisions, terminating the contracts of star cornerback James Bradberry in the spring, while making a couple of cost-effective free-agent signings to rebuild the offensive line and provide depth at other positions.

“What I’ll tell you about our team is there’s a lot of tough dudes that care about each other and love football,” he said. “I thought we had some tough guys, I knew we had some competitive guys. I knew we had some good players, just you never know how those guys are going to gel.”

The Giants have been resilient and their biggest players have stepped up when needed.

Quarterback Daniel Jones is playing his best football after Schoen decided not to pick up the fifth-year option on his rookie contract. Running back Saquon Barkley is healthy again after an ACL injury early in 2020, and he is among the league leaders in rushing. Wink Martindale's defense is finding ways to confuse opponents and limit their scoring.

With three more wins, the Giants can guarantee their first winning season since 2016. With four or five wins in the last nine games, a playoff berth is likely.

Daboll set the tone for the season in the opener against Tennessee. Saying the Giants weren't going to play scared, he went for a 2-point conversion and a win with 1:06 in the game. The conversion was successful, and the Giants would go on to win three more in a row after trailing in each fourth quarter.

In all eight games, including the losses to Dallas and Seattle, New York has been tied at some point in the fourth quarter.

Jones, who has led five game-winning drives, and Barkley have been the keys for coordinator Mike Kafka's offense.

Jones has thrown for 1,399 yards, six touchdowns and hit a career-high 65% of his passes. He has only turned the ball over four times, and two of those were meaningless plays at the end of the first half.

What's also important to note is the Giants have won despite injuries. They have used 12 players who were not on the roster in September.

The Giants' margins of victory have not been big. Their six wins have been by a total of 27 points. For the season, New York is plus six in scoring differential.

“That’s what it’s kind of been for us," safety Julian Love said. “Yeah, we want to be winning by more and all that stuff, but at the end of the day, if we win by one or we win by 30, a ‘W’ is a ‘W.’ That’s kind of been our mindset. Is it sustainable? Yeah, because it’s really based off of all the fundamentals of being successful at football.”

And that's what Schoen and Daboll brought from Buffalo.